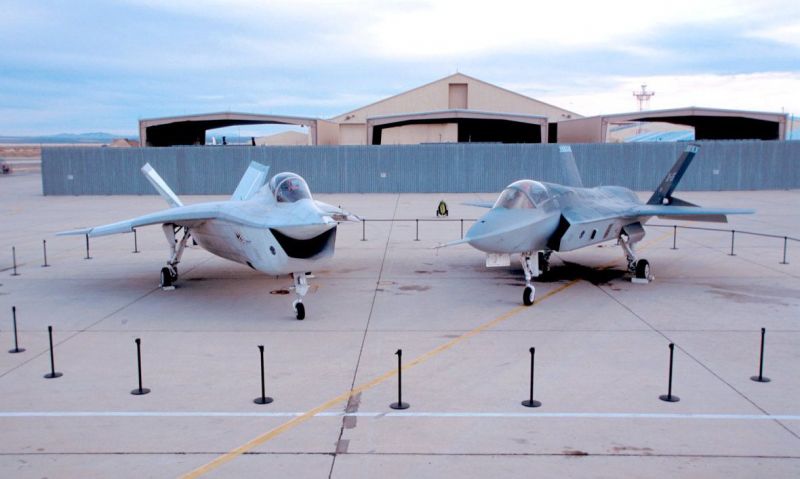 The Boeing X-32, left, and the Lockheed X-35 competed for the DoD contract to produce the Joint Strike Fighter (JSF) in 1997. Lockheed won the competition, which would eventually produce the F-35 Lightning II.

Recent news reports about the F-35 Joint Strike Fighter underscore the dividends and drawbacks of the massive, multinational effort to deploy a fifth-generation stealth fighter-bomber across more than a dozen allied and partner militaries.

On the negative side, hundreds of F-35s were temporarily grounded in August due to an ejection-seat issue. That had the effect of hamstringing a not-insignificant portion of U.S. and allied deterrence operations. But on the positive side, the new aircraft is showing off its versatility, capability, interoperability and adaptability in virtually every theater of operations.

The F-35’s versatility is perhaps best highlighted by the U.S. military’s plans for – and use of – the airframe.

The Air Force is deploying the F-35A variant. The Air Force's fleet of F-35As (302 airframes at the beginning of fiscal 2022) already represents the second-largest fighter-jet fleet in the branch's inventory, as Military.com reports. Although the F-16 (934 airframes) still holds the top spot in the flying branch by a wide margin, that gap is rapidly closing. The Air Force plans to procure 1,763 F-35As.

The Navy is deploying the F-35C variant from aircraft carrier decks. The F-35C features beefier wings and stronger landing gear than its sister variants, allowing it to handle the rigors of supercarrier operations.

The Marine Corps is deploying the VSTOL F-35B variant from amphibious-assault carriers and austere land-based runways.

Known as “Lightning IIs,” F-35 variants are now on station at sea and at airbases around the world – from Eastern Europe to South Korea, the Arctic to Australia, the Indo-Pacific to Israel.

Japan, for example, is basing F-35Bs on Kyushu, the southernmost of Japan’s four main islands. The F-35B’s capabilities allow Japan to deploy the fighter-bomber from remote island bases or small-deck carriers.

Israeli and U.S. F-35s are prowling the skies of the Middle East.

F-35s from several NATO nations are playing a lead role in the alliance’s Air Shielding Mission over the Baltics and other parts of Eastern Europe.

The growing mix of F-35s and F-22s stationed at airbases in Alaska means the 49th state boasts America’s largest concentration of fifth-generation warplanes. That should give Americans and our allies some peace of mind – and our enemies pause – since Alaska serves as a sentry point for Indo-Pacific and Euro-Arctic threats. And soon those U.S. fifth-gen assets will be joined by fifth-gen airframes out of Canada, which recently selected the F-35 to replace its legacy fighter-jets.

The F-35 brings together stealth capability, an array of advanced sensors, information-fusion and networking capabilities, supersonic speeds and maneuverability. All of this makes the F-35 a highly survivable force-multiplier capable of operating in contested environments.

The main tool the F-35 brings to the battlespace is that suite of sensors and information-fusion technology. As Lockheed Martin proudly puts it, the F-35 is “more than a fighter jet” because of its “ability to collect, analyze and share data.” This ability to sweep up and then disseminate vast amounts of information “is a powerful force-multiplier that enhances all airborne, surface and ground-based assets in the battlespace.”

Lt. Col. Yosef Morris, a Air Force F-35A pilot, agrees. “We have the ability to gather, fuse and pass so much information that we make every friendly aircraft more survivable and lethal.”

Although the F-35 has been in service for only about six years, it has already been used in at least six combat operations. The warplane first saw combat when Israeli F-35s conducted ground strikes in 2018. Air Force F-35s conducted their first combat action a year later, when a pair of F-35As hit a network of ISIS tunnels and weapons depots in Iraq. Just a few months after that, Marine Corps F-35Bs conducted operations in Afghanistan.

During a recent 18-month deployment in the Middle East, 42 F-35As flew 1,319 sorties, delivered 352 precision-guided weapons and fired 3,774 rounds from their canon systems.

In the wake of Vladimir Putin’s assault on Ukraine in February, the United States rushed F-35s to “several operating locations along NATO’s eastern flank,” according to the Pentagon. Dutch F-35s have been dispatched to Bulgaria. And the White House announced in June that the Pentagon is basing two additional squadrons of F-35As in Britain.

When Xi Jinping rattled sabers over Speaker Nancy Pelosi’s stopover in Taiwan – which was nothing more than a democratic leader visiting a peaceful, democratic nation – USS Tripoli, USS America and their swarm of F-35Bs joined USS Ronald Reagan in the region to underscore the U.S. commitment to deterring war.

The F-35 is increasingly working “across services and across alliances,” according to Lt. Col. Ryan Worrell, commander of the 356th Fighter Squadron. As he explained in an interview with Air Force Magazine, Air Force and Marine Corps F-35s are teaming up in mixed formations, as are U.S. and Australian F-35s.

Even more noteworthy, U.S., British and Italian F-35Bs all deployed from the same carrier recently. The multinational training operation was conducted from HMS Queen Elizabeth in the Mediterranean Sea. The exercise proved the plane’s “tactical agility and strategic advantage to NATO,” according to Royal Navy Commodore Steve Moorhouse. The British fleet will soon have a second aircraft carrier bristling with F-35Bs: HMS Prince of Wales.

In a surprise reversal spurred by Russia’s invasion of Ukraine, Germany announced plans to purchase F-35s. As Defense News reports, the German air force will deploy 35 Lightning IIs by 2030. “There is only one response to Putin’s aggression: unity within NATO and a credible deterrent,” German Air Force Chief of Staff Lt. Gen. Ingo Gerhartz said. “That’s why there is no alternative to the decision in favor of the F-35.”

As mentioned, Canada also chose the F-35 to replace its aging fleet of F-18s, announcing just weeks after Putin’s assault on Ukraine the decision to acquire 88 F-35s.

NATO members could have as many as 450 F-35s stationed across Europe by 2030, Military.com reports. “That's a tremendous capability,” says Air Force Gen. Tod Wolters, who served as NATO's military commander from 2019 to 2022. “If I were a potential foe against NATO or Europe, I wouldn't like to hear that.”

Japan is acquiring a fleet of 157 F-35s, Australia 72, South Korea 60. All told, more than 750 F-35 variants are already on duty across some 30 bases and warships around the world. In a very real sense, the F-35 has become the free world’s fighter jet.

Given how the United States, Australia, Britain and Italy are integrating and using the F-35, we can expect the free world to develop and discover more ways to exploit the F-35’s nation-to-nation, mil-to-mil and service-to-service interoperability.

F-35 industry partners note that packages of Air Force F-35As have flown from frigid Alaska to sweltering Guam – literally from -30 degrees to 85 degrees on the same deployment.

The plane is also adaptive when it comes to how it’s deployed. To fill gaps created by supercarriers docked for repairs or still in production, the Navy and Marine Corps “are rapidly warming to the … ‘lightning carrier’ concept, designed to pack amphibious ships with Marine Corps F-35Bs and sail them to the hotspots to cover places the big decks aren’t,” Breaking Defense reports. As noted, that’s exactly what happened in response to Beijing’s post-Pelosi tantrum.

Although they can’t do everything a full-fledged supercarrier can do, these “lighting carriers” provide nine extra platforms for deploying stealth fighter-bombers – without any need for permission from a host nation. This almost doubles the U.S. flat-top fleet and significantly enhances U.S. maritime deterrent power. As one Navy official puts it, “lightning carriers” can “sting” the enemy.

Following the U.S. playbook, Japan is upconverting two warships originally built to carry helicopters – the Izumo and Kaga – into small-deck aircraft carriers that will deploy F-35Bs. Marine Corps F-35B planes and crews are pitching in to test the retrofitted ships.

In addition, South Korea is planning to build an aircraft carrier for some of its F-35s.

The efficiencies, economies of scale and synergies that will flow from such a huge multinational fleet – and a truly global production line – will be enormous. Even so, sometimes trying to build an airframe to meet the needs of multiple branches proves a difficult task. The F-111, for instance, never quite delivered on the promises its advocates made to both the Air Force and the Navy.

Time will tell if the F-35 Joint Strike Fighter lives up to its name as an airframe equal to the demands of a truly joint force. But the F-35 seems to be off to a lightning-fast start.