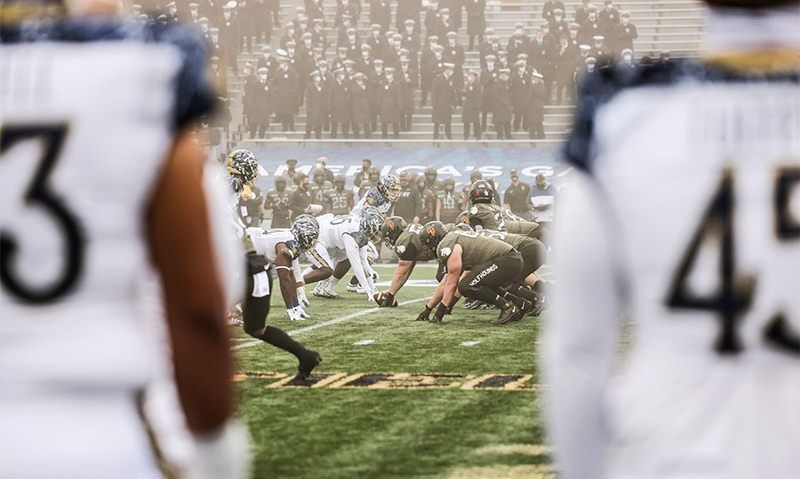 At least for one day at West Point, the word “victory” was spelled d-e-f-e-n-s-e.

On Saturday in the 121st Army-Navy football game, the Black Knights (8-2) at the U.S. Military Academy held their opponents from Annapolis to zero points, just four offensive first downs and a measly 117 total yards of offense as they won “America’s Game” for the fourth time in five years. The 15-0 win was the first Army shutout victory against Navy (3-7) in 51 years.

The Army-Navy game is normally played at a neutral site, but this year was staged at West Point’s Michie Stadium for the first time since 1943 because it is located on an active military base, which made it exempt from attendance limits placed on civilian stadiums and enabled all students from both service academies to attend the game.

A constant fog made it challenging to see across the field or to the opposite end zone. More significantly, the mist made the ball slippery and reduced passing to almost nothing.

“This was just a great game,” said Army head coach Jeff Monken. “I’m just so proud of our players. They fought and battled. Navy just fought their hearts out. We had our backs to the wall down here – we had the big stop. What a huge turning point in the game. I can’t say enough for (defensive coordinator) Nate Woody, our defensive staff and our defensive players. It’s a pretty big event to shut somebody out in this game. This has got such a great history to it. There’s people watching all around the country and all around the world that have played in this game and nobody really understands the emotion of this game unless you’ve been a competitor. That’s what this game is about – these warriors who are going to go and serve our nation. I’m just so proud of all these guys on both teams who played this game.”

Army’s sophomore quarterback Tyhier Tyler led the way with 98 rushing yards, including the game’s only touchdown, and completed his only passing attempt for 28 yards to Tyrell Robinson. Still, it was the defense led by tri-captain senior Jon Rattigan that dominated the game.

Rattigan’s story is remarkable. The 6-foot-1, 245-pound linebacker joined the team as a freshman but saw little playing time during his first three seasons at West Point as Cole Christianson – now a member of the NFL’s Los Angeles Chargers – was one of the defensive leaders of the Black Knights. Rattigan did not even play in his first two seasons and only made it into four games last year, recording just five tackles. Rattigan says he learned “toughness and perseverance” in those three years of hard work in practice with minimal opportunity to play the game he loves.

This year, with Christiansen graduated, Rattigan has led Army with 67 tackles (21 solo), 2 interceptions and a fumble recovery entering Saturday’s game. He is a finalist for the Chuck Bednarik Award for the nation’s best collegiate defensive player.

On Saturday, Rattigan showed the nation that his skills can be game changing. With Army ahead 3-0 on Quinn Maretzki’s 37-yard field goal, Navy was on the verge of taking the lead during the first possession of the second half. Starting on the Navy 35-yard line, Xavier Arline, the freshman quarterback for Navy who led all players with 109 yards rushing on 17 carries, charged forward for 11 yards on the first play from scrimmage. On the next snap, Arline sprinted through a hole on the right, evaded the secondary defenders and then curled left toward the scoring pylon at the front corner of the end zone. Army junior Cedric Cunningham made an. acrobatic diving tackle to trip up Arline on the Army 2-yard line.

With four downs to get just two yards, it seemed a mere formality that Navy would get seven points and take the lead. Rattigan and the rest of the Army defense refused to accept that possibility. On the first snap, Navy’s senior fullback Nelson Smith charged forward but was decisively stopped after a gain of one yard by Army senior nose tackle Nick Stokes and senior defensive end Amadeo West. Arline made a pitch to Nelson on the next play; this time he was knocked back a yard by Rattigan and junior linebacker Arik Smith. On third down, Arline tried a quarterback keep and found a big hole, but Rattigan charged into the gap and stopped him one yard from the goal line.

On fourth-and-one from the 1-yard line, Arline handed the ball to Nelson again and the Navy offensive line tried to plow forward but the cadets finished the goal-line stand – one that will be likely pass into legend at West Point and stick as a sore point at Annapolis for years.

The remainder of the scoring all occurred in the fourth quarter. Rattigan was again at the center of things. After an Army punt to the Navy 15, Arline tried a pitch to senior slotback C.J. Williams, but Army’s Cunningham was perfectly placed to obscure William’s view. The ball glanced off Williams’ hands and fell to the turf in front of Rattigan, who made his second fumble recovery of the year on the Navy 13. Five rushes later, Army’s Tyler found a gap and sped into the end zone.

Just over five minutes later, Navy started another drive deep in its own territory. In a second-and-10 situation, Arline tried a reverse handoff to sophomore wide receiver Mark Walker, but Army defensive back Daryan McDonald caught Walker for a safety. Later, a 40-yard field goal from Maretzki closed the scoring.

President Trump and the Secretaries of the Army and Navy attended the game, which officially had an attendance of 12,722 people.

Navy’s season is now over. Army has two games remaining. Next Saturday, Michie Stadium will be the site of the final Commander-In-Chief’s Trophy game in 2020 as the Black Knights host the Falcons of Air Force. The winner of that game will win the CIC trophy. Army finishes the season by traveling to Shreveport, La. for the Independence Bowl on Dec. 26 against a yet-to-be-named Pac-12 opponent.