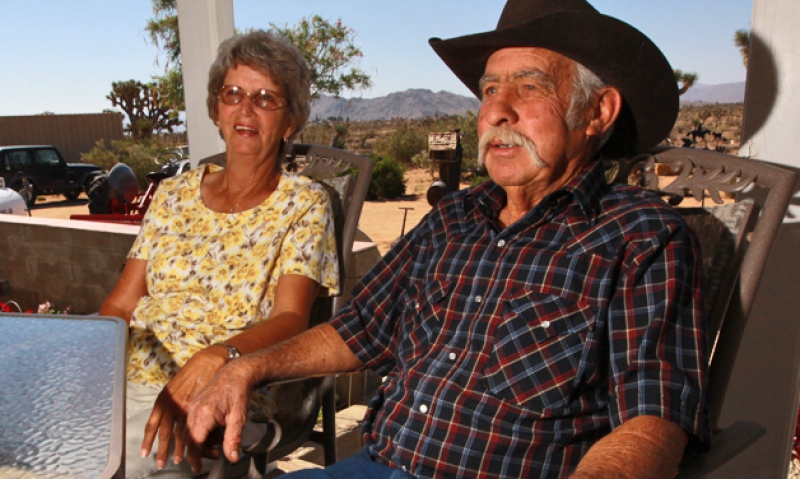 Wanda and Henry Sandoz, who have looked over the Mojave Desert cross for nearly three decades, will get to watch the cross go back up on Veterans Day. (Photo by Sandy Huffaker Jr.)

Henry and Wanda Sandoz both will be wearing big smiles on Veterans Day. Expect to see a look of relief on each of them, too.

The husband and wife and residents of Yucca Valley, Calif., made a promise to a friend nearly 30 years ago to look after a cross honoring U.S. veterans located on Sunrise Rock in the Mojave National Preserve. A legal battle to remove the cross went all the way to the Supreme Court – causing the cross to be encased in a box in the process. The original cross was stolen, as was a replacement one. But on Sunday, thanks to an approved land swap that will place the property the cross was located on into private hands, a new 7-foot metal cross once again be erected on Sunrise Rock.

"We weren’t sure if we’d live to see this day," Wanda said. "Henry (73 years old) hasn’t been in the best of health in the past eight, nine years. But it’s finally going to take place. The cross is going to go back up, and Henry is going to help put it up."

Litigation surrounding the Mojave Desert Veterans Memorial has been ongoing since March 2001, when a lawsuit was filed in the U.S. District Court for the Central District of California, arguing that the display of a cross in the memorial violated the Establishment Clause of the U.S. Constitution.

Liberty Institute, a nonprofit organization that works to educate, advocate and, when necessary, litigate for freedoms guaranteed by the Constitution such as freedom of speech and religion, came to the defense of the cross. So did veteran service organizations such as The American Legion, which has filed various amicus (friend-of-the-court) briefs in support of keeping the cross up.

Shortly after the ruling, the original cross disappeared. A replacement cross also was removed and recently found. But in April of this year, a land swap was approved in which the Sandozes gave five acres of land to the Mojave Preserve in exchange for the one acre where the cross once sat. That exchanged was approved Nov. 2, paving the way for the cross to go back up.

"For years, The American Legion has supported keeping this symbol honoring our nation’s veterans atop Sunrise Rock," American Legion National Commander James E. Koutz said. "The cross was used to honor and remember our World War I veterans, and memorials such as this one are one way of preserving those memories. We are pleased that a deal was reached that will allow this cross to once again carry out that mission."

Wanda said the cross will be erected at 11 a.m. on Veterans Day, and a ceremony will follow at 1 p.m. "I really can’t put into words what this means to us," she said. "It’s been going on so long, and so many times we thought this was never going to happen. I guess I should have had more faith."