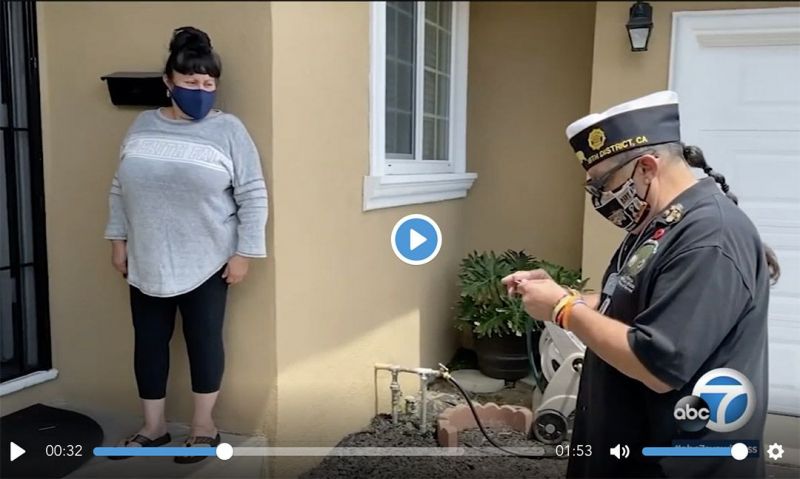 American Legion Post 10 in South El Monte, Calif., is less than a year old. It doesn’t have a facility. But neither of those two facts have kept the post from making an impact on its community during one of the nation’s most difficult times in history.

Post 10 members recently distributed at least $700 in gift cards to area residents who have lost their jobs, been unable to work or have had their hours cut during the coronavirus pandemic. The Legionnaires went door to door, practicing proper social distancing in the process, to deliver the $100 gift cards for Superior Grocers, a grocery chain with a location in South El Monte.

Post 10 Commander JR Duarte is a past commander from Borinquen Post 508 in Baldwin Park, Calif., and helped start Post 10 with a few other former Post 508 members. He said the post had been able to raise some money and was looking for a way to put it “to a good use.”

Duarte reached out to South El Monte Mayor Gloria Olmos, who – along with a local church and through word of mouth – identified families in need in the area.

It’s made a difference. "We're making it, but this will help a whole lot," South El Monte resident Lorie Beserra told ABC 7.

For Duarte, helping the community during this time was an easy decision. “It’s the reason why we became Legionnaires, I believe,” he told The American Legion. “It sounds cliché, but I really believe in making America better. It’s one of the reasons why we joined the service to begin with. It’s our duty. That’s basically what it comes down to.”

The following are just a few more examples of American Legion Family members stepping up to assist others during the coronavirus. Please remember to share what your post is doing at this time at www.legiontown.org.

When the coronavirus hit the nation, members of American Legion Post 48 in Guilford, realized that they were limited as to how they could help others in person. That led to the post establishing its Pay Forward Fund, which started with contributions from members receiving Coronavirus Aid, Relief, and Economic Security Act stimulus payments.

Donations have continued to come in, and Post 48’s fund now has reached $4,500. The plan is to donate it to Guilford organizations on the front lines of pandemic fight. “The [veterans] I talked to were certainly...relieved to be given an opportunity to help,” Post 48 Finance Officer Fred Brisbois told Zip 06, adding that the plan is to keep the fund ongoing as it assists organizations like the Guilford Food Bank, the Guilford Foundation and Guilford Interfaith Volunteers.

“Your thought process is just, ‘What else can we do?’” Brisbois said. “Keep the fund open.”

American Legion Auxiliary Unit 28 in Millsboro has teamed up with the community-based Local Ladies of Long Neck to hit an impressive milestone. In 10 weeks, the two groups have distributed 5,000 brown-bag lunches to anyone who needs them. The lunches were prepared at Post 28 by Unit 28 members June Jones, Robin Burns, Beth McGinn and Linda Shelly and taken to Grotto Pizza by Local Ladies of Long Neck members and helpers to be distributed.

The lunches have included various sandwiches and subs and are handed out five days a week. Any leftover lunches are given to the Boys & Girls Club in Oak Orchard.

Since Grotto Pizza has reopened, the lunches now will be distributed at Post 28. Unit 28 will now work with the AmVets Post 2 Ladies Auxiliary that will run weekdays through June 26. One hundred bag lunches will be available daily, along with bags of groceries.

Under normal conditions, members of the Severna Park Post 175 American Legion Family head to FutureCare, a short-stay rehabilitation center in Arnold, each month to pay bingo with the residents. The coronavirus put a halt to that.

But the Legion Family at Post 175 still wanted to do something to remind the residents someone was thinking about them, so they prepared and then delivered 38 care packages with toiletries and snacks to FutureCare.

Post 175 didn’t stop there, instead putting together nine more care packages to deliver to the crews of the USS Theodore Roosevelt and the USS. Nimitz. Another care package was sent to the husband of an Auxiliary member in Afghanistan as a contractor.

Family members were not allowed to see off members of the Minnesota National Guard leaving Mankato for a one-year deployment. So American Legion Riders from Chapter 37 in St. Peter showed up to provide the Guardsmen with an escort from Mankato to Hutchinson, Minn.

“They are not allowed to have family see them off, so we wanted to show them off in a proud manner as they head to Camp Ripley on June 1," Chapter 37 ALR Director Dave Street told SouthernMinn.com.

Chapter 37 also presented the Guardsmen with American Legion Riders coins and stood in a line as the troops boarded their bus.

American Legion Post 120 is teaming up with the city of Lambertville, Rolling Harvest Food Rescue, Zone 7 and the North East American Dairy Association for an Emergency Free Farm Market on June 6 at Post 120. Boxes of fresh fruits, vegetables and dairy products will be available to anyone temporarily struggling to take care of their family’s needs. Social distancing and safety procedures will be practiced by everyone participating in the event, and contactless trunk pickup will be available.

Members of Post 585’s American Legion Family in Duryea conducted a fundraising dinner to provide financial assistance for its veterans programs and to feed families in need in the area. More than 100 dinners were sold, with the remaining dinners being given to the Duryea Police Department.

“It's a sense of, not only a sense of accomplishment, it's a prideful thing that we're able to get out there,” American Legion Auxiliary Unit President Dorothy Collins told WNEP. “Whoever is in need, whatever we can do to help, that's what we're here for.”

The Department of Rhode Island donated $1,000 to the Emanuel Lutheran Church food pantry via the department’s Children and Youth Committee. It is money that will be well-used.

“I can honestly say that at this time, there’s no reason for anyone in West Warwick to go hungry,” food pantry chairman Myron Gadoury told The Kent County Daily Times. “There’s enough food, and we can help.”

The check was presented at American Legion Post 2 in West Warwick. “During this COVID crisis, a lot of people don’t have food,” Post 2 Finance Officer Bob Schierschmidt said. “We thought if we could give a monetary donation that’s going to help people in West Warwick and Coventry, that was a really good deal.”

In Colchester, members of Post 91’s American Legion Family recently conducted a food drive for those struggling during the pandemic. Donations went to stock the Colchester Food Shelf.