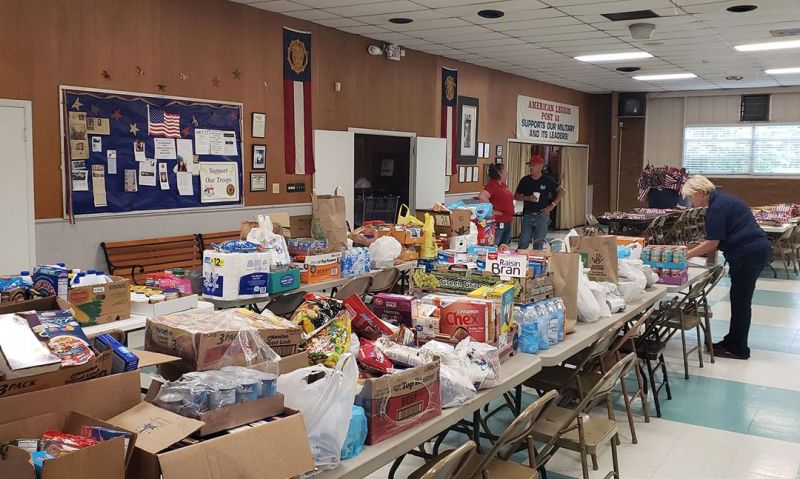 For years, Henry K. Burtner Post 53 in Greensboro, N.C., has provided non-perishable food for residents of The Servant Center through financial contributions and donations made during the post’s weekly bingo night.

But the coronavirus brought a halt to bingo, which meant a halt in donations. For The Servant Center, the pandemic meant a reduction in donations and funding by almost half.

That didn’t sit well with Past Department of North Carolina Commander and current Post 53 Second Vice Commander Carol Barker, who says assisting The Servant Center is a passion. After conferring with fellow post leadership, she helped organize a May 29 food drive that produced two truckloads of food and supplies for the residents of the center, which works to transition homeless and disabled veterans to becoming independent, contributing members of the community through housing, health care and restorative services.

“We set it up … and we did it. We got a lot of food,” Barker said. “I was hoping for half of what we got. We got (donations from) churches (and) people I’ve never seen before. It was surprising. But there are people out there who do care.”

The post hosted the food drive and set it up so people could drive through to drop items off while observing proper social distancing. The effort brought in an estimated 1,000 pounds of food, cleaning supplies and personal hygiene items. Contributors also donated $140 that went to The Servant Center as well.

“This partnership between the post and The Servant Center is a win-win for both organizations as well as engaging the local community,” Jim Zajc said via Legiontown.org. “The post plans to host future food drives on a quarterly basis. The food drive allowed the post to not only help veterans, but to reach out to the community and show them what The American Legion is and does in times of crisis.”

The Servant Center thanked Post 53 via Facebook, posting “During this ongoing time of crisis, we love knowing that our agency continues to stay in the hearts and minds of our community members. We would not be able to serve our daily mission without you all!”

“We told (the center) to let us know when they needed us to do it again,” said Barker, who praised newly elected Post 53 Commander Robert Hickey and other Legion Family leadership for their support with the project. “Community is part of the healing of veterans. There are so many of them who are suffering. I was very excited about how well this went.”

D-Day Remembered. The coronavirus may have stopped or altered many of the D-Day commemorations in the United States and Europe, but American Legion posts made sure the date was remembered.

In Sylvester, Ga., American Legion Post 335 conducted a ceremony that including ringing the bell 46 times to honor those from Georgia who lost their lives during D-Day. The post also honored D-Day survivor Jim Tilton, who received a Purple Heart during the invasion and recently turned 96.

Post 335 member Paul Murray told WALB News 10 that while the ceremony did not have a large turnout, he said it was important for them to take the time to honor and remember those that stormed the beaches of Normandy, France, 76 years ago.

In Michigan, Niles American Legion Post 26 spent June 6 visiting some of its World War II veterans. They presented each of them with a certificate of honor and Michigan challenge coin.

And in San Diego, American Legion Riders provided an escort for World War II veteran Tom Rice, who served in the 101st Airborne during D-Day and was recognized by volunteers with Freedom Rings Global and Honor Flight San Diego to commemorate D-Day’s 76th anniversary.

Corri Sager put out a call on the I Live in Pueblo West Facebook page asking local residents to help honor her husband’s retirement from the U.S. Army. Members of American Legion Post 2 in Pueblo were among those who answered the call, providing Maj. Theodore Sager with a parade to honor his 24 years of military service.

“In all there were about 70 vehicles and 20 motorcycles – both the VFW Warriors and American Legion Riders Post 2 were involved,” Post 2 Adjutant Jay O’Neil told the La Junta Tribune-Democrat. “There were also a number of horses from the Pueblo West Horsemen’s Association.

“The (official retirement) ceremony was canceled at Ft. Carson and the many family and friends planning a party could not come. Corri’s plea was to have those who could drive by their home to ‘congratulate him on his retirement’ May 20. The Pueblo West Community showed how special they are supporting the military.”

When Sons of The American Legion Squadron 148 in Riverview learned via Facebook that Liberty Manor for Veterans needed some new equipment, the Sons responded.

Liberty Manor for Veterans provides transitional housing for disabled and honorably discharged veterans who have fallen victim to homelessness. The facility was in need of a new vacuum cleaner and grill, and its residents had no transportation or funds to purchase a new one. So SAL Squadron 148 stepped up, purchasing both a new vacuum and new grill, along with grill utensils. SAL members Mark Getty and Carroll Weese did the shopping and delivered the items. The facility’s residents used the grill that night to cook a chicken dinner.

• The American Legion Family from Post 119 in Linden has been delivering trays of orange snacks for health-care staff at Ascension Genesys, McLaren and Hurley hospitals.

• Realizing that the coronavirus is going to put a damper on some Fourth of July activities, the Harvey C. Noone Post 954 American Legion Family in Churchville decided to give the community another way to celebrate July 4. The post’s Legion Family is sponsoring a 4th of July Decorating Contest that will include four divisions: Business, Resident, Youth Patriot (ages 7-16) and Little Patriot (2-6 years); and four categories: Lawn Display, Porch/Front Door Display, Window and Best Use of Poppy Display.

• In Wayland, the annual Sgt. Devin A. Snyder Memorial Foundation Ride to Remember – which brings in hundreds of people a year to honor the memory of a local war hero killed in action in Afghanistan in 2011 – had to be canceled. So American Legion Post 402 teamed up with the foundation, along with the Steuben County Sheriff’s Department, Paul and John Paul Holubek, Dollars and Cents, Kings Market and New York Chips to turn this year into an opportunity to honor Bath VA Hospital frontline workers. The group provided a meal for the VA workers. “We wanted to figure out how to still honor her on this day,” Post 402 Commander Kevin Mark told the Genesee County Express. “We have a few WWII veterans left in the Wayland area, so it is nice to include this on D-Day. It is a nice way to honor frontline workers and veterans on the 76-year anniversary of D-Day.”

Dozens of graduating seniors in the Houston area were a part of the “Adopt-A-Senior” initiative. The seniors were given gifts and congratulations by individuals or businesses that decided to “adopt” them based on student biographies that were shared by their families in a Facebook group.

American Legion Post 560 in Garden Oaks and Hartz Krispy Chicken Buffet, owned by Post 560 3rd Vice Commander Naro Mak, teamed up to adopt three students. One of the students is enlisting in the military and was provided with food and gift cards, a towel, water bottle, flash drives, a notebook and pens.