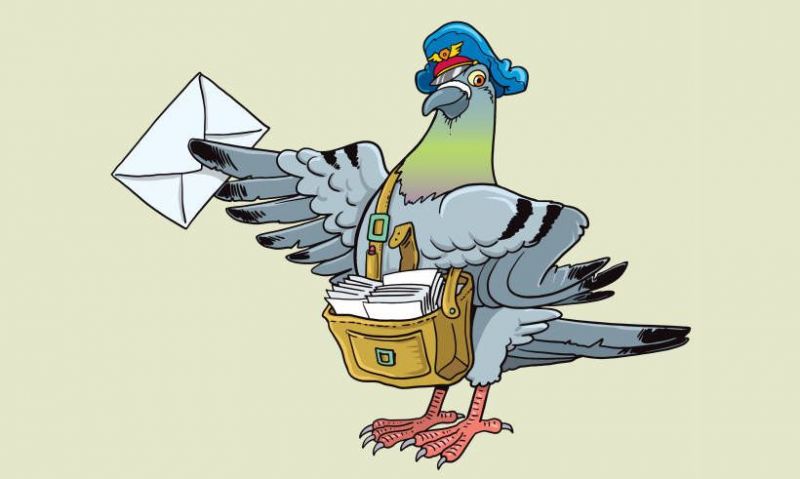 When he took over as commander of Garden Oaks American Legion Post 560 in Houston, one of Will Spencer Jr.’s goals was to improve communication among the members. It’s not an easy task to complete in the midst of a pandemic, but Spencer found a way: changing what had previously been a monthly post calendar to a monthly newsletter.

But that idea has since morphed into something bigger: an opportunity to connect with the community and possibly grow the post’s American Legion Family membership. The post chose to use a military carrier pigeon as the mascot for the newsletter and have asked the public to come up with a name and origin story for the pigeon in 500 words or less.

Spencer, who served as Post 560’s adjutant before being elected commander, said he hoped the contest would provide a positive distraction for both post members and the community during the coronavirus, as well as a way to let the community know that “even though the (lounge) in the post is shut down, the post itself is not. We wanted to keep them engaged.”

Spencer said the coronavirus brought about the change from a calendar to a newsletter. “Given the COVID pandemic and how it has changed the way we do business, we got together (wondered) how can we be more effective reaching out within the community and to our members,” he said. “We wanted to have better communication, and we wanted to get them engaged.”

Turning to a creative writing contest was a way to bring the public into that effort “and get people energized again,” Spencer said. “Auxiliary Unit 560 Historian Catherine Mondy-Boyce, whose mother Peggy Mondy is a Marine Corps veteran and serves on the post’s executive committee, came across the carrier pigeon drawing online while searching for a mascot for the newsletter.

“She was really inspired by it,” Spencer said. “She went as far as to contact the owner of the (drawing) and was able to buy the copyright from the guy. So now we can utilize this pigeon any way that we choose to.”

The contest is open to high school students and adults, and the post has arranged for the winning entry to appear in The Leader, a community newspaper that covers northwest Houston. The Leader also has helped promote the contest, growing what already was a strong relationship between the post and the media outlet.

The winner also will have his or her picture in The Leader and will receive a small cash prize. The deadline to submit entries in Sept. 1.

Each person submitting an entry receives a phone call from Post 560 First Vice Commander T. Scott Villarreal-Dowlearn, who shares information about what Post 560’s Legion Family does in the community.

“We try to form a friendship or a partnership,” Spencer said. “The goal is not to push our agenda on people. We just want to give them the information and say ‘hey, if you choose to come out to one of our meetings and see what we’re about … we have plenty of room for you.'

“Hopefully if they come out and they like what they see, they can join our post, and then they can share it with their friends and their families.”

The following are more examples of American Legion Family members assisting others, reaching out to their communities and providing honors during the coronavirus pandemic.

After Neptune Society collected hundreds of cleaning wipes and other care products (masks, lens wipes, sanitizer, refillable bottles), they were made available to area veterans and their families at American Legion Post 117 in Newington.

• American Legion Post 347 in Lady Lake has scheduled a food drive to replenish area food pantries for Aug. 9. The effort is aimed at assisting out-of-work families and will be conducted via a drive-thru, socially distanced donation procedure.

• In Homestead, American Legion Post 43’s parking lot served as the backdrop for a socially distanced birthday celebration for Pearl Harbor survivor and U.S. Navy veteran John E. Hatcher. More than 100 people showed up to yell birthday wishes to Hatcher, including members of Post 43, and first responders from the Homestead and Florida City police departments and Miami-Dade Fire Rescue.

The Sycamore American Legion Riders Chapter 99, Genoa American Legion Riders Chapter 337 and others staged a motorcycle/motorcade parade of vehicles parade to travel to eight different senior living facilities in DeKalb and Sycamore. Vehicles were decorated with American flags and other patriotic items, and parade participants honked their horns as they drove around each facility.

A POW/MIA ceremony followed the motorcade at the Genoa Veterans Home as part of the 13th annual Veterans Weekend.

Because stores stopped taking redeemable bottles and cans during the pandemic, SSG Michael A. Dickinson II American Legion Post 257 in Battle Creek began collecting the cans from area residents so that they would not accumulate in their basements, garages and other storage areas.

Post 257 turned the effort into a fundraiser that resulted in a filled storage building and two rented semi-trailers. By the end of June, the post had collected around 175,000 cans and bottles.

"We envisioned something like this but not two semi-trailers," Post 257 Commander Brian Mohlman told the Battle Creek Enquirer.

Peter Mura was supposed to attend New York Boys State this summer as a representative from Malverne American Legion Post 44. But with the program canceled and spare time on his hands – and with some help from the American Legion Family – Mura came up with a service project to support members of the U.S. military.

Mura chose to provide support to an Army medical unit from Massachusetts that was stationed at the Javits Center in Manhattan to help COVID-19 patients; Mura’s uncle was a nurse in the unit. The unit was stationed at Javits in April and May, so Mura put together goody bags and handed them out every Sunday morning. He delivered potted flowers to mothers in the unit on Mother’s Day. Members of American Legion Riders Chapter 44, American Legion Auxiliary Unit 1033 in Elmont and Girl Scout Troop 2033 in Valley Stream helped him put together the goody bags.

American Legion Auxiliary Unit 44 also assisted Mura with his project, purchasing cards and sharing their own handmade cards from the Auxiliary juniors and the Sons of The American Legion Squadron 44. Each card Mura delivered contained a Life Savers candy, attached to the message “Thank you for being a great New York Life Saver.”

• In Newton Falls, American Legion Post 236 and St. Nicholas Church Good Samaritan Outreach teamed up for a backpack giveaway for children returning to schools. Because of the pandemic, the giveaway was set up as a drive-thru, safely providing the children with a backpack filled with school supplies. More than 50 children were helped, with the remaining backpacks given to Holy Trinity Academy & Preschool in Warren.

• When Brown County Veterans Service Office Commissioner Jane Griffin made a request for assistance in stocking the Veterans Food Pantry in Ripley, American Legion Post 367’s American Legion Family responded. An effort that included the post’s Legion Family and the Ripley-Lieutenant Byrd Daughters of the American Revolution chapter resulted in more than 2,500 pounds of food being collected. The pantry typically assists between four to 15 veterans a day.

• In Perrysburg, the local Way Library had to close because of the coronavirus. Program Director Lisa Richard came up with the idea to hang U.S. flags outside of the library to rally the community. She contacted American Legion Post 28 to find out the proper way to hang the flags; Post 28 ended up donating all the flags for the display.

American Legion Post 2 in Caguas helped in the distribution of a 53-foot long trailer full of supplies, first for local veterans and then for others in the community.

Floyd Miner’s 90th birthday was one to remember for the Korean War veteran. Members of the community – including American Legion Post 91, where Miner is a 58-year member – came together outside of Miner’s home to honor him.

Members of Post 91 presented Miner with a gift package that included an American flag blanket and a certificate honoring him for his decades of engagement.

“When you put that amount of time into an organization like The American Legion, you know you’re dedicated to what you believe in, and Floyd is one of them,” Post 91 First Vice Commander Dick Studley told My Champlain Valley.

• American Legion Post 333 and Auxiliary Unit 333 in Sun Prairie had to cancel an April 14 blood drive due to the coronavirus, but the Legion Family members made up for it July 14 with an effort that collected 68 units of blood – well over the goal of 50. The 72 donors were the most the Post 333 Legion Family had gotten to volunteer since 2012; Legion Family members took donor temperatures, registered them, kept donors hydrated, escorted them to the refreshment area, and made sure donors collected snacks and beverages before leaving. A similar effort is planned for Sept. 8.