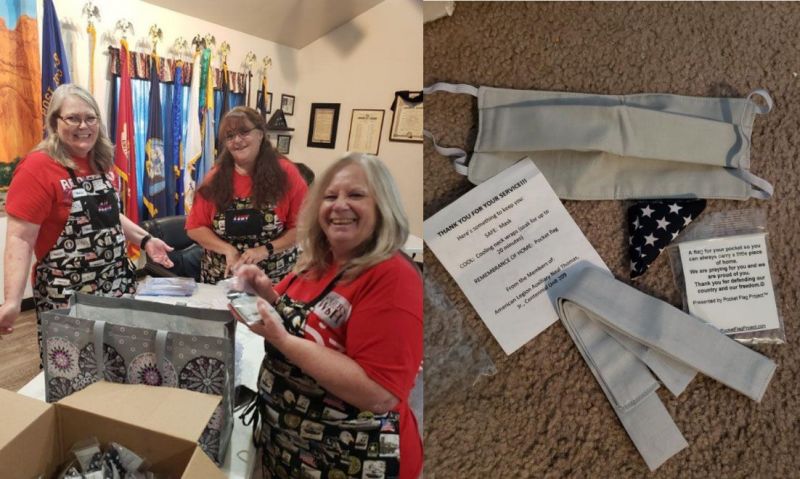 Since the start of the coronavirus pandemic, American Legion Family members have shown time and time again the resolve to continue their mission of service to community. Stocking food pantries, delivering meals, providing face masks and other personal protective equipment, and delivering financial assistance are just some of the ways the Legion Family has helped support others during perhaps the most difficult time in the United States in more than 100 years.

For first-term Post 209 Commander Joe Schmidt, letting the coronavirus get in the way of carrying out the American Legion Family’s mission wasn’t an option.

“Being in Colorado Springs, we have one of the largest military presences (in) the country,” said the 31-year-old Schmidt, who served in the U.S. Army from 2008 to 2016, deploying to Afghanistan before being medically separated. “We know when the call comes from the servicemembers … they’re going to need assistance. And we can’t stop what we’re doing because the rest of the world has stopped. We take pride in what we do as a post, the largest post in the state of Colorado, that we make it our sole purpose to serve the veterans and the active-duty servicemembers of our community.”

In April, the post learned that a U.S. Army unit stationed at Fort Carson was struggling to fill its mandatory face mask order. The Legion Family donated several hundred dollars and searched the area to help the soldiers get the masks they needed.

More recently, a U.S. Army aviation unit deployed to Honduras and under the command of Lt. Col. Adam Bock – himself a member of Post 209 and the son of fellow Post 209 Legionnaire and Past National Commander Tom Bock – reached out to the post asking for a show of support for the soldiers in the unit.

Members of Auxiliary Unit 209 responded, forming a committee to identify what items could be sent to the soldiers that were both practical and a reminder of their service to the United States. Auxiliary members Kellie Hayes and Royce Hopper made 250 masks and cooling neck wraps and placed them in individual bags that also included a pocket flag and a note in each bag thanking each soldier for their sacrifice and service.

Members of Unit 209 also made and shipped 125 masks to the health clinic at Naval Air Station Pax River in Maryland, where Hayes’ daughter and Post 209/Unit 209 member Lt. Chelsea Thompson is stationed. And when one of Post 209’s members serving as a caregiver for his wife while she is receiving in-home hospice care broke his vertebra during a fall, a schedule was created for members of Post 209’s Legion Family to take turns preparing and delivering meals to the husband and his wife.

Past Unit 209 President Jackie Bowen said where a need exists, the American Legion Family is going to try to fill it, no matter the surrounding circumstances. “I just think it’s real important to take care of our veterans and military and families. It’s something I feel I should be doing,” she said. “The military can’t take time off if something like the pandemic happens. They still have to continue and do their service. So why should we stop when we can continue?”

“We come together and work together as one team. It’s one team and one fight. It doesn’t matter what we’re doing, from a Friday night dinner to supporting the community to a community event. We’re doing it as one. It’s a family event.”

The efforts from Post 209 are among others happening across the nation involving American Legion Family members.

In Leesburg, 95-year-old John Bellefontaine – the last survivor of the U.S. Army's 551st Parachute Infantry Battalion – was honored by community members after his trip to visit battlefields in Belgium was canceled because of the coronavirus.

More than 100 cars, SUVs and motorcycles took part in a parade that passed by Bellefontaine’s home to honor the veteran. Among those were American Legion Riders from Chapter 55 in Clermont.

"He deserves every bit of this," Chapter 55 Legion Rider Rich Greenwaldt told the Philomath Express. Greenwaldt and his fellow Legion Riders gave Bellefontaine an ALR coin before standing at attention and saluting.

In Baltimore, members of the Federal Post 19 American Legion Family collected masks and funds for masks to assist homeless veterans through the Maryland Center for Veteran Education and Training.

Marine Corps veteran Alice Witkowski celebrated her 103rd birthday with a socially distanced small party at the Good Shepherd Home in Watford City. Jerry Samuelson and Mark Honstein, members of Carl E. Rogen American Legion Post 29, were on hand to present Witkowski with certificates: one from Gov. Doug Burgum and another from the commissioner of the North Dakota Department of Veterans Affairs.