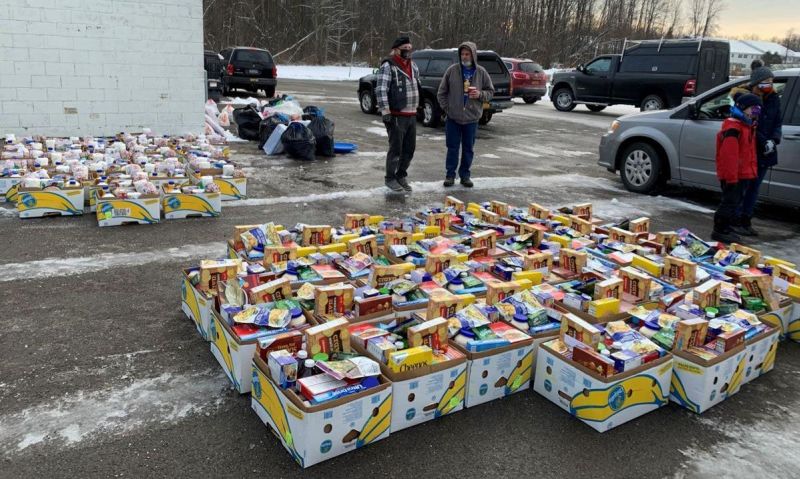 Since the coronavirus pandemic hit the United States last winter, American Legion Family members across the nation have followed the organization’s mantra “for community, state and nation” by stepping up during a time of crisis.

Those Legion Family members have been sources of inspiration in one of the darkest times in the nation’s history, leading food collection and distribution efforts, assembling and providing PPE to front-line workers, providing financial support to others and continuing The American Legion’s role in honoring the country's military and its veterans. We attempted to chronicle as many of those as possible on www.legion.org.

As 2020 wound down and the country entered 2021, those efforts continued. Over the holiday season, American Legion Family members helped provide much-needed food to families impacted by the pandemic, delivered financial assistance to other organizations and honored fellow veterans.

Posts also continue to adapt their daily business and programs, using Zoom, Microsoft Teams and other technology to meet while observing the proper safety protocols. And in Connecticut, one post was able to make its officers' installation a family affair.

For more than 10 years, Harry J. Ruffin Post 206 in Middletown has met at Connecticut Valley Hospital, but when the pandemic hit, admittance to the hospital was closed to outside groups. Post 206 continued to meet and conduct business via Zoom, but had postponed its officer installation until this winter.

Post 206 Commander David Roane was set to be sworn in for his fifth year as Post 206 commander and had promised the post all of its officers would be installed by the end of 2020.

Meanwhile, more than 1,500 miles away, David’s cousin Donald had been elected Department of Oklahoma commander in July. David reached out to Donald by phone to both congratulate him and make a request.

“I congratulated him, and I said, ‘Look, I need a big, big favor,’” said David, who also serves as Connecticut’s District 7 senior vice commander. “I said, ‘We haven’t done our installation yet. I don’t know if it can be done … but I would like for you to install my officers. Since we can do it by Zoom, you don’t have to leave Oklahoma, (and) we don’t have to leave Connecticut.’”

In the meantime, David reached out to Department of Connecticut leadership to ensure being installed by a member of another department wasn’t against any American Legion rules. Leadership fully supported the idea, and the installation of Post 206’s officers took place via Zoom on Dec. 18 – with Donald swearing them in.

Being sworn in by a relative who is a dedicated Legionnaire made the event extra special to David. “It was overwhelming to me,” he said. “I told my wife that the next thing to getting married, this has been the next highlight of my life.”

Donald said swearing in his cousin was “extremely cool”; both he and David agreed conducting the installation the way they did is another example of how Legionnaires have displayed the ability to adapt and overcome during the pandemic.

“I definitely believe that it is,” David said. “And another thing that has come out of this with my post is that we have a number of members … who live outside of the state of Connecticut. But because they joined when we organized (the post), they remain a member of our post. In February, I’ve already talked to (Post 206 Adjutant Mary Hamlin), and she is going to send out a letter to all of our members that live out of state and invite them to join us on our monthly meetings as long as they’re still going on Zoom. That way we’ll get to know what’s going on in their state, (and) they’ll get to know what’s going on in their state and their post.”

As we continue through 2021, we will continue to share the stories of American Legion Family members rising up during COVID-19. The following are a few of those examples.

Nearly 60 vehicles took part in the parade for Metcalf, a 46-year lifetime member of Post 208.

“There’s so few of our World War II veterans left and he’s a special guy,” Padovani told the Chicago Tribune. “All of us wanted to do something special. It’s all about his service to our nation at a time, back in World War II, that was really appreciated, and he is just the greatest guy.”

In Antigua, Guatemala, Master Sergeant Mario Enrique Gonzales Acker Post 2 has teamed with the National Police to provide more than 100 parcels of food to assist those who have struggled financially because of travel and work restrictions. The post continues to collect food to provide to those in need.

An altered version of the 32nd annual Community Christmas Dinner Dec. 25 in Park Rapids took place at American Legion Post 212. Rather than the usual sit-down dinner, meals were ordered in advance for either carryout or delivery. Around 400 meals were delivered, while more than 300 were picked up curbside.

Prior to Christmas, Post 212 also hosted more than 310 children for a drive-thru visit with Santa and Mrs. Claus.

Since the pandemic hit, American Legion Matawan Post 176 has taken part in food collections, raised funds for those in need and helped stage ceremonies in a safe and socially distanced way. Most recently, the post showed its support for the winter clothing drive hosted by the Woman's Club of Matawan, donating hundreds of dollars’ worth of clothing and other items to the effort, which benefits homeless veterans.

"Community-based organizations like Post 176 play a vital role in maintaining communal morale and cohesion,” Post 176 Adjutant Anthony Mapp told Patch.com. “However with the pandemic we could no longer do business as usual and had to adapt in order to keep our members and the community safe. Our focus will always be on staying safe while achieving the mission of the American Legion.”

• In Ballston Spa, The American Legion Department of New York presented two local nonprofits with $10,000 each to help each one continue to assist local veterans. The money was given to the Guardian House and the House, both of which are transitional housing programs that provide assistance with rent and utility payments, transportation and furnishings for living spaces. The Veterans and Community Housing Coalition, which oversees both, said assistance requests have tripled since March 2020 when the pandemic began to grow. "This is an organization of veterans helping veterans," Keith Koster, a member of Post 70 in Saratoga Springs, told The Saratogian. "A lot of us gave and sacrificed for our country. And now, we're going to continue giving back to our communities."

• In Williamson, American Legion Riders Chapter 394 provided 74 Christmas food boxes to more than three dozen households prior to Christmas Day. The Riders, with the support of other local organizations and American Legion Family members, collected 76 boxes and 74 bags of food for 38 area families.

• In Norwich, American Legion Riders Chapter 189 provided a new American flag and display light to the Hospice of Chenango County. The Riders held a flag-raising ceremony outside of the facility and saluted the residents there. They also collected trash and cleaned up the outside area of the facility.

In Marion, the Salvation Army continued to assist those in need through its annual Red Kettle campaign, providing toys, clothing and food boxes for more than 200 families and more than 700 children. But as with many nonprofits during the pandemic, fundraising has been harder than normal.

But the Salvation Army got a nice boost before the holidays when Harold L. Bradley Post 584 presented the local chapter of the organization with $5,000.