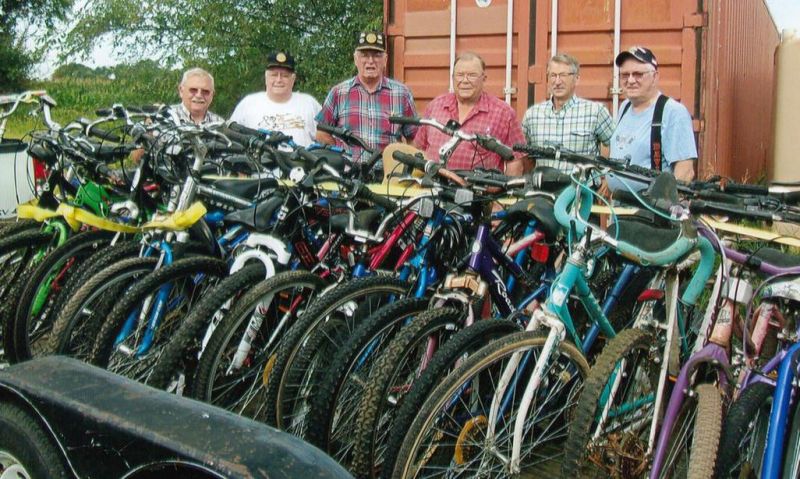 Since 2007, 40-year South Dakota Legionnaire Fran Johnson has headed up a program that provides restored bicycles to children on Indian reservations in South Dakota and Nebraska. During that time, around 2,100 bicycles had been distributed.

For the two-time commander of Post 12 in Yankton and South Dakota District 8’s Children and Youth chairman, the drive to continue to program hasn’t waned.

“It’s really rewarding, and I’m just happy to be able to keep doing it,” Johnson said. “The Legion’s (mission) is to help people, and that’s what I’m trying to do. Every kid needs a bike.”

In 2007, Johnson saw a pair of Legionnaires from American Legion Post 74 in Brookings, S.D., had started a bicycle program in their area and reached out to them about assisting their effort from Yankton. When the person in Brookings who repaired the bikes passed away, Johnson moved his efforts to bringing bicycles to area Indian reservations. He now provides bicycles to children on six reservations, one as far as 180 miles away.

Johnson gets bikes from various sources, including from local businesses and individuals. Some individuals donate with a condition: “They say ‘take it all or don’t take any,’” Johnson said. “There’s a certain amount of them that have bent frames, bent wheels – stuff that I can’t use.”

But Johnson hangs onto them, and then takes them in bulk to Mike Durfee State Prison in Springfield, S.D., where a program has inmates repairing bicycles and then giving them away.

“They, in turn, give me a bunch of (repaired) ones and I bring them back (to Yankton),” Johnson said. “It works out well for both of us. It’s really a good deal.”

Johnson’s effort also includes collecting used sporting goods and playground equipment that can be fixed up and provided to the children. “To see those kids grab those balls and go play baseball, it’s really heart-warming,” he said. “They get some exercise, and it keeps them occupied.”

Johnson isn’t surprised that so many people step up to donate items to his effort. “I’m out to help kids,” he said. “Everybody likes to help kids.”

Especially Johnson, who said the big pay-off are times like when he and other volunteers went to deliver bicycles to children in Lake Andes, S.D.

“We had two trailers … and one top of one of those trailers was a Big Wheel,” he said. “There’s this girl, she’s about 4 or 5. She saw (the Big Wheel), and she grabbed a hold of her dad’s hand, and she’s a pointing. She wanted that Big Wheel.

“So we unloaded it, got it on the ground, and she climbed on it and was going like crazy all over that parking lot. That’s what makes it all worthwhile.”