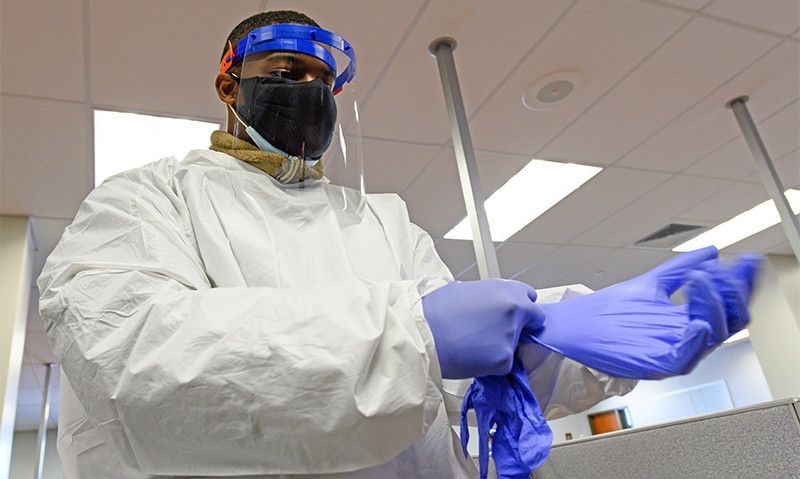 Thousands of additional National Guard soldiers and airmen are headed to hospitals, long-term care centers, testing and vaccination sites across the country this week as a record number of COVID-19 hospitalizations pummel the nation’s beleaguered health-care system.

They join more than 15,600 National Guard members already helping states with everything from COVID-19 testing to patient care, according to the National Guard Bureau. This includes more than 6,000 Guard who were providing direct support to hospitals and other health-care facilities as of Jan. 14.

“I wish we did not have to take this step, but the rise in hospitalizations – caused primarily by those who are not vaccinated – is stretching the capacity of our health-care system thin, jeopardizing care for Maine people, and putting increased strain on our already exhausted health-care workers,” Maine Gov. Janet Mills said in announcing the deployment. “The National Guard have been an invaluable asset during this public-health emergency, and with this new order, we are hopeful that our hospitals will be able to open more beds to provide for surge care.”

Maine’s hospitals welcomed the news. “We are stretched to our bed-capacity limits,” said Steven Michaud, president of the Maine Hospital Association. “All the while, more and more of our employees are out due to COVID exposures. The stress on our caregivers can’t be overstated. The additional help from the Guard couldn’t come at a better time.”

This appreciation for Guard members is being echoed across the country.

“They have really been a life saver,” said Connie Gregoire, who is part of the food and nutrition staff at Exeter Hospital in New Hampshire where 95 National Guard soldiers and airmen are performing food service and administrative work at 13 hospitals. “They came in and started doing a lot of the stuff we just don’t have the manpower to do.”

American Legion National Commander Paul E. Dillard lauded the National Guard, as well as the health-care workers who have been on the front lines of the pandemic for nearly two years. He also noted the assistance American Legion posts are providing around the country. “We continue to show our support by opening post homes as vaccination sites, donating blood and encouraging compliance with Centers for Disease Control recommendations,” Dillard said.

The pandemic represents the longest sustained domestic support operation in the Illinois National Guard’s history, and has placed record demands on the Guard in many other states, as well. More than 1,600 members of the Illinois Guard were activated March 13, 2020. They helped establish alternate-care facilities, coordinate medical supply shipments, set up and operate testing centers, track COVID-19 cases, distribute personal protective equipment, assist the Cook County Medical Examiner’s morgue and fly 250 isolation pods from Oregon to Chicago. In addition, the Illinois Guard administered 1.8 million doses of the COVID-19 vaccine between January and September 2021 as part of the 220,190 duty days in pandemic support it provided last year. This came in addition to overseas deployments, providing security in Washington, D.C., from January to May, helping with wildfires and floods in California and responding to several other requests for assistance.

The Minnesota National Guard has pitched in at 45 COVID-19 testing sites, helped administer vaccinations at a dozen other locations, distributed test kits and deployed nurses, medics and non-medical personnel to health-care facilities, among other efforts. Since November, more than 500 Minnesota Guard personnel have trained 500 as certified nursing assistants and temporary nursing aides in order to better assist short-staffed long-term care centers at the direction of Gov. Tim Walz, a National Guard veteran. Today, 100 of these Minnesota Guard troops are serving as critical support staff in these facilities. And about 30 facilities have received such help to date.

And that’s just a sample of the demands on the Minnesota Guard over the last two years. “Between 2020 and 2021, there were a total of 18 state active-duty missions with governor’s executive orders, with a total of 24,699 soldiers and airmen activated across the 18 missions,” said Army Col. Scott Rohweder, Minnesota National Guard’s director of operations. That includes Minnesota Guard’s support for COVID-19 missions, civil unrest, and combating wildfires.

For its part, the Maine National Guard’s first COVID-19 response involved providing tents and outdoor lighting for an external triage unit at the Togus VA Medical Center in Augusta. That was followed by fit-testing N95 masks for more than 4,200 staff at long-term care centers, helping the Maine CDC with case mapping, delivering personal protective equipment and vaccines around the state and supporting testing and vaccination sites.

The missions have involved families as well. Army National Guard Col. Michael Brice and his son, Dylan – a senior airman – both served at a mass vaccination center in Manhattan’s Jacob Javits Convention Center for several months last year. Today, the New York Guard’s COVID-19 work includes partnering with the state Department of Health to train soldiers and airmen as EMTs to help meet health-care demands, in addition to collecting more than 1.6 million samples at testing sites and assembling more than 14.5 million COVID-19 test kits as of the end of December, among other operations.

As many as 300 Massachusetts National Guard members were deployed just after Christmas to help some of the state’s largest hospitals. And approximately 450 Kentucky National Guard were activated last week to provide non-medical support to 43 hospitals, which will allow medical staff to focus on patient care, said Lt. Col Stephen D. Martin, director of public affairs for the Kentucky Guard.

Meanwhile, Oregon Health & Science University in Portland – the state’s largest hospital – expects 120 Guard members to arrive this month to help with everything from staffing visitor entrances to ambulatory services. “We are deeply grateful for the National Guard’s support during this time,” OSHU said in a message to employees.

It’s not clear whether Maryland or New Mexico National Guard will take on new school-related duties. But there’s no question the Guard will continue to be a critical part of the nation’s pandemic response.