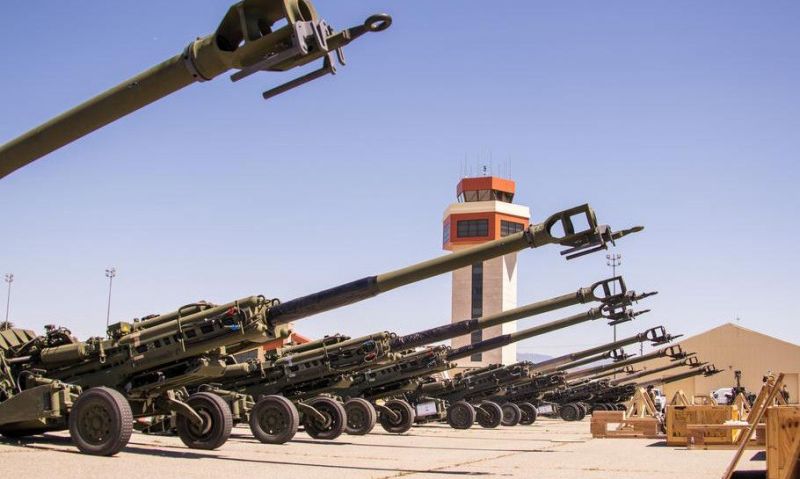 Ukrainian troops now have more than half of the 90 howitzers that the U.S. pledged them to help beat back a Russian attack in the country’s eastern region, chief Pentagon spokesman John Kirby said Wednesday.

While they are a different caliber than Ukraine’s Soviet-era 152mm Msta-B howitzers, they share the same “basic outlines,” a senior U.S. defense official said last week.

Still, Ukrainian troops require some training to use the weapons, which the U.S. is providing at an undisclosed location outside Ukraine, Kirby said. Ukrainian troops who complete the training are expected to train to other troops when they return to the fight.

“We finished up earlier this week the first tranche of more than 50 trainers that are going to go in and train their teammates,” Kirby said. “We're working on a second tranche of … more than 50 that [are] going to go through training in the same location outside Ukraine.”

The training has gone well so far, according to Ukraine Defense Minister Oleksii Reznikov, who said in a translated statement Wednesday that Ukrainian gunners working with a 155mm howitzer “hit the target with the first shot.”

The switch to the U.S. cannon has effects that spread beyond the battlefield as it better aligns Ukrainian forces with partners in the West, Reznikov said.

The minister said learning the western systems represents a step toward his goal to “integrate Ukraine into NATO de facto.”

“Gradually, this will ensure full compatibility of the Ukrainian army with the armies of NATO countries, which will become a significant reinforcement of the eastern flank of the alliance,” he said in the statement. “Three months ago, this task was considered almost impossible, but thanks to the courage and professionalism of Ukrainian soldiers … everything has changed.”

One of the reasons that Russian President Vladimir Putin threatened to invade Ukraine was to stop the country from seeking NATO membership, for which it applied in 2008. While NATO has not accepted Ukraine, it refused to close the door on future membership for Ukraine earlier this year despite Putin’s demands.