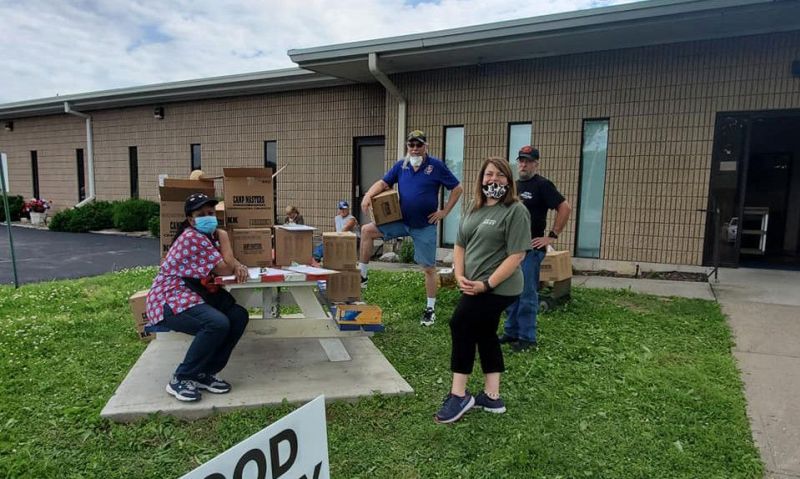 On February 29, 2020, Tirey J. Ford American Legion Post 21 in Independence, Mo., celebrated the grand opening of its food pantry dedicated to assisting active-duty military and veterans in the area.

A few weeks later, the nation, and much of the world, shut down. The coronavirus pandemic closed schools and businesses, limited social interactions and created a desperate situation for those either immune-compromised or suddenly out of work.

But at Post 21, the drive-thru food pantry continued. On the last Saturday of each month since its opening – with the exception of one month – the post’s Legion Family has assisted those facing food insecurity.

Adjutant Tom Tanner said Post 21 was contacted by H.E.R.O.E.S. Care in St. Louis about hosting the food pantry after another local one had shut down. According to its website, H.E.R.O.E.S. Care is “a collaborative effort among well-established non-governmental organizations designed to provide complete and proactive support for members of all branches of the military and their families through pre-deployment, deployment, family reintegration and post-deployment.

“The National Guard armory (in Independence) was running the food pantry, but because of security constraints and all that, they had to quit,” Post 21 Adjutant Tom Tanner said. “(A representative of H.E.R.O.E.S. Care) came down and was talking about the pantry, and he said, ‘We’re really looking for a place to have one.’

“Myself and (then-post commander Mark Clark) kind of looked at each other and said, ‘This is really a no-brainer. It’s just another way for us to help veterans. So, we kind of took the project on. It’s a great thing, and it shows we care about our own families.”

H.E.R.O.E.S. Care provides some funding to stock the pantry. Post 21 also works with Kansas City-based Harvesters, a member of the Feeding America network that provides food and related household products to more than 760 nonprofit agencies. And Tanner said that in addition to members of the community donating to the program, Post 21’s Legion Family also has been very generous in providing financial assistance.

The food pantry provides primarily non-perishable times because of storage limitations, although Tanner said occasionally they have fresh fruits and vegetables, as well as some frozen items. And during last year’s holiday season the post was able to purchase turkeys and chickens to distribute.

Although the pantry’s hours are technically from 8:30-10:30 a.m. on the last Saturday of the month, food assistance isn’t eliminated to those days. “If I get a family that comes in and says, ‘I’m hungry. I need some help,’ I’ll go open up and give them a box of food,” Tanner said. “We’ve always got stuff ready to go for next month’s pantry.”

Only once month since the food pantry opened has the post not been able to man it – when too many members of the post’s Legion Family had contracted COVID-19. Tanner said the post saw demand initially go up during the onset of the pandemic, but that now it has leveled off. Approximately 30 families show up each month to get items from the pantry.

“We’re trying to reach out and get more,” Tanner said. “We know there are other veterans out there that need help. And your active-duty guys, they will not admit that they need help. They darn sure won’t admit it in front of their peers.”

Tanner said it only took the grand opening to see the impact the post’s food pantry was going to make. “One of the guys came up to our grand opening,” he said. “Very humble guy. Doesn’t like to ask for help, and he flat admitted that. But he said, ‘I’m in a situation where I just cannot afford to go get food.’ So, what we’re able to give them, we know it’s helping people.”