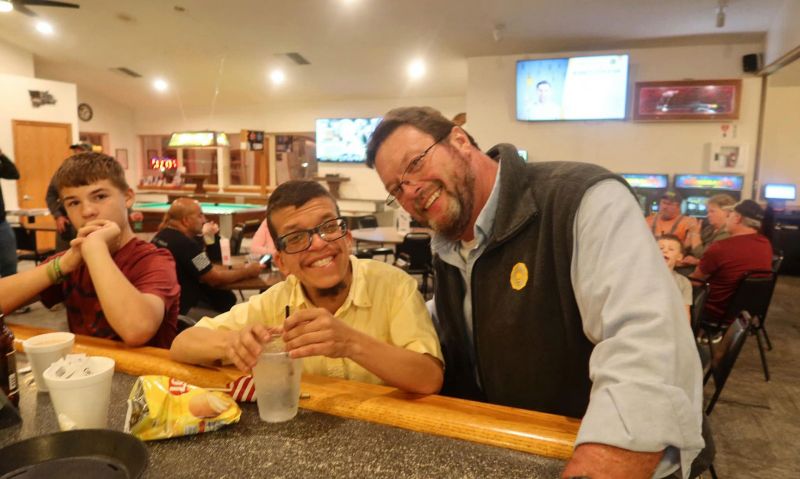 For around the past six years, the American Legion Family of Devereaux Post 141 in Howell, Mich., has hosted dances every two months for users of The Arc of Livingston’s programs. The Arc provides advocacy, information and referral and support services to individuals with developmental disabilities and their families.

And while the dances are meant to be enjoyed by the Arc citizens, they’ve also become a highlight for Post 141’s Legion Family, serving as a collaborative effort between the Post, Auxiliary Unit, Sons of The American Legion and the Legion Riders that brings smiles to all their members’ faces.

“It’s a huge deal for not only all the members of Post 141, but their families, too,” said Sons of The American Legion Squadron 141 member Reg VanWulfen. “This dance is not just a party. It’s life experiences, even for the Legion members. In the Sons, we have a family that comes in, and they have young sons: 9, 12 and 14. And they help out. They learn to help people. They do it as a family.

“We enjoy it. We have fun. And we don’t just have the Arc come in and have dances. We have members that get up and dance, party, joke, do different things to interact and talk. Social acts. It’s very unique.”

Post 141 had hosted similar dances years ago before they stopped. They were resumed around six years ago under then-post commander and current finance officer Jim Grimes. The pandemic brought a halt to them temporarily, but they resumed this year.

Post 141 Commander Bobby Brite, who also is a Legion Rider, said the success of the Arc dances is a credit to the teamwork of the post’s Legion Family and the view each brings to the project.

SAL Squadron 141 Commander and Chapter 141 Legion Rider Chris Jones said as a part-time driver for a community transportation system, he deals with many of the Arc citizens on a regular basis. “I get to hear a lot of conversations,” he said. “The No. 1 they talk about when it comes to these dances is they say they get to come and get to see their friends. We have made it to (where) it’s not just a place where they come. We’ve made it a place where their friends are at, and they get to hang with their friends.”

This year, at the urging of Jones, the Riders became involved. Chapter 141 members staged their motorcycles outside of the post that the Arc citizens were able sit on during the event.

“We want to make it better for them each time they come visit with us,” Jones said. “One of the concepts was that let’s get involved more members of the Legion Family. So I reached out to the Riders to see if they were willing, and the Riders came out.”

For Past Auxiliary Unit 141 President Terrie Harter, the Arc dances are special because of their effect on both the guests and the members. “The smiles on the kids’ faces are the best things, though,” she said. “You get out there and dance with them. They talk to you, and they want to take pictures together. We just become one big happy family. And the smiles on their faces when you’re out there dancing together, it melts your heart. It’s just breathtaking. I love every minute of it.”

Jones said the dances give the Arc citizens an opportunity to interact with people who view them simply as friends. “Let’s be honest: with some of their disabilities, they can’t just walk out … and visit people. They can’t go some places because of their limitations,” he said. “With that being said, when they come to our place, we do not look at them as any kind of special needs people or with disabilities. We look at them as our friends. They get to spend three hours not being stereotyped by our members. Our members truly want to be there and enjoy their time there.”