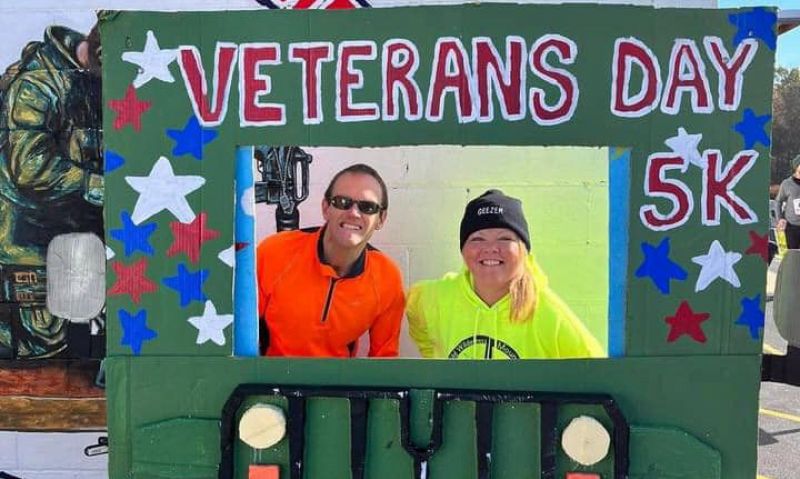 Lisa Knapp used to be an avid distance runner, and also spent her free time organizing various races in Illinois. Physical issues reduced her opportunities to run, but she continued to be involved in the planning, something that expanded to American Legion Post 210 in Danville, Ill., in 2017.

That’s when Knapp, with the help of the Kennekuk Road Runners club, organized Post 210’s first Veterans Day 5K, which takes place on the Saturday before Veterans Day and raises money for the post to fund its various programs. The sixth annual race will take place Nov. 5 at 11 a.m.; those wishing to register can still do so from 9:30-10:30 a.m. onsite the day of the race.

“My brother-in-law is a veteran, and my grandson is in the Marines,” said Knapp, a member of Auxiliary Unit 210 and chairman of the Post 210 Legion Family’s Entertainment Committee. “I ran marathons and half-marathons, and I ended up being race director for several years. After 12 years, my brother-in-law invited us to come to (Post 210) in 2016.

“I realized I needed to focus on something more, and I wanted to help (the post). I said, ‘You guys are struggling. You need some income.’ I said, ‘I’m going to do a 5K next year.’ I recruited some people from the Legion Family … and it started. And I plan on keeping it going.”

Since its inception, the Veterans Day 5K has raised more than $30,000; this year’s goal is $10,000. Fundraising efforts began in 2022 when members of Post 210’s Legion Family took to street corners in Danville using vintage World War I helmets as collection buckets. That effort alone netted $4,000.

Race participants pay a registration fee, while onsite there are multiple raffles that assist the fundraising effort.

The money raised goes to Post 210, which then distributes it based on need. “They have a maintenance fund, veterans funds, scholarship funds,” Knapp said. “They help children of veterans. There are all these different entities, and they distribute it.”

Despite COVID-19 still being a hindrance, last year’s event had 62 participants and raised $7,900, which helped make the post’s bathrooms handicap-accessible.

Knapp said events like the 5K help introduce a younger generation of veterans to what is an older population at Post 210, as well as provide an outlet for those veterans who may be struggling with mental health. “I’m trying to reach those younger people to show that this is a place for camaraderie,” she said. “And my goal is to have more veterans running this race than the general public. Once they start this and do a 5K, I think they’d want to keep doing it. That’s what I did.

“And I think it would help a lot of (veterans) having trouble with (post-traumatic stress disorder), I think it’s a great way of getting relaxed and opening your mind and being able to meet other people.