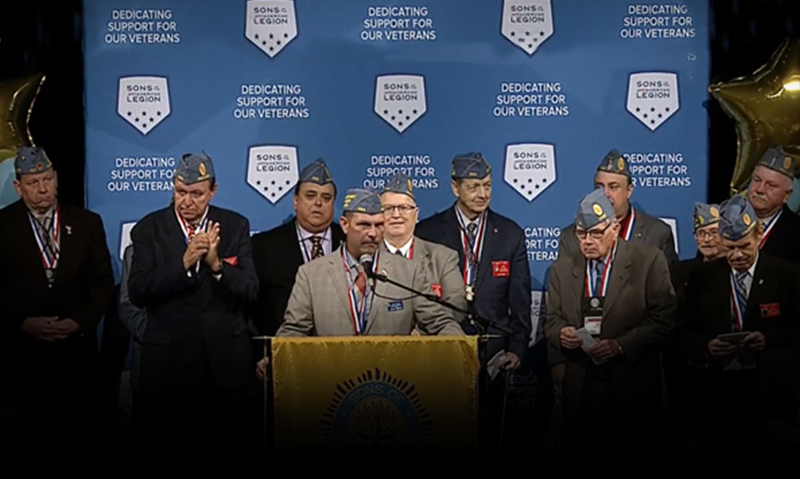 Chris Carlton of the Detachment of Indiana addresses the SAL 50th National Convention following his election as National Commander on Aug. 28, 2022, in Milwaukee, Wis.

The Sons of The American Legion elected Indiana’s Chris Carlton as their next national commander on Sunday as the SAL’s 50th National Convention came to a close.

Carlton, a member of Squadron 495 in Indianapolis, is the state’s first SAL national commander since Raymond Giehll Jr. in 2008 — coincidentally, Carlton’s father-in-law.

Giehll was the one to bring Carlton’s nomination to the floor in Sunday’s election, with Carlton being elected by acclimation.

Carlton has embraced leading candidate for American Legion National Commander James Troiola’s support for the “Be the One” campaign aimed at ending the stigma around veterans’ mental health issues.

“… I look forward to ‘being the one’ with you,” Carlton added.

He also voiced his support for helping reach Troiola’s $2 million goal for the Veterans & Children Foundation.

And Carlton is supportive of the goal announced Saturday of reaching 1 million SAL members by the program’s 100th anniversary in 2032. He encouraged the SAL to work on attracting new members while also retaining current members. “Do those buddy checks on members you haven’t seen in awhile,” he said.

The SAL also elected the five national vice commanders for the 2022-23 year. They are: