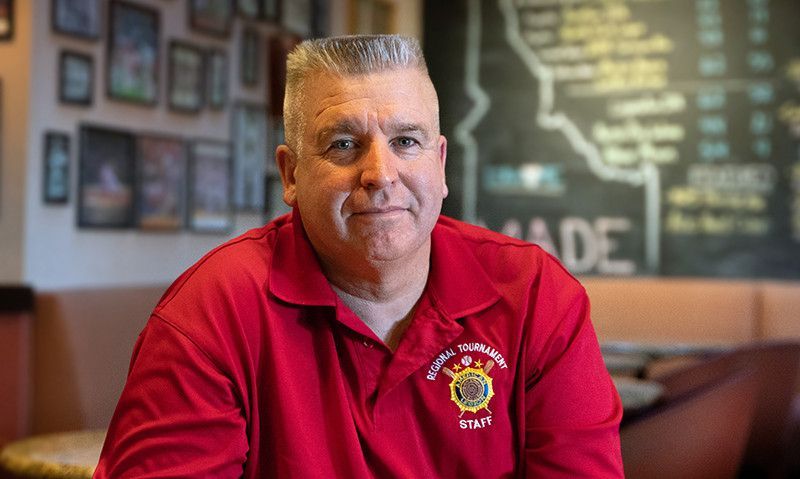 American Legion Department of Idaho Adjutant Abe Abrahamson provided attendees of the department’s Mid-Winter Conference in Boise on Jan. 8 with an understanding of how the Department of Idaho’s new One More Day program works. An example played out in an emotional conversation between Abrahamson and Vice Commander Area B Matt Wrobel, who recently lost his daughter from complications following a car accident.

Abrahamson: “Hey Matt how are you doing today?”

Abrahamson: “What do you mean here?”

Wrobel: “Just trying to make it through the day you know.”

Abrahamson: “You have a lot of things going on, and I know life has thrown you some curve balls lately, but are you really doing okay?”

Abrahamson: “Matt, are you thinking about suicide?”

Wrobel: “I have been thinking about it.”

Abrahamson: “Do you have a plan?”

Wrobel: “I’ve been drinking a lot and sometimes I think you know, take a few of these (prescription pills) and drink and not wake up to not have to deal with this anymore.”

Abrahamson: “So pills and alcohol would be your way to escape?”

Wrobel: “That would be the easiest way.”

Abrahamson: “Matt, you mind if I hang on to those pills? So, I know you’re a veteran. I know there is a lot of help out there for veterans. Would you be willing to receive some help?”

Wrobel: “I would think about it. I would at least like to look into it.”

Abrahamson: “If I found you a good place to go, Matt, would you go with me today?”

“One More day is a suicide intervention program,” Abrahamson said to The American Legion. “It’s geared toward reaching veterans at that critical time in their life where they are faced with some serious challenges and sometimes choose the option of suicide. We want to intervene at that time, work with that veteran, basically get them to a better place in their life through camaraderie and brotherhood and friendship.”

When a veteran is in crisis, the Department of Idaho’s One More Day program dispatches a three-person team to where the veteran is. In the scenario above, Abrahamson was the No. 1 person – the one who communicated with the veteran in crisis to identify what is going in his or her life that got them to contemplating suicide. “Eighty-two percent of veterans that commit suicide do it because of loneliness or loss of self-worth,” Abrahamson said.

While this open line of communication is being established, the No. 2 person onsite is making calls to secure treatment for the veteran at one of the 600 treatment facilities in Idaho.

“Our hope and aim at that scene is that we leave with that veteran,” Abrahamson said. “We want to take that veteran into some kind of care right then and there. We want to get them out of that crisis and into treatment.”

Upon arriving to a treatment facility, the dispatch team asks the veteran to sign a form that gives The American Legion permission to be notified upon his or her discharge from treatment. Once discharged from the inpatient program, Abrahamson is notified. He then calls the No. 3 person whose role is to make daily, ongoing contact with the veteran.

“Every veteran has something they like to do,” Abrahamson said. “Those inpatient programs are six to eight weeks, so you have a lot of time to learn more about this individual, his likes, dislikes. Reach out to them, find out how they’re doing. Do you need anything? Also, I belong to the Legion and we have this, this and this going on. If you feel like it, please come join us. Give them the opportunity to come down and enjoy some brotherhood, sisterhood, and that camaraderie that The American Legion is known for. To build back up their sense of self-worth and get rid of that sense of loneliness.”

The American Legion: How are veterans in crisis identified to the Department of Idaho?

Abrahamson: If 911 receives a call from a veteran in crisis, they’ll send the police officers to that location and at the same time they will contact The American Legion dispatch team. We would dispatch our three-person team to that critical incident. Once the law enforcement officers make sure that scene is safe and get the veteran away from a weapon or something he is going to harm himself with, then we are introduced to the vet and our three-person team takes over. (The program works the same if a family member of a veteran calls the dispatch team directly.)

We have worked with the Idaho Sheriff’s Association, Idaho Chief of Police Association, along with the state police to form that trust and respect between the law enforcement and The American Legion, and our dispatch teams, that we can go in and help. Not all of their law enforcement officers are trained in veteran suicide, veteran mental issues. Where when you have an active duty or a veteran, and you’re to talk to a veteran, you automatically have that bond.

TAL: How are the three-person dispatch teams trained?

Abrahamson: All dispatch teams start off by going to ASIST (Applied Suicide Intervention Skills Training) taught by LivingWorks. It’s a two-day, 8-hour a day, class. It’s a very intense training about suicide intervention – how to look for signs. It’s not about just showing up to someone’s house on a 911 call, but if you’re at work and somebody shows up who is normally a happy go lucky person but they’re nothing but doom and gloom, it teaches you a way to talk to them and wait for that opportunity to interject, ‘Are you thinking about suicide?’ Put them on the spot. You ask them that question and they have to answer it. And if they answer yes, do you have a plan? If their plan is to leave work and complete suicide, then you need not to let them leave work. We also go to Emotional First Aid training to help law enforcement officers and first responders who have been to a critical scene and witnessed (a suicide). We help those people cope with what they’ve seen.

Our teams are multi-faceted trained. We are here to help the veterans with suicide intervention, but we are also there to support our first responders if something happens the other way.

TAL: How many people are trained in ASIST?

Abrahamson: Right now, we have over 140 people trained in the state of Idaho. We not only work with The American Legion, but we also work with Code 3 to 1 Retired Law Enforcement Officers of Idaho, the Idaho National Alliance for Mental Health, Courageous Survival (mental health resource for veterans and their families), and importantly we work with and invite the Idaho National Guard – air and Army, and the U.S. Air Force – to our (ASIST) training. Because it’s not just veterans committing suicide it’s active duty too, and Guard and reserve. So if we can extend the skills that they need to where they can watch out for their fellow soldiers, battle buddy, whatever you call it, they can be that person that might help their battle buddy in a mental crisis.

TAL: What was one thing from attending ASIST that was an aha moment for you?

Abrahamson: They play a couple of videos. The first video is of someone doing it (suicide intervention) the wrong way. The gentleman that’s contemplating suicide makes four or five references or drops little hints that that’s what he’s thinking about, and the other person doesn’t catch on to it. For me when I’m listening to that I’m reflecting on that and thinking back on my life, ‘Did I ever do that? Did someone come to me for help, and I didn’t see the signs? I didn’t catch on?’

Abrahamson: QPR is what we call safe talk. It’s a four-hour class. It teaches you what words to say, what words not to say (to a veteran in crisis), how to get that person to open up. You don’t say, ‘I know what you’re feeling.’ Because I don’t know what you’re feeling. Or ‘I’ve been through that don’t worry about that.’ You just need to communicate with that veteran and show them that you care. Show them that they have somebody there that cares about them at their time of crisis. That’s what will end that situation.

Or, what if you got a phone call that said, ‘Hey, I’m a Marine veteran. I’m sitting here with a gun in my lap. Tell me why I shouldn’t kill myself.’ You don’t say, ‘Don’t do it.’ Give them a reason. If you don’t know how to react or respond to that individual, it could end bad. And none of us have that training and that is what (QPR) training is for. We are going to teach QPR to everyone that comes to summer convention. Because we think it’s important to help stop the numbers.

TAL: What happens if the veteran in crisis isn’t enrolled in the VA to receive mental health treatment?

Abrahamson: Luckily most of the places that we deal with will take our veterans at least for a couple of days. And at that time if they are not enrolled with the VA, we can get our state service officers working on it and communicating with the VA medical center, explain to them that we have a veteran, honorable discharge, who needs help. We try and expedite that service for them. We also have some (treatment) places that donate everything for a veteran. They are of the same mind that we are that if a veteran needs help, we are going to help them. Doesn’t matter what it takes, we are going to get it done. And when they are in treatment, we communicate with them through letters of support, asking if there’s anything they need.

TAL: The One More Day program is like a buddy check in that you’re meeting the needs of veterans by first making contact. Do you agree?

TAL: What is your why for being an integral part of the Department of Idaho’s One More Day program?

Abrahamson: I do the One More Day program because I can’t imagine what it would feel like for a family that had a veteran that served in the United States military to get home, to survive that, to live through that and to come home and think the only way he can be something or somebody to his family is if he or she took their own life. I can’t image that pain that that family would go through. I want to do everything I can to make sure no family in the state of Idaho has to go through that pain. That’s why I do it.