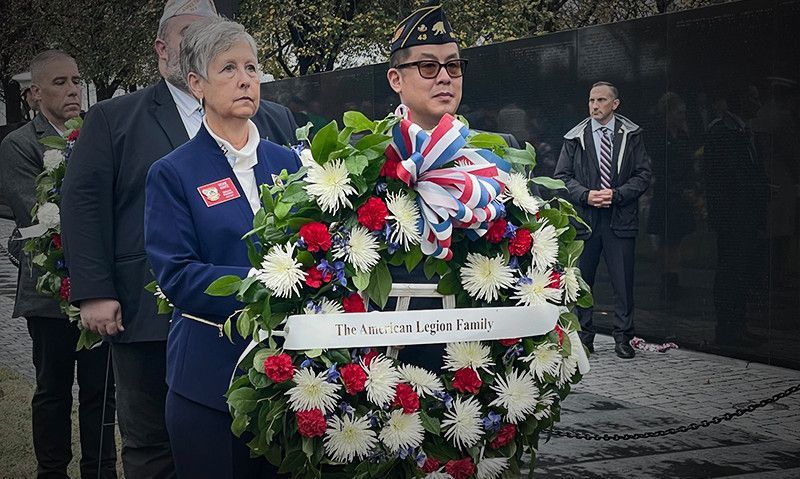 She is married to American Legion Past National Commander James Koutz, a Vietnam veteran and member of Post 200 in Indiana.

“Witnessing the flag presentation of the colors and seeing the American flag, knowing the freedom it represents is very special,” said Koutz, who was joined by American Legion Executive Director of Government Affairs Chanin Nuntavong at the ceremony.

“It’s an honor to be with you on this Veterans Day to commemorate the 40th anniversary of the dedication of this wall,” Secretary of Veterans Affairs Denis McDonough said. “An enduring, living monument dedicated to remembering the 58,281 brave men and women who died in Vietnam. Chiseled into the polished black granite and etched into the history of our nation are the names of the soldiers, sailors, airmen and Marines who answered the call to defend a country they never knew and a people they never met.”

These names have taught us the importance of remembering stories of valor and sacrifice, McDonough said.

“It is an extraordinary act to put on the nation’s uniform, leave the safety of your home, deploy to a warzone in a foreign land and fight for the freedom of someone else,” he said. “Our Vietnam veterans performed that extraordinary act during a time of great polarization and challenge here at home.”

“I come from a family with a proud history of military service, and one of my uncles served in Vietnam as a communicator,” Austin said. “He was the very first African-American Green Beret that I ever saw. And so he came home wearing his jump boots, and that green beret, and those jump wings. He was very impressive. My uncle was deeply and quietly proud of what he had contributed.”

It was the pride he saw in his uncle that inspired Austin to serve as well.

“Service lifts up others. It enriches your own life. And it makes you a part of a proud American story, part of the solemn duty that has moved so many patriots across the generations: to leave this country better than you found it.”

Austin also told a story about one of his fellow Iraq veterans who visited the Vietnam Veterans Memorial in 2008. The servicemember left his combat boots and a note on Marine Corps stationery at the Wall.

“He wrote, ‘Brothers, these are my lucky boots. They got me through two tours on the ground in Iraq. I figured you’d appreciate them more than the garbage man,’” Austin said. “His note continued: ‘The truth of the matter is, we owe you an awful lot. If your generation of Marines had not come home to jeers, insults and protests, my generation would not have come home to thanks, handshakes and hugs.’”

Austin thanked all past and current servicemembers for their service, patriotism and sacrifice.

“We owe our veterans not only our deepest gratitude but also our unwavering commitment to the democratic values that you have been so proud to defend,” he concluded. “Thank you, to all of our veterans, for answering your country’s call.”