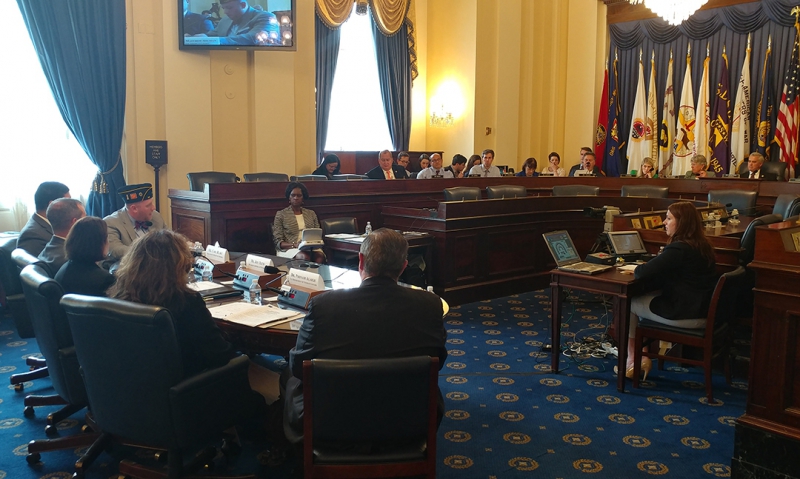 “The American Legion has reviewed the president’s budget request,” Shuman said. “While we fully support the administration’s proposal to increase the discretionary budget of the Department of Veterans Affairs by $4.3 billion, we would like to draw this committee’s attention to several components of this request that The American Legion calls on Congress to address.”

One of the highlights of President Donald Trump’s budget request is a $2.9 billion request to continue the Veterans Choice Program. Shuman said The American Legion supported this program as an emergency, temporary measure and insisted on a “sunset date” as did the House Committee on Veterans’ Affairs and other major veteran service organizations.

Through increased emphasis on eradicating all hidden wait lists and ensuring that all veterans asking for medical appointments were seen in 30 days or less, Shuman said VA quickly exhausted their community care accounts while Choice funding remained largely untouched.

But because of the funding mechanism used to support the Choice Program, VA was unable to adjust funding between their traditional contracting accounts, creating an unbalanced community care program that:

• Required former VA Secretary Bob McDonald to mandate that all appointment requests be pushed into the Choice Program because that was the only way VA was able to spend down the appropriated funds; and

Shuman said the Legion calls on the president and Congress to rededicate the funding toward supporting VA’s medical infrastructure and existing community care programs, as well as allow Choice to terminate as originally planned. “The American Legion remains steadfast in its position that a consolidated community care program replace the disparate contracting and procurement vehicles that have amassed over the years at VHA to supplement care for veterans when medically necessary care is not available organically at VA,” he said.

According to research from RAND, about one-third of servicemembers returning from Iraq or Afghanistan report symptoms of mental health or cognitive condition, and suffer from either major depression or post-traumatic stress disorder.

Shuman said this has increased the demand for mental health services at VA. Unfortunately, there is a national shortage of mental health care providers and the shortage is projected to grow acute over the next decade.

“According to a recent analysis by the U.S. Health Resources and Services Administration, the nation needs to add 10,000 providers to each of seven separate mental health care professions by 2025 to meet the expected growth in demand,” Shuman said. “The widening gap between demand and the supply of available behavioral healthcare providers is being driven by a greater emphasis on addressing mental health issues within primary care settings. Yet, the average wait time at VA is about four days for routine appointments and urgent care remains same day despite staffing shortages.”

The Legion calls on the president and Congress to increase funding at VA to eradicate staffing shortages and support American veterans with the superior services they have earned at their VA medical facilities.

Shuman said the struggle to care for veterans wounded in defense of this nation takes a terrible toll on families. In recognition of this, Congress passed, and former President Barack Obama signed into law Public Law 111-163, the Caregivers and Veterans Omnibus Health Services Act of 2010. The unprecedented package of caregiver benefits authorized by this landmark legislation includes:

• Cash stipends to partially compensate for caregiver time and effort;

• Caregiver health coverage if they have none; and

• Guaranteed periods of respite to protect against burnout.

“The comprehensive package, however, is not available to most family members who are primary caregivers to severely ill and injured veterans,” Shuman said. “Congress opened the program only to caregivers of veterans severely injured, either physically or mentally, in the line of duty on or after September 11, 2001. It is not open to families of severely disabled veterans injured before 9/11, nor is it open to post-9/11 veterans who have several service-connected illnesses rather than injuries.”

Shuman said the Legion has long advocated for expanding eligibility and ending the obvious inequity that Public Law 111-163 created. Simply put, all veterans should receive the same level of benefits for equal service, he said.

“The American Legion is optimistic that providing expanded support services and stipends to caregivers of veterans to all era is not only possible, but also budgetarily feasible and the right thing to do,” Shuman said. “We urge this committee and the U.S. Congress to allocate the required funding to expand the caregiver program to all eras of conflict and veterans who should be in this program.”

“The proposal to eliminate the Individual Unemployability (IU) benefit has got to be one of the worst proposals that The American Legion has heard in years and adamantly opposes this request,” he said. “The administration’s proposal would also round down, to the nearest dollar, the annual cost-of-living adjustment for service-connected disability compensation, dependency and indemnity compensation, along with certain education programs. The American Legion opposes any reduction whatsoever in the annual cost of living increases entitled to veterans.”