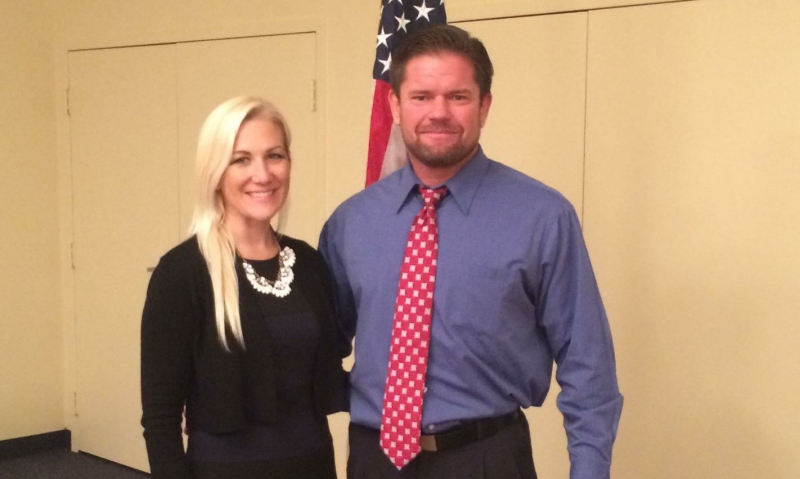 Shortly after retiring from the Army, Delta Force Command Sgt. Maj. Tom Satterly sat in his car in a parking garage with a gun in his lap. Satterly was deciding between putting the barrel in his mouth or aiming at his head.

“At that pivotal moment, it wasn’t a pill that saved my life, it was my phone vibrating with a text from a woman who had been filming our training assignment that day,” Satterly revealed to an audience at American Legion Post 180 in Vienna, Va., on Nov. 8. “I picked up the phone, instead of the gun, and promised to meet her and the group for drinks at the hotel bar. That was the first time she saved my life.”

Satterly served his nation for 25 years, including time in Mogadishu, Somalia, with Delta Force. He was among those involved in the ill-fated mission featured in the book and movie, “Black Hawk Down.” Satterly and his now-wife, Jen – the woman whose timely text saved his life – are pushing Congress this week to work on reducing the number of veterans suicides each day in the U.S.

He recalled his first combat experience, Oct. 3, 1993, the Battle of Mogadishu. The one-hour mission turned into an 18-hour firefight. After the first helicopter was downed, Satterly was among those who scrambled to the crash site.

“We were highly trained, we were the best in the world and we thought we were invincible,” Satterly said. “Then a friend across the street from me took a bullet to the head. He never moved again and no one got to say good bye or thank you.”

Satterly went on to serve combat roles in Iraq and Afghanistan, but that day more than 24 years ago in Somalia changed his life.

“No one comes out of combat unchanged,” he said. “There is no one unaffected by it, no matter what they tell you. We’ve all heard the statistics. This has reached epidemic proportions. We have lost more veterans to suicide than the lives lost during the Iraq and Afghanistan wars combined – the ultimate tragedy.”

The Satterlys want to start a nonprofit that would secure funds for more veterans to seek treatment. “Our hope is to offer scholarships to veterans, and their families where applicable, who are unable to afford the treatment they need to once again be the leaders in their homes and lives that they were so successfully in their service to us all,” he said.

They hope to rally Congress by focusing on how PTSD and TBI affect the veteran and family members.

“We are dying – some of us by our own hand, some of us by negligence and some of us by inability to thrive,” said Satterly. “Our families are dying and should not be considered collateral damage. Our wives suffer, the children who hold our future in their hands look now to see what will matter to you today.”

Jen Satterly learned a lot about love and commitment at an early age. Her grandfather had schizophrenia and the shock treatments would leave him disoriented. Her grandmother became the family champion, advocate and warrior through all the struggles.

“The challenges I face with PTSD are quite similar,” she told members of Congress this week. “The diagnosis is often not accurate and the methods of diagnosis are not up to standards. When, and if, we can find coverage for the help we seek, treatments are not comprehensive and have little effect.”

Satterly said he saw military psychiatrists, therapists and doctors who ordered standard treatments. “Pills that were supposed to be temporary became the treatment and grew to even more pills,” he said. “They tried to silence the symptoms without treating the cause. There is no healing in that.”

His healing came from Jen.

One day while dating she asked him about Somalia.

“I had not talked about that day in 20 years, but for two hours I cried while she listened,” Satterly said. “She told me it was OK to cry, OK to talk and that both were needed to heal old wounds. I thought she was crazy. I married her 2 ½ years ago anyway and that was the second time she saved my life.”

“I finally found out just this year why I’m still having issues,” he said. “Jen explained that my parenthetical nervous system never wants to shut down. My cortisol levels are always high. Years of high stress night missions make it nearly impossible to reach a state of calmness and get a decent night’s sleep.”

Even today Satterly finds a seat in restaurants where he can see everyone and switches lanes when approaching an abandoned vehicle. But it’s still a process.

“I am learning that the way back home for every warrior is to speak the truth, speak the pain, give it light and air and let it heal at its own speed,” he said. “To take some of the skills and wisdom gained from what scars the soul to reach out and help those who still don’t see they deserve it, still don’t know they’re worth saving, don’t yet realize that they have to have the courage to step up, save themselves and help others find the way home as well. This is our mission, we still have much to offer this country, our communities and our families. It takes the courage to open up and come clean. To stand up one more time, and share the truth with others.”

Jen describes their battle with PTSD as “an enemy hidden in the Trojan Horse of our loved ones.” But it’s not just their battle, it’s the same for every spouse or partner of those with PTSD.

“We need better testing and diagnosis,” Jen said in her testimony. “We need to look at PTSD as an individual struggle with individual treatment. This is not a one size fits all disorder. This does not just affect the solider. The casualties are numerous and they are all innocent.”