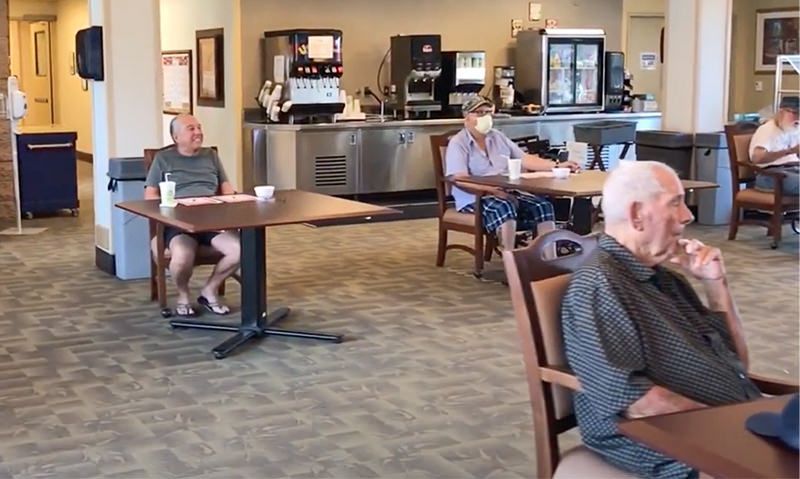 Just three residents of California state veterans’ home have contracted COVID-19 and only two have died, a sharp contrast to what’s transpired in similar long-term care facilities in New Jersey, New York, Massachusetts and elsewhere in the country. The California Department of Veterans Affairs (CalVet) thorough preparation and early response is being credited for helping prevent the highly contagious virus from infecting more of the 2,100 veterans who live in the state’s eight homes.

State veterans’ homes appear to have been hit especially hard by the outbreak. But a lack of comprehensive data about COVID-19 infections in federal, state and private nursing homes makes it difficult to compare how each is handling the infections. In addition, the residents of state veterans’ homes are primarily men – who appear to be more susceptible to the virus – and often have other health issues.

Nearly 140 residents of New Jersey’s trio of state veterans’ homes have died as a result of COVID-19 infections, 76 at the Paramus facility alone. The Long Island State Veterans Home in New York reported 68 deaths as of Tuesday. And the deaths of more than 70 at the Holyoke Soldier’s Home in Massachusetts has prompted federal and state investigations.

In addition, four Democratic U.S. senators asked the Government Accountability Office to review VA’s oversight of state veterans’ homes last week in light of a 2019 GAO report that recommended the agency improve its efforts. “The recent deaths of veteran residents and other care challenges at State Veterans Homes during the COVID-19 public health emergency remind us that VA’s implementation of these recommendations would contribute toward improved care quality at these facilities nationwide and better inform veterans and their families about the best care options,” the letter stated. “While VA does not supervise or control the administration of State Veterans Homes, VA pays for veterans to receive care at these facilities and is the only entity that inspects every SVH in the nation.”

Long-term care facilities have been coronavirus-infection hot spots since the first major outbreak surfaced at a private nursing home in Kirkland, Wash., in late February. Today, between a third and half of the nearly 86,000 COVID-19 deaths in the United States have occurred in nursing homes run by private companies, states and the federal government. The problem is so acute that the Center for Medicare and Medicaid Services is set to require nursing homes to report all COVID-19 infections to the Centers for Disease Control and Prevention.

Low pay for staff, who often work at multiple facilities may have contributed to transmitting the virus between nursing homes, according to Robyn Grant of The National Consumer Voice for Quality Long-Term Care. Infection control problems, which have been among the top 10 problems identified during federal nursing home inspections for several years -- and were the No.1 issue in 2019 – likely exacerbated the spread of the coronavirus, Grant says. A lack of masks, gloves and disposable gowns has also made it difficult to prevent or contain infections.

“We know (for-profit) nursing homes are short on registered nurses because they are trying to save money,” says Charlene Harrington, professor emerita of nursing and sociology in the University of California San Francisco School of Nursing who has studied nursing homes for 30 years. “Registered nurses are the ones who develop infection control plans, they have to assess patients, they oversee the isolation protocol and supervise the care staff. If you don’t have them, you aren’t able to mount an effective campaign to control the virus.”

A shortage of personal protective equipment has been an issue throughout the pandemic. The Long Island State Veterans Home turned to a painting company for mask donations in early April. CalVet has received donations of masks from businesses and private citizens. And South Korea is donating a half a million masks to VA, the agency announced Tuesday.

The private nursing home industry is lobbying for $10 billion in federal aid to pay for personal protective equipment, staff and testing, according to a May 6 letter the American Health Care Association sent to the U.S. Department of Health and Human Services. Any aid should come with strict conditions, Harrington says “They have been pulling so much money out of their nursing homes that they don’t have the reserves to do what they need to do,” she says. “If they are going to give nursing homes money, they should have really strong protections to make sure they are financially accountable.”

States are also asking for help. California, Oregon, Washington, Nevada and Colorado have joined forces to ask Congress for $1 trillion in COVID-19 relief funds. The money would fund public health programs, law enforcement and schools, according to the Los Angeles Times.

“The majority of the approximately 1,300 residents we care for in our six Veterans Homes are predominantly older and many have multiple complex health conditions which make them particularly susceptible to coronavirus,” said Joan Nissley, communications director at the Pennsylvania Department of Military and Veterans Affairs. “With an average age of around 80 years old, it is not uncommon for a resident to pass away during their time at a home. We greatly respect and honor these true American heroes in life and in death. We continue to be vigilant in our infection prevention and control plans and remain dedicated in doing everything we can to stop the spread of this virus.”

In New Jersey, meanwhile, National Guard medics and VA nurses have been assisting at the state veterans’ homes, where residents and staff alike have been stricken by the virus. “This is a global pandemic that has far-reaching impacts,” said Kryn Westhoven, a spokesperson for the New Jersey Department of Military and Veterans Affairs. “Our homes are no more immune to it than the rest of the community. Given that our population is especially vulnerable because of age and pre-existing conditions, the homes are doing everything in their power to ensure we curtail and mitigate the spread of the virus. Our Paramus and Menlo Park homes in particular are located in some of the hardest hit areas in the state.”

Some states appear to have done remarkably well combatting COVID-19. There have been 22 resident infections and seven deaths at Oregon’s two state veterans homes. Washington reports 47 infections and eight deaths among the residents of its four veterans’ homes. But California stands out given that it has the nation’s fifth-highest number of COVID -19 cases per capita, according to the Los Angeles Times.

CalVet is run by Dr. Vito Imbasciani, a 27-year veteran of the Army Medical Corps, whose father served with the Marines in the South Pacific during World War II. Three uncles served in Europe during the war and fought in the Battle of the Bulge. The department’s director of long-term care is Thomas Bucci, an Air Force veteran who had decades of health-care administration experience before joining CalVet.

Imbasciani and Bucci drafted a 38-point plan for dealing with a possible COVID-19 outbreak in mid-February, weeks before the World Health Organization declared a global pandemic, and they have continued to add to that blueprint. The extensive advance preparations included making sure California’s state veterans homes had an ample supply of masks, gloves and gowns for staff. By late February, visitors were required to use hand-washing stations set up at the main entrance of each veterans home before entering the building. And on March 15, CalVet closed the homes to all visitors except for families with loved ones in hospice care.

In a note to families the day before suspending visitor access, Imbasciani acknowledged the stress the decision would cause and promised nursing home staff would help families stay in contact with residents by assisting with video calls via cell phone or laptop. “I don’t take this decision lightly, but as a physician, I know it is medically necessary,” he wrote of the closure. “I ask for your patience and understanding and hope you know that every step we are taking is to keep you and your loved ones safe.”