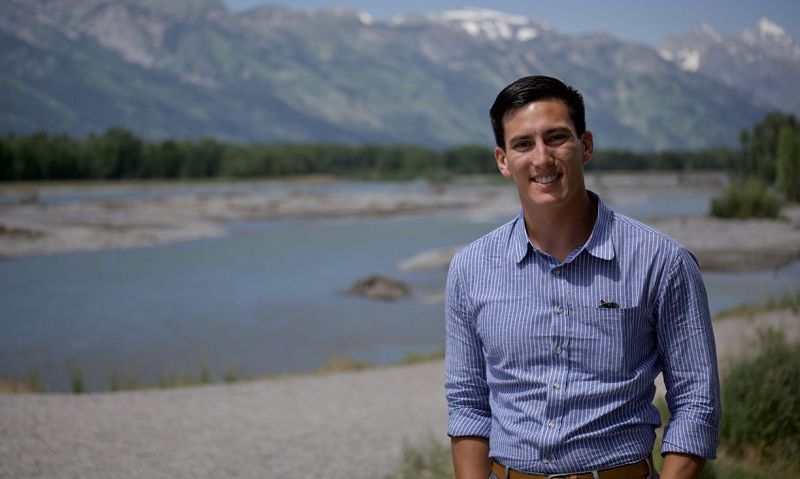 Bryan Crosson always loved creative writing. From a young age, the Marine Corps veteran used writing as a form of catharsis. So when one of his professors at Georgetown University reached out to him about possibly publishing a book, Crosson was struck by the opportunity.

“I figured if nothing else,” he said, “even if the book doesn't get published, it is an exercise in creativity for myself and it's a structure that holds me accountable to writing and creating something new every week.”

Writing his book, “The Lonesome Thread,” was more than just an exercise in writing and publishing for Crosson, who served as a military advisor in Sangin District, Helmand Province, Afghanistan — it was a period of learning more about himself and deeper self-actualization.

“I initially wanted to write it because I think there's a lot of power in the amount of time that we spend alone and how we structured that time,” said Crosson, a member of Post 297 in The American Legion Department of Maryland. “It’s this idea that the time that we spend out in the woods or in our own heads, alone and thinking about whether or not we made the right decision or wrestling with feelings of self-doubt, but then you gain this level of confidence from navigating the woods on your own … this is the type of confidence I think more people need in everyday life.”

In terms of learning about himself, Crosson says this was what he wanted to explore. “Taking that pretty simple idea and turning that into a bigger idea of the inner lives that we build for ourselves … that was very much a learning experience for me,” he said.

The reflections Crosson found in writing his book became timely with the onslaught of the COVID-19 pandemic.

“I started writing it in January because it was something that was deeply important to me,” said Crosson. “And then it just so happened that by March the world had stepped off the precipice into this crisis of a pandemic and social isolation.”

“The Lonesome Thread” started out as anecdotes that Crosson had about all the time he’d spent alone and the techniques that he’d used to structure his time from day to day. From there, the book blossomed as he started to collect stories that span place and time.

Crosson delves into stories of those who’ve taken the time to go into retreat and spend time alone — from historical figures like Ignatius of Loyola, the founder of the Jesuits, to Andy Puddicombe, the Buddhist monk and co-founder of a modern-day digital health company Headspace — they’ve used their experiences and lessons learned in solitude as catalysts that then allowed them to return to society and make better contributions than they had been before.

“There are quite a few anecdotes from my own life experiences, but I think what really makes it special is being able to include all of these stories and thoughts from other people and places,” Crosson said. “What I wanted to do with this is make it an entertaining read that's worth people's time, and to also create a kind of a toolkit for people. So I included tools for how to create time in your life.”

While Crosson was writing his book, he was also pursuing his Master of Business Administration at Georgetown University. Being self-disciplined in setting aside that time without distraction for himself was critical. That meant avoiding any kind of social interaction — even for just 30 minutes at a time.

“But if you take that time every day and aggregate it over six months, then you’ve given yourself a solid amount of time," he said. "Taking that time to be on my own … it made me more present. And that's another premise of the book as well.”

If people would take one thing away after reading his book, Crosson says he hopes that people come to grasp that time isn’t something to waste. “Whenever life does go back to normal, we'll look back at this time and we’ll want to feel like we did something useful with it. For me, it was writing this book," he said. "I think everybody should seek out some type of creative endeavor and then use that to enhance the relationships that we have and share the things that we create with people.”