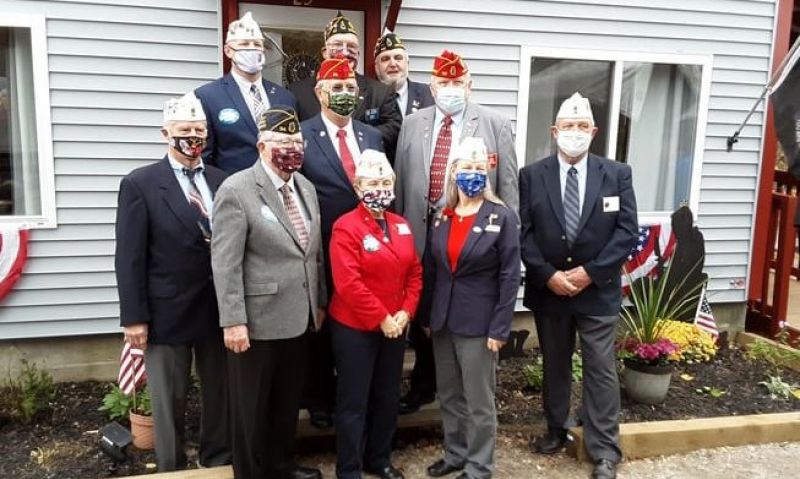 Preventing veteran suicide is more than just a goal for Department of Maine Legionnaire Don Mulcahy. It’s a very personal mission for the Vietnam War Navy veteran and commander of Lopeman-Potts Post 67 in Bridgton.

Mulcahy’s brother-in-law died by suicide, while the Legionnaire’s daughter attempted suicide. Both were veterans. And Mulcahy himself contemplated suicide during a serious illness years ago.

“So I know what these people are going through firsthand,” Mulcahy said. “I know what happens to a family – the dynamics, the anger. I know how (my daughter’s suicide attempt) affected her brothers and the anger. To them, she tried to murder their sister. I saw what happened in the family.”

Those experiences have driven Mulcahy to reach other veterans before they get to the point of contemplating suicide. A renovation at Post 67’s 161-year-old building that took place over the past 18 months is part of that mission.

But the renovation has gone beyond physical. Post 67 has refocused its mission to assisting the community – veterans and non-veterans alike – through a variety of services.

The post had been down to eight members before its revitalization. On the physical side, Mulcahy said the post was looking at an $85,000-$95,000 price tag just to make habitable a facility that he called the “largest eyesore in the town”. The inside of the building “looked like the worst episode of ‘Hoarders you’d ever seen,’” Mulcahy said. “We filled a 40-yard roll-off dumpster in three hours.”

But through donated labor, fundraising and the generosity of others who donated supplies – including a new roof, new furnace and new driveway – it completed the renovation project while leaving the post with no debt. A garden dedicated to veteran suicide awareness was planted in front of the post by local high-school students.

The improved facility helped expand the post’s role in its community. At one time having trouble getting his Department of Veterans Affairs and Social Security benefits before getting assistance from former Department of Maine service officer Amedeo Lauria made Mulcahy ask “Why is a resource like (Post 67) not being utilized for this purpose? If that’s not No. 1 in the Four Pillars, I don’t know what is. So that started the drive.”

The post began attending the Fryeburg Fair, Maine's Blue Ribbon Classic Agricultural Fair that attracts more than 150,000 attendees annually. There, the Legionnaires have a location set up to interact with veterans from all over the nation who attend the fair. Mulcahy said they were able to prevent two veterans thinking about suicide – one in Virginia and another in Tennessee – by putting those veterans in contact with the proper resources.

The post has worked with the Elks Club to get homeless veterans into subsidized apartments and provide them with food and furnishings. A post service officer maintains regular hours at the Bridgton Community Center. More than 100 veterans have been enrolled in the VA health-care system through Post 67 efforts – many of whom didn’t have access to an electronic means of enrolling or using telehealth.

“We’ve got a computer at the office at the post dedicated to taking care of these people in town and the surrounding communities,” Mulcahy said. “They can come to the post, they can sit down with one of our people who can get them on. They can do a virtual appointment. Once their appointment starts, we walk away. They’ve got the cubicle to themselves. We’ve got a special laptop that has no memory base. Everybody has their own thumb drive, and when they leave they just take the thumb drive with them.

“This is a service we need. To me, this is the job of The American Legion. We’re helping veterans.”

Post 67’s service officers also visit area veteran food banks to perform outreach for veterans that may not otherwise seek American Legion assistance. A special effort has been made to reach post-9/11 veterans. “We have younger Legionnaires working with these people,” Mulcahy said. “They understand them.”

The post also will host support groups for post-traumatic stress disorder and addiction, while a joint effort with the Togus and Portland Vet Centers will provide mental health services. Amidst the pandemic Post 67 delivered food to veterans who couldn’t risk leaving their homes.

And involvement with youth has returned, including post members going into the schools to read chapters of “Sgt. Stubby” and inviting those same youth to a showing of the “Sgt. Stubby” movie, complete with free popcorn.

“We teach the flag etiquette. We teach Americanism,” Mulcahy said. “It boosts our membership. People see this. The kids all go home and talk about it. You’re making a difference, and it’s such a positive difference for the Legion itself.”

“People see what we’re doing. They’re anxious to be a part of it. It just works.”