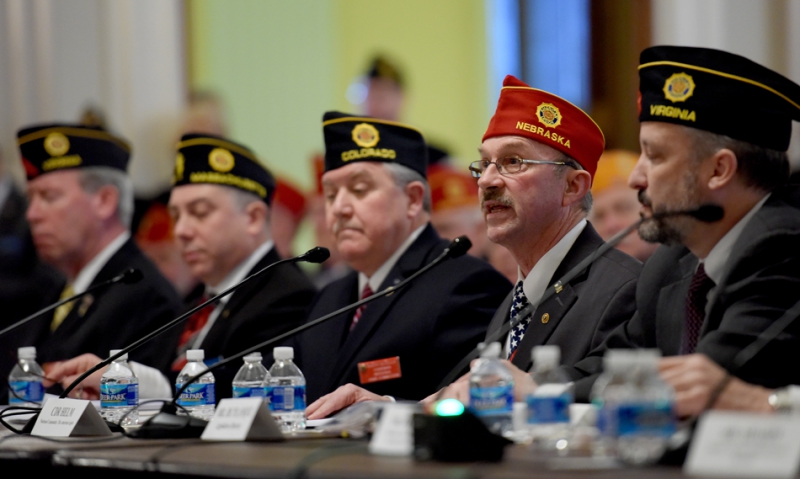 In a hearing room packed with more than 300 veterans and their families, American Legion National Commander Michael D. Helm laid out a wide-ranging legislative agenda before members and leadership of the House and Senate Committees on Veterans’ Affairs. “The prevailing concern,” Helm told the lawmakers, “is transition assistance.”

Helm called for action to expand VA-recognized treatments for post-traumatic stress disorder (PTSD) and traumatic brain injury (TBI). He cited 2014 American Legion survey results that showed 59 percent of PTSD-TBI patients felt no improvement as a result of their VA treatment plans and 30 percent had quit their plans altogether because they did not work.

“For tens of thousands, VA’s current prescription is not working,” Helm said. “This breakdown contributes mightily to the high rate of veteran suicide, substance abuse and homelessness that our nation – and The American Legion – cannot abide.” He asked Congress to study alternative treatments and call on VA to accept them. “Introduce and pass legislation that will require VA to recognize treatments other than those that are measured in miligrams and doses per day.”

During the hearing, Helm fiercely defended VA against any attempts to privatize its health-care system in the long term.

“The American Legion applauded emergency legislation to allow VA patients to use non-VA providers if they were waiting a month or longer to see doctors, or if they lived far from VA facilities,” Helm testified. “But let me be clear. The American Legion supports Choice Cards only as a temporary fix to the bigger problem of VA access. We adamantly oppose privatization or the vouchering out of VA care as a long-term solution. Veterans need VA. It’s up to us to repair the access problem and restore trust, not send veterans down the road for help somewhere else.”

Helm was introduced to the committee by Sen. Jerry Moran, R-Kan., who calculated the distance from Helm’s home in Norcatur, Kan., to the nearest VA facilities. “It’s 267 miles to Denver,” Moran said. “It’s 287 miles to Wichita. It’s 287 miles to Omaha and the nearest CBOC (Community Base Outpatient Center) is 100 miles away. I appreciate the perspective that this commander will bring about caring for all veterans regardless of where they live in the United States.”

“The American Legion sent expert teams across the country – from Phoenix, Ariz., to Bay Pines, Fla., and many places in between,” Miller explained. “You coordinated with VA, set up command centers, and tangibly helped thousands of veterans access health care and benefits, which had eluded them for years. You changed lives, and you may have saved lives.”

Miller also recognized The American Legion’s traditional role both as advocate and watchdog of VA. “As your testimony notes, The American Legion is working with VA, not against it, to improve service and restore trust,” Miller said. “Due to the hard work and dedication of The American Legion’s 2.4 million members, veterans have been provided with professional benefits counseling and claims assistance; transition assistance services; employment opportunities; and, countless other manners of assistance.”

Helm also reminded the committee that Americans are still in harm’s way as the Global War on Terrorism continues. “Sadly, some will come home from the fighting having made the ultimate sacrifice. They will arrive at Dover Air Force Base in coffins draped by our nation’s enduring symbol of freedom. I will ask once more for Congress to support the majority of Americans in co-sponsoring and passing a bill introduced in the House last month that would amend the U.S. Constitution to protect our flag from desecration.”

Download the 2015 American Legion Legislative Priorities booklet at this link.