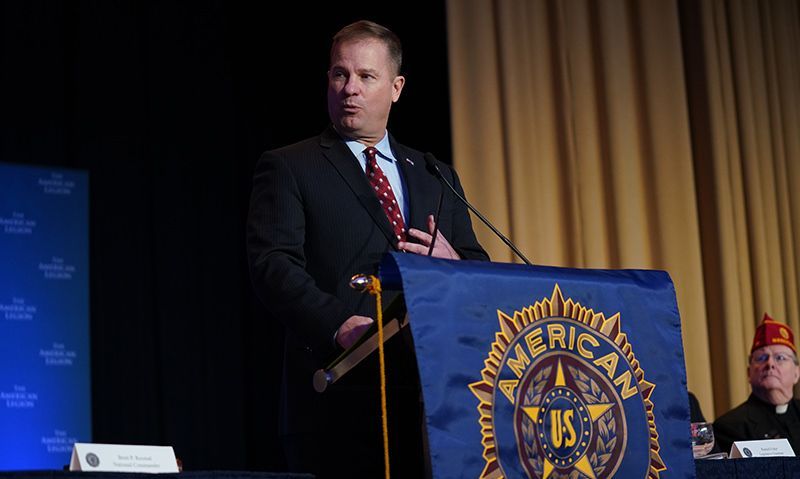 Fourteen of the 20 to 22 veterans who commit suicide every day are not on VA’s radar screen, estimated Jim Byrne, the department’s Acting Deputy Secretary.

“The number of veterans taking their lives every day is completely unacceptable,” Byrne told American Legion Family members Feb. 26 during the Commander’s Call at the annual Washington Conference. “It is the Number 1 clinical priority for the Department of Veterans Affairs. There are some good things going on but this is not one of them. It is an area where we are concentrating a lot of our effort and time but we have not broken that code.”

“Through the crisis line they have dispatched emergency services nearly 100,000 times,” Byrne said. “Those are some pretty shocking numbers. The problem is that we are reaching only six of those veterans.”

Byrne asked for help from the American Legion Family, supporters and communities.

“We’re asking for your help to not only reach out to veterans but to connect with their families and to let them know that we can help them by providing treatment,” he said. “But if we don’t know who they are, we don’t have a chance to do that. That’s where you can be tremendously helpful.”

During his 25-minute address, Byrne detailed areas where he says VA is showing improvement.

“The state of the VA is good but more importantly it is getting better,” he said. “We are in the midst of the greatest transformation of the VA since Gen. Omar Bradley was at the helm.”

He noted several independent surveys that lauded VA’s care, including a study by Dartmouth College. “VA health care is as good or better than any care that American people get in any part of the country,” the December report concluded.

Among the goals, Byrne said, is a VA “that veterans choose to come to.” Still, he outlined several key priorities of the department.

The first, Byrne said, is customer service. “It’s tremendously important; providing care, services and benefits for our veterans in a fashion worthy of their service.”

He told the audience that VA created a Veterans Experience Office that scores several key areas including “effectiveness of service, ease of access, emotional experience and overall satisfaction. I am pleased to report that all of those numbers are climbing in the right direction.”

Next up is the Mission Act. Byrne described it as “the most transformational piece of legislation in the VA.”

Simply put, it is getting veterans “the care they need, when and where they need it. It combines seven community care programs into one and into a more efficient manner.”

Byrne credited the Mission Act for the success of Telehealth, which allows patients and doctors in different states to communicate directly. Telehealth had more than 1 million such visits in the past fiscal year, an increase of 19 percent, Byrne said.

He also discussed the collaboration between VA and the Department of Defense (DoD). “We want to make sure that our veterans are transitioning well.”

As an example, Byrne cited the $16 billion project on electronic health records. “We’re taking the veterans’ footprint from the time they step on the yellow footprint to the end of their lives. It’s a seamless record.”

Among the differences, he noted, is that the electronic record shows lab results, prescriptions, MRIs and other details.

“It’s so that the providers for our veterans have a holistic picture of the veteran for their wellness. There’s also a safety component: to prevent over-prescriptions or double prescribing things that could be harmful to veterans.”