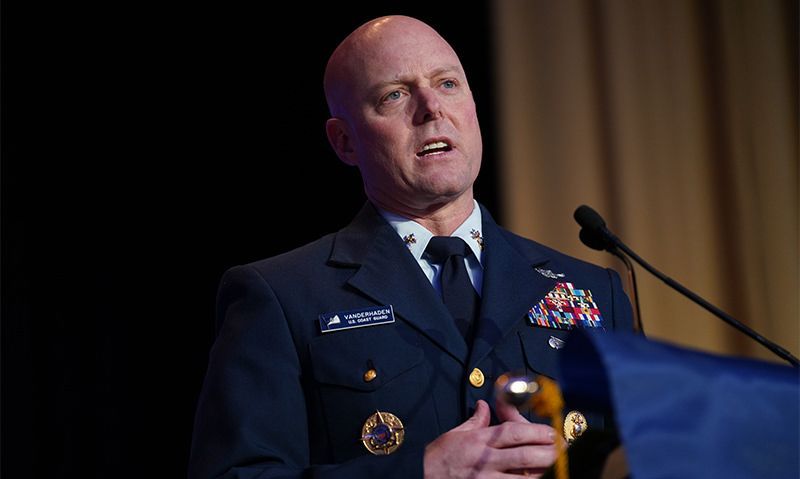 When the federal government shutdown began four days before Christmas, Coast Guard Master Chief Petty Officer Jason Vanderhaden sent word to his senior enlisted to not worry. “Congress will take care of us," he said.

Yet the shutdown continued, and, on Jan. 15, Coast Guard personnel did not receive pay. Immediate financial relief was provided to thousands of Coast Guard families through The American Legion's Temporary Financial Assistance program, which distributed more than $1 million in grants to Coast Guard members with minor children in the home.

“On behalf of all the men and women in the Coast Guard, and on behalf of the commandant, I want to say thank you to The American Legion for all you did in taking care of our fifth armed service,” Vanderhaden told the American Legion Family on Feb. 25, during the Commander's Call at the Washington Conference. “The American Legion came through, and it wasn’t a loan; it was a 'thank you for your service,' is what that was. And we really appreciate it.”

Specifically, The American Legion’s TFA grants helped junior enlisted Coast Guardsmen with families, who Vanderhaden said faced the most anxiety during the shutdown.

“The junior enlisted are the ones who are getting the work done," he said. "They are the ones out on the front lines doing the mission, and we need their heads in the game. The American Legion allowed the Coast Guard to keep our junior folks' head in the game.”

The lapse in pay will probably have some long-term effects with recruiting and retention, Vanderhaden added – new recruits saw that the Coast Guard didn’t get paid, and the lapse in appropriation is still fresh in the minds of those deciding whether or not to re-enlist. However, “the other talking point that we have (for recruiting) is look how the communities, the veterans service organizations, rallied around us,” he said. “I think folks want to re-enlist because they feel the love. They feel cared about. They feel like if something bad happens to them, The American Legion and other organizations are going to step up. What you did was a big deal for retention.”

“When (Coast Guardsmen) are not getting paid, as a branch of the military, that weighs on them," he said. "They wonder why they are not being treated the same (as the other branches of service). That is something we have to reconcile. I want to say thank you to The American Legion for your support of the Pay the Coast Guard Act and tying our Coast Guard pay to the rest of the (Department of Defense).”

“You said, ‘Hey, we’re going to take care of you,'" Vanderhaden said. "You wrapped your arms around the Coast Guard, and we couldn’t have continued to perform our operations without you. We will always be in your debt for your generosity, for your help. Again, that’s what you do.”