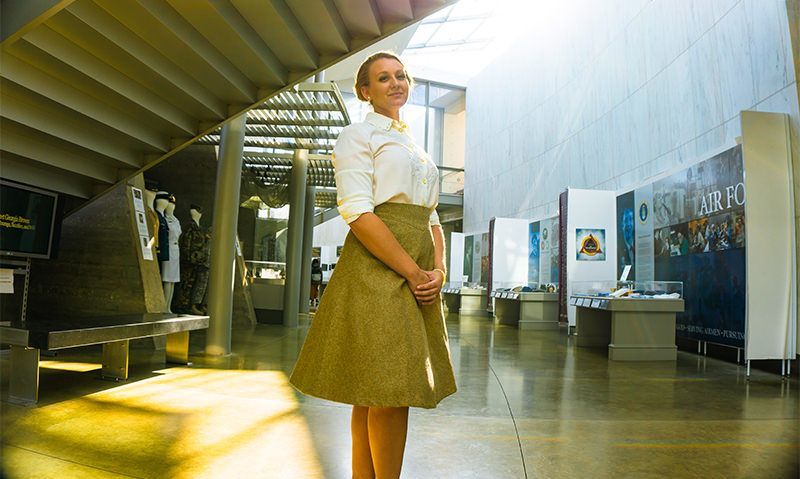 If you have ever visited Arlington National Cemetery, you've traveled down Memorial Avenue. Before you make a sharp left guided by security to the parking garage, you likely saw Arlington's ceremonial entrance, also known as Military Women's Memorial.

After proceeding through the visitor center, you stood in line only yards away from the only prominent national memorial honoring all women who have defended America throughout history.

I bet you walked right past it. I know I did. I didn't realize it then, but at that moment, it was symbolic of the many issues faced by women veterans, including myself, both during and after serving our country, to be overlooked much like the memorial itself.

Living Herstory: More than a memorial

While Arlington National Cemetery is visited by millions of people, the Military Women's Memorial, formally known as Women In Military Service For America (WIMSA), is lucky to surpass over 100,000 visitors annually.

I had only heard about the memorial in 2018 after paying my respects at the cemetery. I saw a sign, and my curiosity took over. I found myself on the terrace, where an arc of large glass panels on which quotations from and about servicewomen are etched. This arc of glass introduces natural light into the memorial's Education Center.

In front of the hemicycle wall, the lower terrace is the reflecting pool and Court of Valor. I looked down and thought, wow … this memorial is for me. Still serving when I thought, well, I am not a veteran yet, so maybe this wasn't the place for me, however. Then I walked inside. I was met by portraits, artifacts and history of the women who forged the pathway to allow me to serve in the capacity I could today.

The memorial's Education Center, located at the heart of the hemicycle, is a computer database where you can register your loved one's stories. I began searching for women I had heard of but seldomly saw in my history books. There they were, photos, military histories and individual stories of registered women.

I was shocked to learn that over 3 million women have served our country, and only 290,000 stories had been collected. That means 2.7 million women veterans haven't shared their stories. I was also shocked to discover the Women's Military Memorial was less than 25 years old. I only predated the memorial by a few years. Yet, all I could l think of was in January 2016, all military occupations and positions became open to women, without exception. Let that sink in.

"No, that can't possibly be right," I said to myself. Women are actively fully integrated into combat roles deliberately and methodically only within the past few years.

Nonsense, women veterans will tell you we have been attached to combat units, taken and returned fire, and know what it is like to not receive the same awards because, on the books, you weren't supposed to be there. Based on the exhibits and stories I read, women have been an all-volunteer force since our country's formation. So why has it taken so long for the public to realize our contributions? Why, as a group has, have we not spoken up sooner? Why are we allowing ourselves to remain invisible despite changing social norms?

We haven't made as much progress on the books as we would like to believe. Despite always being an all-volunteer force, women were not formally under military command until the early 20th century. Thanks to the 1948 Women's Armed Services Integration Act, granting women permanent status in the military and entitling us to some veterans' benefits would gradually improve thanks to the women's rights movement and workplace discrimination reform.

For reference, the Women's Armed Services Integration Act is only 72 years old. Whereas the President Emeritus of Women's Military Memorial, Brigadier General Wilma Vaught, turns 91 this year. Despite years of fighting to be recognized, we have not made as much progress as we think. The writing is on the walls; the movement doesn't always mean progress.

More than 30,000 women leave the military every year. Women often refer to themselves as "I was just" followed by the military's job and are less likely to identify with calling themselves a veteran. Believe it or not, women are projected to make up 18 percent of the veteran population by 2040.

As more women transition from active duty to civilian life, they will face unique challenges. Like the layers of an onion, women will experience a lack of community or connection to service and resources depending on their geographic location.

For example, some women may lack child care assistance and affordability if they're single mothers or don't have a family locally. Others may experience tackling going back-to-school and/or financial instability due to unemployment, working a part-time or full-time position. The ranks, titles, and experiences don't always transfer into C-suite salaries and require adjustments to lifestyle and balancing the bank account. At the same time, cultural stereotypes and the gender pay gap still co-exist with one another.

In the past decade, women veterans' disparities in services compared to the male counterparts differ significantly. More recently, many women veterans have found their voices in the #MeToo and #IAmVanessaGuillen movements to confront sexual harassment, toxic culture and leadership biases that directly impact servicewomen. This inevitability means that many women veterans who likely had poor military experiences have locked away their stories and are less likely to embrace the veteran title after service. Not all, but it happens.

Unfortunately, less visibility means we can't make progress. We need to make a difference for the next generations without a collective effort to take back the narrative to educate, advocate, and legislate for long-term change. Women use the skills and experiences from their military service to make achievements in their careers and contributions within their communities and become public service leaders. Their service and stories matter, and they will no longer be overlooked.

It is time to take back the narrative! March is Women's History Month, and there has never been a time like the present to share our stories and be a part of #Herstory. Our stories help make our contributions a visible part of American history, illustrate our contributions in defense of our nation alongside our male peers and can serve as inspiration for generations to come.

If you've ever visited Arlington National Cemetery in Arlington, Va., be sure to visit the Military Women's Memorial and educational center before you hit the trams to expand your understanding of women's stories of service, sacrifice and achievement. It truly is a gem hidden in plain sight.

Learn more about registering your story or that of a loved one at the Military Women's Memorial by visiting their website.