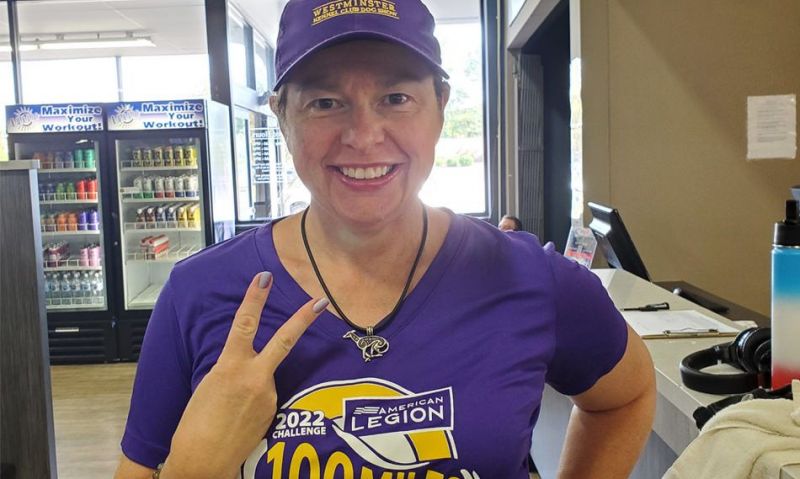 In Davidson, N.C., Michelle Parris dedicates each of her walks to Mike Gunkel, a Marine veteran and her partner of 12 years who died in 2020.

She’s making her miles count to deal with her grief and to do good for others, as part of 100 Miles for Hope – a fitness/wellness event in which participants log 100 miles by Labor Day, Sept. 5, as they fundraise for The American Legion Veterans & Children Foundation. All proceeds from registrations and donations go directly to supporting disabled veterans and military families. (Learn more and register for the third annual challenge here.)

The first year, she did 200 miles power walking; the second she rode 100 miles on a trike due to an injury; and this year, she’s back on foot.

“I just hit the pavement old-school style, put my Hoka (shoes) on and out the door I go with my music. I know exactly how far the four-mile walk is,” Parris said.

In 2020 during the first 100 Miles for Hope, Parris could tell Gunkel was not doing well physically, noting some changes, she said. But she didn’t realize the extent of the personal and health issues he had been hiding until she received an urgent call from the hospital the Friday after Labor Day. He had congestive heart failure and was put into a medically induced coma. Parris said she had to argue to be present because of Covid-19 restrictions, and she honored his end-of-life wishes, staying with him until after he passed.

Miles completed and partner gone, Parris decided to start her miles over, logging 100 more power walking just for Gunkel. The first walk after his death, Parris’ shuffle of music delivered a message from a song she’d never heard before by one of Gunkel’s favorite artists, Ozzy Osbourne. It was “See You on the Other Side.”

Having met online, Parris and Gunkel first met in person at a renaissance fair and hit it off. After a miscommunication led to Parris being stood up, Gunkel apologized.

“‘You, sir, may ply me with food, drinks, baubles and gifts,’” she told him in her best English accent. “‘And maybe — just maybe — I will let you keep my company.’ And he did after that for 12-and-a-half years.”

Parris recalled Gunkel’s love for cooking and barbecue, a native Texan, along with his wit. She said his military service illustrated his investment in helping others. In 1983, stationed in North Carolina, she said he’d just finished dropping off his buddies when he heard the news about the bombing at the U.S. Embassy in Beirut. He whipped his car around, collected his friends and returned to base. He volunteered through work.

“He would be one of those 10 percent doing 90 percent of the work,” she said. And, she said, he believed in Parris’ dream of showing Italian greyhounds, supporting her all the way to the Westminster Kennel Club Dog Show. “He saw that in me. He knew I could get there and he believed in me,” she said.

Per Gunkel’s wishes, there was no funeral, which Parris said has prolonged her grieving process. His ashes were scattered across two favorite renaissance fairs.

100 Miles for Hope has become a way to give back and to honor Gunkel’s memory and generosity, as well as a way to cope with emotions.

“(The walks) mean a lot of things. Part of it is to get the anger out, to grieve. Sometimes I just cry on my walks. Sometimes I'm remembering our happier times. It's really all of that, and more,” she said.