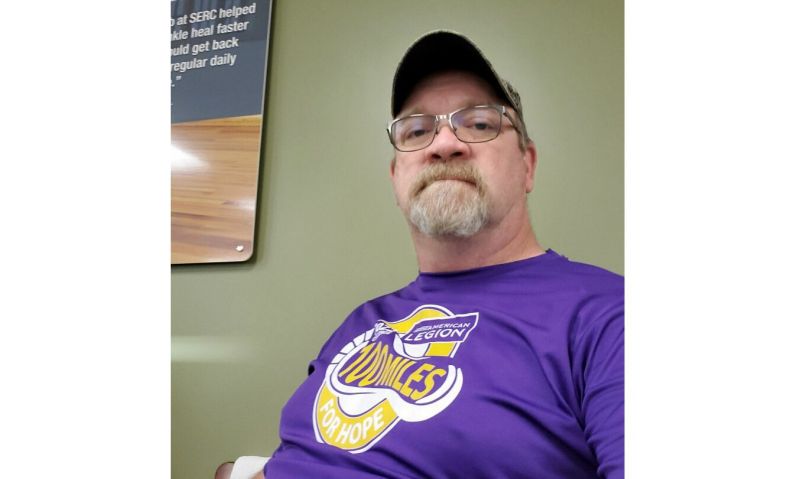 After back surgery in September 2021, retired Army Staff Sgt. Louis Walling couldn’t walk on his own. In 2022, he aims to log 100 miles walking, riding his stationary bike and at physical therapy. He’s logged about 85 miles so far.

He’s participating in The American Legion’s 100 Miles for Hope, a fitness/wellness event in which participants log 100 miles by Labor Day as they fundraise for The American Legion Veterans & Children Foundation. All proceeds from registrations and donations go directly to supporting disabled veterans and military families. (Learn more and register for the third annual challenge here.)

“I had to pretty much learn how to walk all over again. So, it's been a pretty eventful recovery,” said Walling, a member of American Legion Post 411 in Lansing, Kan.

Walling’s injury was cumulative with a few particular traumas to the back along the way. He served from 1986 until 2012. He was stationed at Fort Wainwright, Alaska, early in his career. There, running on the ice resulted in a few falls.

And in 2007, one particular fall severely compromised his fitness. Walling slipped and fell in the parking lot at work, which he said was “the straw that broke the camel’s back.” He landed on his hip and bulged one of his disks.

After that, pain and numbness in his leg prevented him from running. He was put on a permanent profile for walking his Army fitness test.

In 2021, years after he retired, he twisted his back the wrong way while gardening. A summer of physical therapy didn’t help this time. Neither did a chiropractor, pain management or dry needling.

Finally, a spine specialist told Walling he could fix the problem now, surgically, or he risked being “‘one fall away from being in a wheelchair,’” he said.

He had the surgery — which involved removing a disk and fusing the spine — in September 2021. Because he had to stay in bed post-op for weeks, recovery involved learning to walk again, with the help of a physical therapist, first with a walker, then a cane, adding distance and terrain. Exercises to strengthen ankle and hip mobility and balance further support his efforts.

For others who are trying to balance health and recovery from an injury with fitness, Walling said that trust and attitude are central to progress.

“I rely on the professionalism of the physical therapists, listening to your doctors, doing what they say and not trying to push it too fast. I know sometimes it’s really hard. You want to get going, and you go, ‘I feel good. I feel like I could do that today.’ But then later on, you’re like, ‘Oh, I shouldn't have done that.’

“One thing is keeping your spirits up when you’re first getting started and you don’t feel like you’re getting anywhere and it still hurts. You just gotta keep positive thinking, set smaller goals and just realize it takes time to heal.

“And take into account your age. As you get older, it takes longer for your body to repair itself. It takes a little bit longer for you to get back to where you want to be — and sometimes realizing you’re not gonna get all the way back to what you used to do.”

He also credits his support team, including his wife, family, friends and colleagues, with his success.

He gets in miles when he can, sometimes “already loosened up” after physical therapy, sometimes during lunch at work at the hospital at Fort Leavenworth. When he returned to work, he started walking the halls, then around the building and now around the block.

“Being able just to walk, get out and walk a mile or two on the concrete, it’s not too bad right now. But to walk across the yard or up a hill or something like that, that’s still a great challenge,” he said.

“Walking in the grass, you don’t know what’s underneath. You’ve got rocks and mole hills, and it’s uneven and you just have to adjust for it. Before I never thought about that. Now I do, because I don’t want to end up on the ground,” he said, laughing.

His spirit contributes to his progress, which further boosts his spirits.

“Getting out there and getting a good sweat on, being outdoors, and seeing and taking those steps and feeling better each day helps keep your spirits up,” he said. “At physical therapy, they take the measurements and I’m making gains. And seeing those gains each month, it’s been a great positive influence for me.”