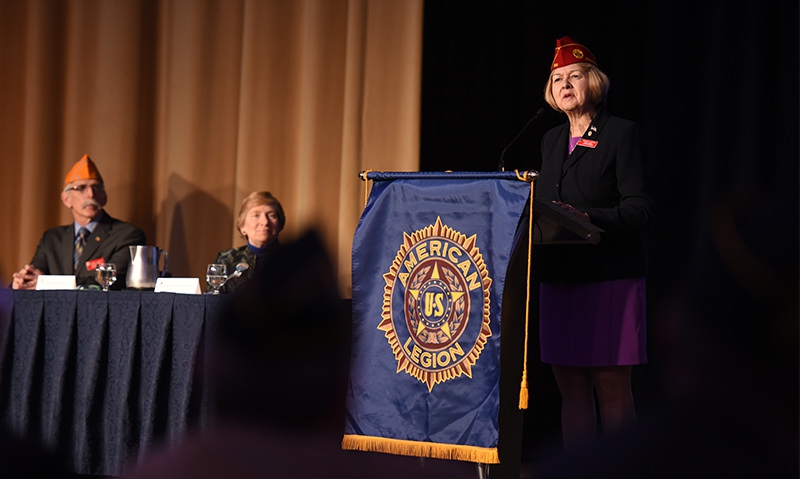 With Legion Family members just a few hours from heading to Capitol Hill to advocate on behalf of the nation’s veterans, American Legion National Commander Denise Rohan reminded them on past lobbying successes while bringing their attention to issues needing resolved by Congress.

In a packed ballroom during the Washington Conference’s Commander’s Call, Rohan pointed to VA accountability and appeals modernization that has passed from bill to law, as well as an enhanced GI Bill – all moved through Congress with strong urging from The American Legion.

“We now have a better GI Bill for servicemembers and their families – a benefit that now lasts forever and is named for the founder of the original bill – our very own Past National Commander Harry Colmery,” Rohan said. “The appeals process is finally being modernized, thanks to legislation signed by President Trump on the stage of our national convention in Reno (in 2017). This will speed up the process for hundreds of thousands of veterans.”

Rohan also noted the detention center at Guantanamo Bay staying open, which is consistent with a 2009 Legion resolution, as well as Congress passing the organization’s Commemorative Centennial Coin Act with a record number of cosponsors.

“These coins will raise significant funds for American Legion programs, in addition to increasing public awareness about our organization,” she said. “As soon as the coins are available, I am hoping that you will support and spread the word about purchasing these collectibles.”

But Rohan said Legionnaires now need to turn their focus to attempts to privatize the Department of Veterans. The Legion believes veterans should have access to care outside of VA, but only when necessary.

“Choice is an important legislative priority for The American Legion,” Rohan said. “But it must not be any choice for the veteran, but the right choice. Health-care providers should not be assigned based on who is willing to treat the veteran, but on who will provide the best care for the veteran. And as the customer, the veteran has a right to expect convenience, timeliness and professionalism.

“We still believe that more often than not, the right choice is within the VA Health Care System.”

The American Legion continues to support the eradication of terrorism, “which threatens our homeland and ways of life,” Rohan said. “We also are committed to serving the U.S. veterans who fight these wars, with the same devotion, professionalism and gratitude with which they have served us.”

Rohan said the Legion will continue to urge Congress to pass House Joint Resolution 61 and Senate Joint Resolution 46, so the American people can decide whether the U.S. flag is worthy of Constitutional protection.

And Rohan said Congress needs to be reminded that a third of the citizens of Puerto Rico, which includes a veterans population, are without power after Hurricane Maria tore through the island.

“I still can’t help but be inspired by the everyday Legionnaires that I run across in these places,” said Rohan, who traveled to Puerto Rico in January. “These veterans answered our country’s call when they put on their uniforms. Let us remind Congress that we need to answer their call as well.”