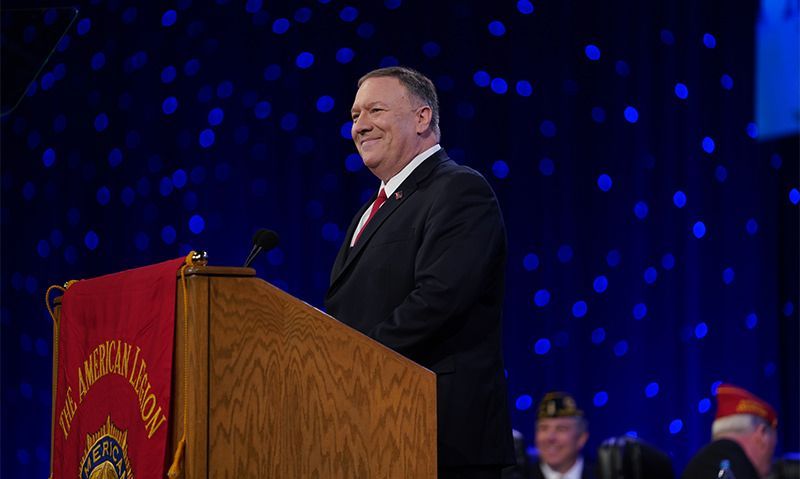 “To foster and perpetuate a 100-percent Americanism” is one of the missions stated in the Preamble to The American Legion Constitution. It also was the subject of much of U.S. Secretary of State Mike Pompeo’s address to the organization’s 101st National Convention on Aug. 27 in Indianapolis.

Pompeo – a U.S. Army veteran, former Central Intelligence Agency director and a member of Thomas Hopkins Post 4 in Wichita, Kan. – said Americanism starts internally and expands worldwide. “Americanism means recognizing that America is an exceptional nation,” he said. “We’re the first nation founded on an idea that government’s proper purpose is to protect unalienable rights for each and every human being. And Americanism means our love of individual liberty and human dignity sets us apart. It’s not that these principles are unique to us, but we’ve shown a singular determination and courage in realizing them.

"Americanism, in your founding and our founding, means pride in our recipe to create human flourishing – the rule of law, representative government, property rights. Things that we sometimes take for granted; as I travel around the world, I know that we should not. Americanism, too, means confidence in America’s unique role in the world. I see that as America’s most senior diplomat. It’s guided by our founders’ vision. So I’m honored to come before an audience that isn’t going to get squeamish when I tell you that Americanism is something we must be proud of each and every day."

Pompeo said Americanism is at the center of U.S. foreign policy. “At its core, it means honoring principles and returning to a foreign policy that had the vision of our founders at its very center,” he said. “George Washington had it right. He counseled us against ‘inveterate antipathies against particular nations, and passionate attachments’ to ‘others.’ He wanted us to look at the world dispassionately, for us to see it as it is, for what it really is.”

Pompeo noted that the U.S. has helped mobilize 54 other countries to support the Venezuelan people as they seek to restore democracy and prosperity to their country, as well as supporting the Iranian people in their struggle under a “brutal” regime.

“Americanism too means believing the right of people to choose their own leaders,” Pompeo said. “Americanism means getting leadership right around the world.”

• Working with 79 partners to bring down the ISIS Caliphate;

• Convening more than 60 countries in Warsaw earlier this year to brainstorm about the Middle East’s challenges;

• Galvanizing international support for sanctions on North Korea and Iran; and

• Joining with Australia and Bahrain in efforts to ensure freedom of the seas against Iranian aggression.

Pompeo referred to those actions as “taking care of our own,” which he said also includes the administration securing the return of 55 boxes of the remains of U.S. servicemembers from North Korea.

“I know the significance of this to you,” Pompeo said. “And the Trump Administration is committed to making sure every last American soldier buried on Korean soil comes home.”

Turning his focus to Afghanistan, Pompeo said the U.S.’s longest war ever – 18-plus years – has helped transform Afghan society. “And we crushed Al-Qaeda,” he said. “That was our mission. That we shall do, and that we shall continue to do. But the truth is, America has never sought a permanent military presence in Afghanistan, and all sides recognize that time moves on.

“So for a year, and continuing today, we continue work to a clear-eyed engagement with all Afghans. We don’t know how these efforts towards peace and reconciliation will end. But President Trump is committed to make sure that we get it right. His clear guidance to me and to my military colleagues is this: We want to get our folks home as fast and in as large numbers as we can, and we want to make sure that never again is terror struck on the United States from that soil.”

Pompeo also praised the Legion for its help in starting and then continuing to support the Boys Scouts, for lobbying for creating of what become the Department of Veterans Affairs, for helping draft the original GI Bill and then pushing for updates to it, and for its advocacy on behalf of veterans.

“It’s very simple: you have contributed mightily to proud American achievements. By doing so you, your organization, each of you as individuals, is a proud American achievement unto itself,” Pompeo said. “In fact, America itself – the idea of America and her promise – is at the core of everything that you do. Keep supporting our veterans who come home – helping them with their career, their family, their education or health needs, and so much more in the ways that you always have, and I know you will. There is, as we say in Kansas, ‘no place like home.’ Help them make sure they return properly …

“And finally, and I suggested this early, every society, especially ours … filled with so much greatness, it needs heroes. Tell young people your stories, and the stories of others who served alongside of you. Because the only way … that the next generation will be proud of Americanism is if we proudly teach it to them and we pass it along.”