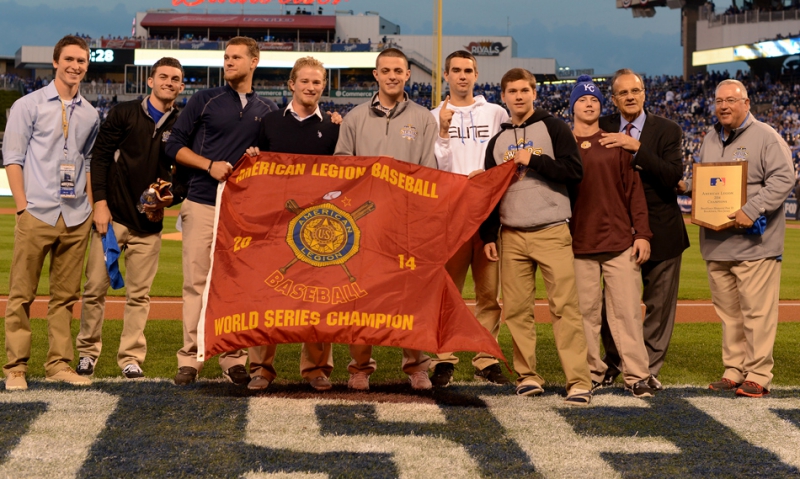 Barth was Brooklawn’s assistant head coach in 1991 when the team won its first Legion World Series crown. As head coach, he led the team to titles in 2001, 2013 and, most recently, last August – earning him and his team tickets to Games 1 and 2 of this year’s MLB World Series in Kansas City this week.

But the thrill never grows old for Barth, who now doubles as the head baseball coach for Rutgers University-Camden. Nor does he take it for granted.

“It’s a different experience every time,” said Barth, who also guided Brooklawn to six Legion World Series appearances as head coach. “We’ve been to four different places (each time), and they set up different trips for the kids – something to do with American history or baseball, or a combination of both. So it’s always really neat.”

Barth, his Brooklawn coaching staff and 17 of his players were honored on Kauffman Field Wednesday night before Game 2 of the World Series. They were presented a plaque by former New York Yankees Manager Joe Torre less than a half hour prior to Game 2’s first pitch.

Eight players from Brooklawn’s 2013 World Series team were back this year and already had taken in the MLB World Series experience. But Brooklawn’s Eric Becker was making his first trip to a World Series. “It’s everything you imagine and more,” he said. “It’s just unbelievable.”

Steve Mondile, who played on the past two Brooklawn World Series champs and now plays for Longwood University in Virginia, already had set foot on an MLB World Series field before Wednesday night. That didn’t matter.

“It’s (still) a once-in-a-lifetime opportunity, and I’m just so happy to be here with the guys,” Mondile said. “It’s my second time getting to do this, but it’s just unbelievable, and I can’t even explain it in words how awesome it is to go out on the field on such a big stage.”

Playing for Gloucester Catholic High School, where the majority of Brooklawn’s players come from, Mondile was a part of three state titles. But winning a Legion World Series is different.

“(Winning the Legion World Series) is a lot longer of a road,” Mondile said. “It’s almost that whole month and a half. You’re traveling a lot more. And I think it kind of means a little bit more. That’s a national thing, and you’re with (your teammates) longer. It says a lot more, I think, to win that (Legion) World Series).”

Ironically, the MLB World Series already had a hint of Brooklawn. Former Brooklawn player Casey Fahy is now a Kansas City scout, while John Barr, San Francisco’s vice president and assistant general manager, was a Brooklawn player in the 1970s.

“When you wear the (Brooklawn) shirt, there’s a history behind it,” Barth said. “We’ve won so many state titles. There’s a storied history, so to be a part of it, it feels like an honor, something special and something to live up to.”

Playing for The American Legion also means a bit more to the players. “You represent a post – people who fought in a war for us,” said Brooklawn’s Eric Grafton. “It’s an honor to be playing for them. When we step out on the field and we're called Brooklawn Legion Post 72, it’s representing a really good cause.”