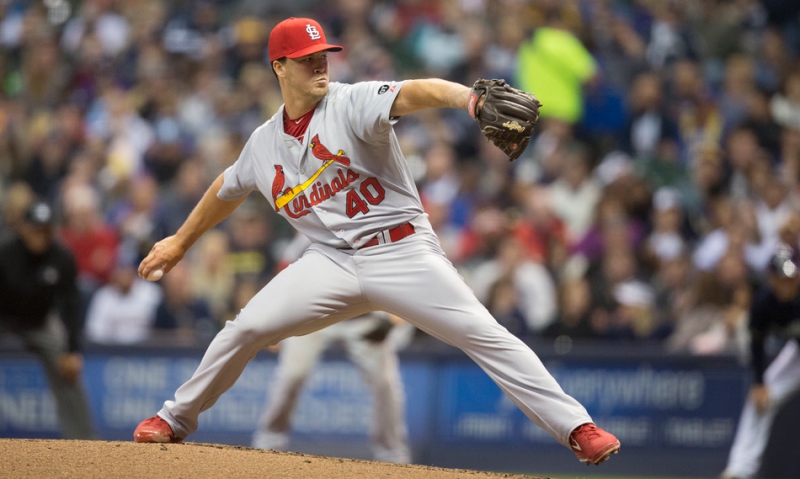 Mitch Harris was drafted by the St. Louis Cardinals in the 13th round of the 2008 amateur draft, but his dreams of pitching for a major league team were put on hold while he honorably served his country – a commitment he had to fulfill as a U.S. Naval Academy graduate. During his five years of service he never lost sight of his dream, which became a reality when the Cardinals called him up from their minor league Triple-A affiliate, the Memphis Redbirds, to pitch against the Milwaukee Brewers on April 25.

His Major League Baseball debut made him the first Naval Academy graduate to appear in the major leagues in 94 years and the second ever.

The right-hander from Belmont, N.C., spent his summer days playing Legion Baseball in Gastonia, N.C., before playing four years for the Navy Midshipmen. After graduating from the Naval Academy in 2008, Harris served as a weapons officer, combat information officer and a training officer, and ended his military career as a lieutenant.

The American Legion spoke with Harris about fulfilling his baseball dream while fulfilling a duty to his country.

Q: How did you end up playing baseball for the Navy Midshipmen?

A: I was throwing in the bullpen one day in high school (South Point High in Belmont) and the defensive coordinator from the Navy football team came by because he’s from the area and happened to see me throw in the bullpen. He started asking me questions and long story short, the Navy called me to see if I could visit. When they called back and said they wanted me to come play baseball for them, it was a no brainer for me.

Q: After being recruited by the Cardinals upon graduation from the academy, how did you stay positive knowing it would be five years before you could play?

A: It was tough. I had to tell myself that at some point there was going to be a chance for me to play, and I had to always be ready. The only part that I could control was the mental part so I told myself to stay positive and always be ready to play. Physically, I couldn’t necessarily stay in the best baseball shape; that part I couldn’t control. So I wanted to make sure I stayed positive knowing that someday I would have that chance, and I needed to be ready.

Q: Physically, how did you keep your arm in shape during service?

A: My first ship had a big enough flight deck to throw, but my second ship didn’t. Throwing was only a possibility when the seas were just right and the weather was perfect. It wasn’t like I could go out any day and throw.

Q: How did it make you feel that the Cardinals waited for you?

A: It was great that they were willing to wait knowing that I had an obligation to do. That meant a lot to me because every year in the draft they could have picked someone else to replace me. So I felt obligated to give them the best that I had.

Q: What was it like to finally wear a St. Louis Cardinals jersey?

A: It’s indescribable. It’s a dream come true. A journey that’s finally been fulfilled. A moment I’ll never forget just knowing that the pain, the sweat, and tears that I went through of not knowing if I would ever get back to where I wanted to be. It all came together when I was able to run out there and make my debut.

Q: What has serving your country and playing professional baseball taught you?

A: Discipline. In the military you have to have discipline; every day you have a duty that you have to do, and it’s the same with baseball I was able to put that discipline into my work ethic knowing that the more hard work I put in the better outcome it will be.

Q: Can you share a favorite moment about your military service?

A: I think a lot of the times that meant most to me were moments that my guys re-enlisted, and they chose me to conduct their ceremony. They purposely chose me because they said, ‘Sir, when you make it someday (in the majors), I want to be able to say that you did my re-enlistment.’ It really meant a lot to me to be a part of their life and a part of something that really impacted them. Times like that pushed me on days that were tough. Days that were, ‘I don’t know if I’m ever going to be able to do this (play baseball professionally).’ I would think about my guys and how they were pushing for me and knew I could do it. It’s been cool to have some of those guys come out to games and love how far I’ve gotten and what I’ve achieved.

Q: What do you remember about your days playing Legion Baseball?

A: Legion Baseball was my first experience of summer ball. When you talk about summer ball to me that’s what it was; everyone played Legion ball, and we had a strong Legion team. We had a good group of guys. It was the first time for most guys to use a wooden bat. That was impressive to finally experience that; it was a totally different game with a wood bat. It was a great experience, and I always loved going out and playing in front of big crowds that Legion provided.

Q: What advice do you have for servicemembers who have dreams they want to fulfill?

A: Not everybody joins the military to make it a career. A lot of people join to either further their career, further their education, or they have a different dream they want to pursue. Whatever it was, we always told our guys to pursue that dream. First and foremost you want to be the best sailor you can be because that’s the part you’re doing right now. But eventually do whatever it is that you have that goal and dream of doing. Nothing can stop you from doing that. A lot of times the military can help you get there. So we told our guys to keep pushing and keep driving for whatever that is that they want to do.

Q: What's it like to have served your country and now fulfill a lifelong dream?

A: I have the best of both worlds. I’ve gotten to do something that a lot of people like to do, which is serve their country, and then I got to fulfill a dream that a lot of kids have who grow up playing sports. I was very blessed to be able to do both.