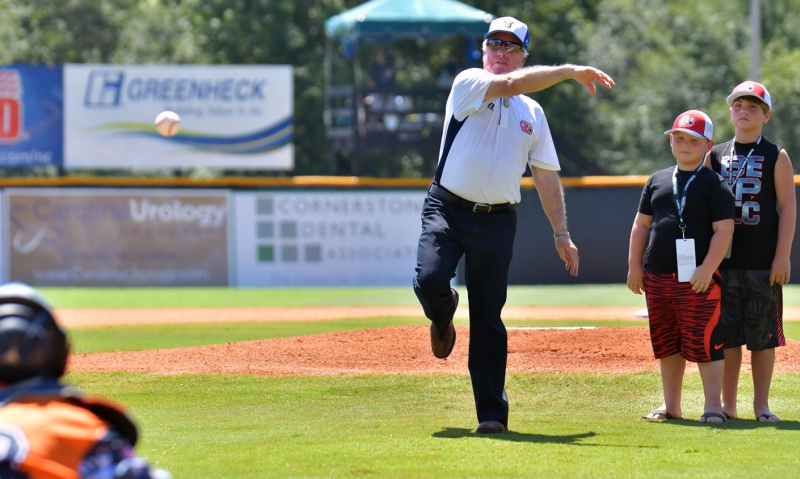 Fourteen years before then-Army First Lt. James Taylor was earning the Medal of Honor, he was a multi-position player on the Arcata, Calif., Post 274 American Legion Baseball team.

Memories from his Legion Baseball days are still with Taylor, who came to Shelby, N.C., to throw out the first pitch before the North Carolina-Washington American Legion World Series game Sunday.

“I had a wonderful coach, Bill Rice,” Taylor said. “Bill was the type of the guy – he took a group of young men, and his goals were to make sure that not only did they understand the game of business, but along with that he built character, discipline and the desire to be a good person. He loved each one of us dearly.”

With just 14 players on the roster, Taylor and his teammates were forced to play multiple positions; he played shortstop, third base and outfield. But Taylor’s teams were successful – one season the team got 22-0 before losing in the California state tournament. But it wasn’t just about wins and losses for Post 274.

“(Rice) would discipline us if we missed a call or something,” said Taylor, who is a lifetime member of Post 274. “But they taught me the same philosophy: The only time you see a loser is on the scoreboard. But the ball players are all winners. If you lost the game, you still maintained your self-composure and you’re still a winner."

Taylor made it a point to stop by the San Mateo dugout this week to talk with the California squad. “They said, ‘Oh, you played in Yountville (the home of the California state tournament),” he said. “And I said, ‘yeah, and not only did I play in Yountville, I was one of the guys that opened up Yountville.'”

Taylor also shared with the San Mateo players that while baseball is important, it’s not the end-all. “I just tried to relay to them that baseball is … only a game, and life is forever,” he said. “And when they leave (and), take their uniforms off, remember the sacrifices that people made for them to be a free person. Remember that you can do anything that you want to do. And remember: the team first and the individual second.”