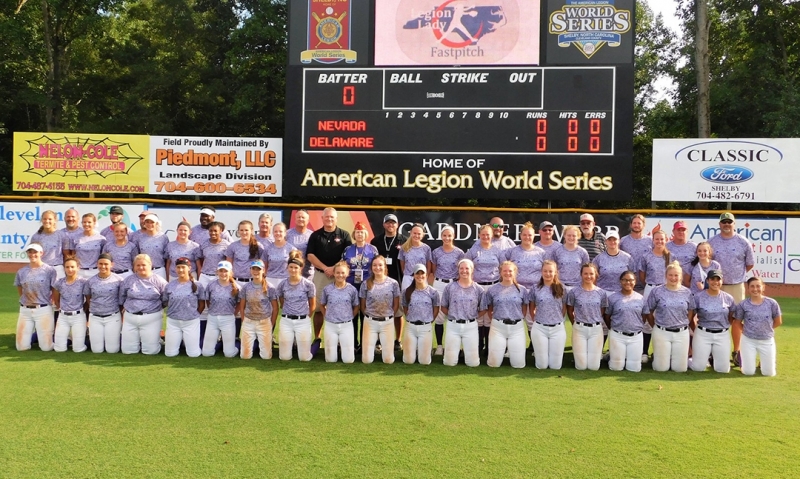 As Major League Baseball and USA Baseball support the Play Ball initiative to get more boys and girls playing bat-and-ball sports, The American Legion Department of North Carolina decided to capitalize on the success of hosting the American Legion World Series by getting more young people on the diamond.

Prior to the 2018 season, the department became the first in the nation to sanction a statewide American Legion softball league: North Carolina American Legion Lady Fastpitch.

Mike Hasson, state chairman for softball and member of the department's Baseball Committee, led the way in the creation of the league in 2017.

“I had a vision a few years ago as my daughter was growing up that it would be nice to have a place for girls to play competitive softball outside of high school and travel ball,” Hasson said. “I took it to The American Legion in North Carolina and they wanted it to be veteran-led and that is where I came in as I am a veteran, as are my son and sister.”

In 2017, North Carolina American Legion Lady Fastpitch featured 11 teams in a provisional season to test the viability of the program.

Following the success of the season, Hasson sought approval from the department’s baseball committee, Americanism commission and executive board. With approval from all of those entities, North Carolina American Legion Lady Fastpitch grew to 24 teams this year, with 18 competing in the senior division and six in the junior division. The league hosted 572 games this year leading to a state tournament in Morganton.

Following the conclusion of the season, three dozen players from across the state participated in the Commanders Cup All-Star Battle in Shelby prior to the championship game of the 2018 American Legion World Series.

Denise Rohan, then national commander of The American Legion, was on hand for a luncheon pregame and for the contest, offering her support for the program.

This September, Hasson had the opportunity to present to the department baseball chairmen and The American Legion’s Baseball Committee in September to help any interested departments support softball.

“We appreciate the support of all of the people who have been involved in this at the local, state and national level,” Hasson said. “We wanted to be an American Legion program because of the reputation, honor and patriotism involved in the program.”

“This is low-cost, very competitive, it brings the girls within your local community together and it gets your community involved,” Hasson told the group. “This puts community back into fast-pitch softball.”

“We are going to continue to grow and are looking at having 30 to 40 teams next year.”

Hasson can be reached by email at legionladyfastpitch@gmail.com.

Those interested in bringing softball to their state are encouraged to reach out to their department’s leadership.