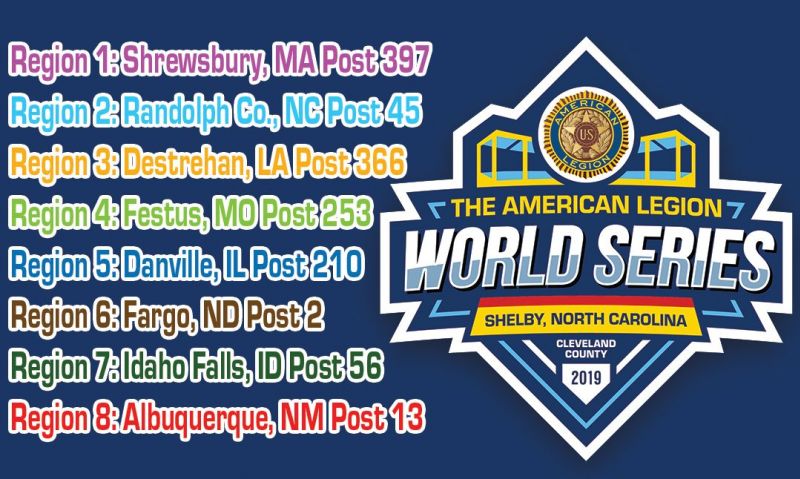 In one of the most competitive regional rounds in American Legion Baseball’s history, all eight regions required the maximum 15 games to determine a champion.

Eight teams have emerged as regional victors and will move on to the American Legion World Series in Shelby, N.C., which starts on Thursday, Aug. 15, and runs through Championship Tuesday on Aug. 20.

All games are also available online at espn.com/watch.

For coverage of the American Legion World Series visit https://americanlegion.sportngin.com/2019alws.

Here is a look at the eight finalists and how they earned their tickets to Shelby.

For the third straight year, a team from Massachusetts will represent the Northeast region at the American Legion World Series and for the second time in three years that team will be Shrewsbury.

The hosts had two cracks at in-state rival Lawrence, needing to just win one of the two games Sunday to advance. Lawrence made sure they needed both games. A four-run outburst in the third inning from Lawrence provided all the offense the team needed in a 4-3 win to force a Game 15.

The winner-take-all game was also well pitched, but Lawrence got on the board in the bottom of the first and carried that 1-0 lead to the sixth. Shrewsbury took advantage in the sixth, going single, sacrifice, single, double, wild pitch and sac fly to take a 3-1 lead. The hosts shut the door on Lawrence, retiring all six batters in the following two innings after allowing only three hits all game.

New region, same result for Randolph County Post 45. After going to back-to-back American Legion World Series in their home state in 2017 and 2018, redistricting moved Randolph to Region 2, where they had their hands full.

A loss Thursday against Vienna (Va.) Post 180 meant Randolph needed to get through Delaware and West Virginia and then beat Vienna twice on Sunday to advance. With half that task done entering Sunday, Randolph’s pitching ensured the other half would be completed, as well.

Trevor Marsh pitched a gem in the opener, throwing a very efficient complete game, two-hit shutout in a 3-0 victory to force a Game 15. Marsh also contributed on the offensive side, scoring the first run of the game after doubling in the first and adding an insurance run on a solo homer later.

In Game 15 Randolph scored three in the top of the fourth to break a scoreless deadlock and held off a Vienna charge which left the tying run on third base.

The New Orleans area has a storied history with American Legion Baseball. The metropolitan New Orleans area has played a record 75 American Legion World Series games, posting a record of 43-31-1 in 18 appearances. Destrehan, a program in its fourth year, will add to that total as the Post 366 Pedal Valves Cardinals brought home Louisiana’s fifth regional crown in the last eight years. Destrehan will make its first ALWS appearance after going 0-2 in the Mid-South regional tournament in 2016 and reaching the semifinal the following year. After missing the Mid-South regional last year, Post 366 will make the World Series in Louisiana’s first year in the newly-realigned Southeast region.

Region 3 required all 15 games with Tupelo (Miss) 49ers defeating Troy (Ala.) Post 70, 4-2, in the first game Sunday. Tupelo scored three in the first and one in the third and never looked back to advance to a rematch of Friday’s 13-4 loss to Destrehan.

The title game played out almost exactly the same way as Game 14 but Tupelo was on the other side as Destrehan also scored three in the first and later added an insurance run. Tupelo, like Troy in the morning, rallied for two runs to make the game close but, also like Troy, it was not enough in the 4-2 final. The last out was a flyout with the tying run at the plate.

Bryant took a 1-0 lead but conceded runs in the fourth and fifth. A sixth inning small ball rally got two runs across for Bryant, seeking a return to the American Legion World Series, and ended the Hastings season.

Waiting for Bryant was Festus, a team that had three wins of two runs or less, including a 2-1 win over Bryant on Thursday. Bryant got off to a fast start, scoring two in the bottom of the first inning to take an early lead. Festus halved the lead, but still trailed heading into the fifth. The first five Festus players reached base and the floodgates opened for six runs, priming the team for an 8-3 win.

Festus returns to the American Legion World Series for the first time since 2009 in Fargo, the penultimate World Series to be played at rotating sites.

Beverly/Lowell (Ohio) Post 387/750 looked like the team to beat with four straight wins with an average of 12 runs per game, including a 16-15 thriller over Danville on Friday. Danville got revenge for that loss with two straight wins to earn the program’s first-ever trip to the American Legion World Series and the state’s first trip since Moline in 2012.

In the first game of the day, Beverly/Lowell got out to a quick 4-0 lead after two innings but Danville's bats exploded from then on, posting innings of two, two, three, two and five to end the game, allowing just two more in the 14-6 win.

The rubber match between the two teams was unlike the first two as pitchers had control. The game bounced back and forth and was tied at 1-1, 2-2 and, after an Ohio seventh-inning rally, 3-3. In the bottom of the seventh, Danville loaded the bases and Trevor Davis sharply hit a grounder to third. A diving play by Kurt Taylor and a race to the bag ensued, but Chase Vinson got to third just in time, allowing Chase Rademacher to score the walk-off winner and send Danville to Shelby.

Fargo entered Sunday needing to beat an Excelsior (Minn.) Post 259 team that it lost to, 17-11, on opening day and had only allowed three runs in three games since that Fargo victory.

Fargo made that seemingly difficult task look easy in the first game of the day, scoring in five of the seven innings and keeping Excelsior off the scoreboard entirely in an 8-0 victory to force a Game 15.

Game 15 was an exciting game worthy of naming a champion. Fargo struck first with runs in the first two innings to take a 2-0 lead which it held until the fourth inning. Excelsior scored in the fourth and tied it up in the fifth, 2-2. Jonas Sanders pitched well and Austin Manuel came on in relief with 2.1 scoreless innings to shut down Excelsior after that. Fargo got the game-winner in the bottom of the sixth on a sacrifice fly and Manuel stranded the tying run in the seventh to end it.

In the first game of the day, Idaho Falls sent its ace, Randon Hostert, to the mound looking to keep the momentum going from his first start of the regionals, where he struck out 10 in five dominating, no hit innings against Wyoming. On Sunday, Kennewick, Wash., Post 34 couldn’t find an answer to Hostert either, as the Utah commit pitched another no hitter, this time striking out nine and only allowing two baserunners. It is the first time in recorded history that a pitcher threw consecutive no hitters in national tournament play.

In the final game of the tournament, it was a low scoring contest but both teams had plenty of opportunities. Bozeman (Mont.) Post 14 broke through with a run in the bottom of the second but Idaho Falls quickly responded. While those were the only two runs in the first nine innings of the contest, a runner reached base in 16 of the game’s 20 half-innings and the teams combined to strand nearly 30 runners in the contest. That trend ended with the first pitch of the tenth inning as Tavyn Lords of Idaho Falls did it all himself with a solo shot to right-center. After a pair of hits, Alex Cortez followed with a two-run triple to give Idaho some breathing room and came around to score on a single, giving the game its final 5-1 result.

With the win, it marks the third straight year that an Idaho team won the Northwest region, with three different squads doing so (Lewiston and Meridian the others). With the loss, Bozeman came up just short of becoming the first Montana team since 1962 to make the American Legion World Series. Billings won the first three Region 7 titles (1960-62) and the state has not been back since.

What a wild ride it has been for Albuquerque out west. Coming off of a loss on opening day, the New Mexico based team needed to be perfect the rest of the way. Overcoming a lot of adversity, they ultimately triumphed and will represent Region 8.

On Thursday, a six-run rally helped the team overcome a four-run deficit to stay alive. On Friday, Roy Lee Jennings went 4-for-4 including a walk-off winner to eek past Fairfield to once again stay alive. Albuquerque fell behind 6-2 against Henderson (Nev.) on Saturday, but rallied for a wild 12-8 win on Saturday.

That led the team into Sunday needing two wins and their first one might’ve been their most impressive escape act yet. Against Petaluma (Calif.) Post 28, New Mexico trailed, 3-2, heading into the bottom of the sixth and got two runs to take the lead. Petaluma responded with two of their own, once again putting New Mexico's back against the wall. Once again, they responded. Two more in the bottom of the seventh forced New Mexico into a Game 15 for the regional title.

Honolulu Post 35 awaited New Mexico in the final, but Albuquerque got a rare early lead. Honolulu rebounded to tie the game at 3-3 heading to the bottom of the sixth, where Albuquerque worked their magic once again. Two players got hit by pitches and Ricky Apodaca cleared the bases with a double, giving Albuquerque the only runs they needed to seal the magical run.