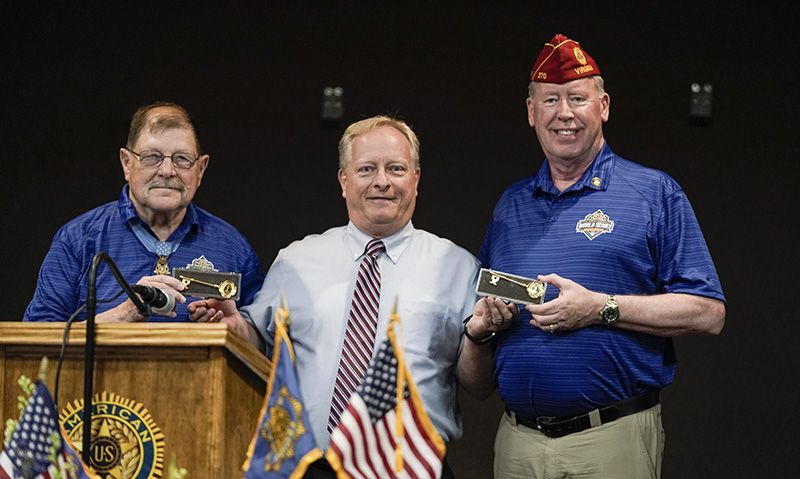 For the second year, Post 155 hosted a gathering allowing the eight ALWS teams to hear from a Medal of Honor recipient and the national commander of The American Legion.

This year’s guest, Hal Fritz, received the Medal of Honor for his acts of bravery during an ambush in the Vietnam War.

He started by discussing the word “hero” and saying, “When comforted with danger they affect that danger positively. Every man and woman in here who has served in the U.S. military is a hero because they faced situations like that and they embraced it and they saved lives. It’s not just something a Medal of Honor displays, every veteran that has served has displayed that courage and that valor.”

A 50-year member of Post 24 in Wisconsin, Fritz was very positive about his time with The American Legion.

He also added some encouragement for the players as they go through the World Series and continue on into adulthood, saying, “It wasn’t just me who received the Medal of Honor, it was the team of soldiers I had with me. And when you’re out on that field, it’s not just you, it’s the team together that makes a difference. And I saw that when I watched you play yesterday. That’s what you want to maintain. Bring that attitude to everything you do and you will be great.

“We are particularly proud of our youth programs and our Americanism programs. The one thing that these programs do for us is that it brings us into contact with people like yourselves and we have the opportunity to spend time with boys and girls of your caliber and it gives us reason to believe that there are people out there who will continue to make our country a great country. We are looking forward to your generation becoming leaders. That’s why The American Legion likes to instill in these programs things like good citizenship and sportsmanship.”

Mayor Neisler presented both with keys to the city, as well.