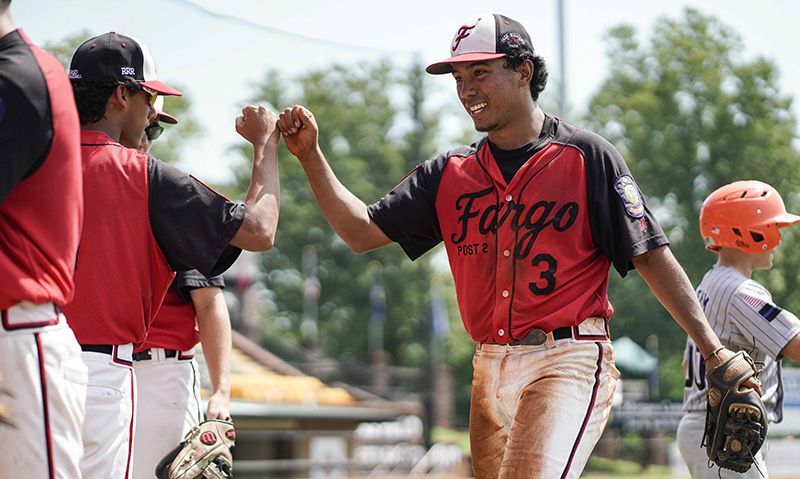 Brandt Kolpack of Fargo, N.D., Post 2 fist bumps his teammates after the final out of Game 11 of the 2019 American Legion World Series on Monday, Aug. 19, 2019 at Veterans Field at Keeter Stadium in Shelby, N.C. Photo by Ryan Young/The American Legion

Colton Frey started for North Dakota and pitched 2.1 innings, allowing two walks and an unearned run on Sunday before the rain came. Zach Sandy took over on Monday and allowed only one hit, taking a combined no hitter into the seventh inning, before closing it out.

Both teams went hitless in the first inning Sunday but North Dakota had a huge inning in the second to score five runs and take command early.

Blake Anderson hit a single and moved to second on a sacrifice bunt. Brandt Kolpack forced a difficult play on a hard-hit ball up the middle and legged out a hit and forced an error which scored Anderson and sent Kolpack to third. Drew Sandy, Chandler Ibach and Zach Sandy all hit singles and Zach Kluver cleared the bases with a two-run double to make the margin 5-0.

Fargo stranded runners on first and third in the third, failing to add to their lead. Shrewsbury got one back in the bottom of the third in an odd inning with a walk, error, pickoff, hit by pitch and another error bringing a run home.

At 5:13 p.m., lightning in the area forced the tournament’s first weather delay just as Massachusetts got some momentum, ultimately leading to the game’s suspension.

On Monday at 11 a.m., the game resumed with a new pitcher, some new uniforms and the momentum went back to Fargo.

It only took two pitches for Fargo to get out of the third inning, including a pickoff at second by Sandy, and immediately made Massachusetts pay in the top of the fourth.

The pitcher battled from an 0-2 count to walk and Cole Hage followed with a single. On an 0-1 count, Blake Anderson launched an 0-1 pitch over the left field wall to make the lead 8-1.

“Getting that guy picked off right away was huge,” Anderson said. “That momentum build was incredible.”

Zach Sandy helped his own cause again, as he singled in Brandt Kolpack in the seventh to add an insurance run.

The combined no-hit bit lasted until the seventh but a grounder through the left side ended the opportunity.

With the win, Fargo stays alive in the Stripes pool. Post 2 will advance to the semifinals with an Idaho win over North Carolina in Game 12 or a would be in a three-way tie for the two top seeds with a North Carolina win. The two teams with the fewest runs allowed in the tournament will advance.

“We are the first team in Post 2 history to win two games at the World Series,” Anderson said. “It’s incredible.”