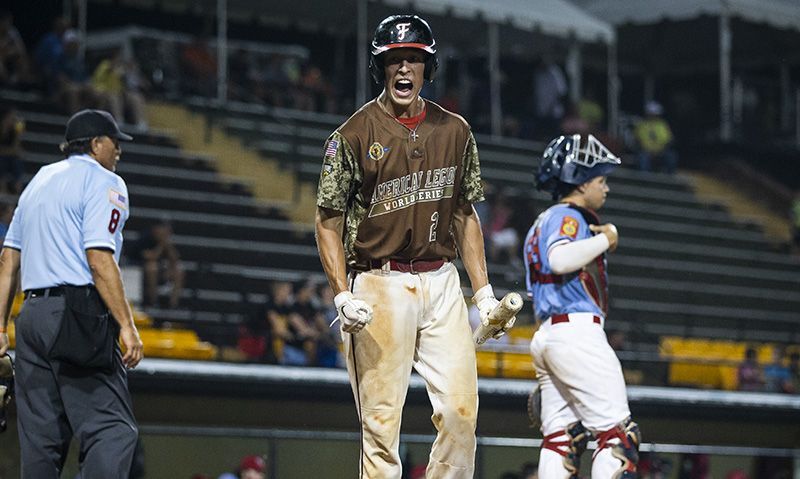 Fargo, N.D., Post 2 will be the first team from the state of North Dakota to ever play in the American Legion World Series championship game after defeating Destrehan, La., Post 366 in the first national semifinal of 2019.

Fargo, N.D., Post 2 woke up Monday with a 1-1 record in pool play, fighting desperately for a spot to advance. A win in the suspended Game 11, a favorable result in Game 12 to seal a runner-up spot in the Stripes pool and an 11-4 win in the Game 13 puts Fargo into Tuesday’s national title game at 6:30 p.m., on ESPNews.

North Dakota got hits from eight of its starters in the balanced effort.

In the top of the first, Zach Sandy was hit by a pitch and Zach Kluvers hit a double to send him to third. A wild pitch and a single by Cole Hage brought both home. Fargo loaded the bases with a pair of singles, but second baseman Gavin Freeman made a fantastic stop to keep the ball in the infield to prevent a run. One pitch later, Josh MacCord induced a double play to end the threat.

In the bottom of the third, the rain came for the second time in as many days with Fargo on the field. The delay was just under three-and-a-half hours.

Fargo got two quick outs in the bottom of the third but Louisiana got singles from TJ Thomas and Gavin Freeman and a walk to Nick Lorio to load the bases. Cory Cook dropped a looping single to left-center to bring home two and tie the game. Destrehan had multiple near-misses down the left field line including two hard-hit balls destined for the corner that just fell foul.

Fargo had its own two-out rally in the top of the fourth with two outs surrounding a walk to Chandler Ibach. Zach Sandy doubled and third base coach Lucas Rustad wisely held up Ibach at the last second to set up runners on second and third with two outs. Kluvers, Cole Hage, Blake Anderson and Brayden Koenig all hit the ball hard on the ground to reach base in consecutive plate appearances to bring home three more runs and make the score 6-2.

North Dakota added two more to their lead in the fifth when a Kluvers double down the left field line fell just between the line and a diving defender, scoring Caden Headlee and Zach Sandy.

In the bottom of the fifth, the first four batters walked for Louisiana to bring a run home, but two big outs by Austin Manuel nearly stymied the threat. Ron Franklin had a clutch single to bring one more home to make the lead 8-4 before Manuel worked out of the threat.

With a runner on first in the top of the sixth, Brandt Kolpack ripped a double, Drew Sandy walked and Ibach skied a ball over the retreating right fielder to bring home two more Fargo runs. A wild pitch brought home another run, giving the game its final score of 11-4.

“It was a total team effort,” said Kluvers, who was 4-for-4 with two runs and three runs batted in. “We wanted to get this win and get to the championship game.”

“I just felt they were just playing baseball,” coach Lucas Rustad said of North Dakota’s long day. “They were confident. We just played solid baseball. Today was just really good approaches and we didn’t chase many pitches outside of the zone. When we got pitches we did a good job finding holes.”

Destrehan, in its fourth year as a program and first appearance at the American Legion World Series, went 3-0 in pool play to win the Stars division.

“It means a lot to me," Rustad said. "This is this program’s fourth trip to the World Series and not a lot of programs have had the privilege to be here. I expect our kids to play a good hard-nosed game and exceptional baseball.”

“It’s a blast," Kluvers added. "There have been so many teams through North Dakota’s history and to be the first team to make it [to the national championship game] is incredible.”