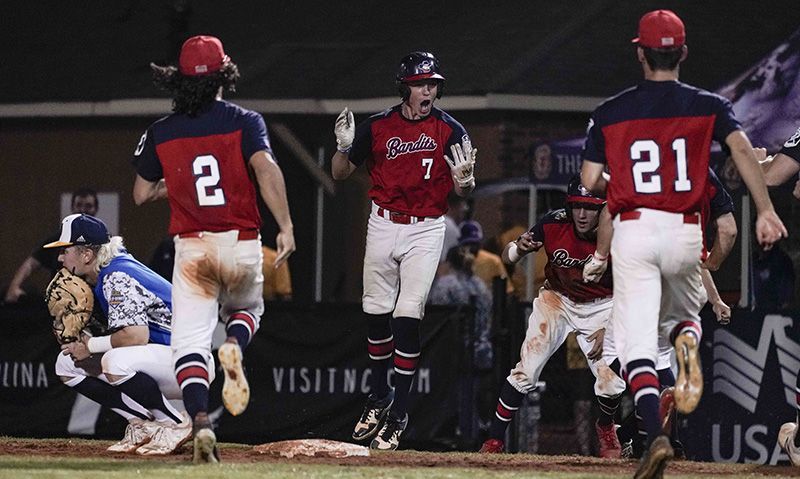 We are guaranteed a first-time national champion at the American Legion World Series as Idaho, represented by Idaho Falls Post 56, walked off as 4-3 winners in the ninth inning, besting Danville, Ill., Post 210.

Idaho will face North Dakota, represented by Fargo Post 2, in Tuesday’s final, which airs live on ESPNews at 6:30 p.m., and reairs on ESPNU following the conclusion of the game on ESPNews.

Idaho scored three runs on just one hit in regulation play and got their only other hit in the ninth inning to eventually walk off as winners.

It was Danville that had the upper hand early as Ernest Plummer walked and went to third on an error before coming around to score on a Kotah Broeker single in the first.

Danville got two runners on in both the second and third, but Austin Charboneau got a big strikeout to get out of trouble in the second and Caden Christensen came on in relief to end the third with a groundout.

Idaho loaded the bases with two out in strange fashion in the third. A dropped third strike, a steal on a pickoff attempt, a walk and a hit by pitch filled the bags for Randon Hostert. The first baseman fell behind in the count 1-2, but a wild pitch tied the game and two pitches later Hostert drilled a double to left field, scoring two for the team’s first hit of the game.

Danville nearly got a run back in the top of the fourth when Lucas Hofer pulled a ball down the right field line and hit the top of the wall but just foul. Hofer struck out two pitches later but a wild pitch allowed him to reach after a walk put two on with just one out, Christensen got a strikeout and groundout to hold the lead.

In the fifth, just at the stroke of midnight, Tavyn Lords made a key diving catch down the left field line for Idaho, sending his hat, sunglasses and hair flying in the process.

Down to the last out in the seventh, Danville rallied to get two crucial runs. Two singles and a walk loaded the bases and Logan Spicer fell behind 0-2 in the count but battled before lining a single into left-center, bringing home two and tying the game.

In the bottom of the frame, Mason Ecker battled and got a huge strikeout with his 105th and final pitch, finishing the game with just one hit allowed in 6.2 innings pitched, striking out eight. Dalton Dalbey came on in relief and closed out the inning, sending the game to extra innings.

In the eighth, Danville got a one-out single from Jake Stipp into right center and moved Stipp into scoring position with a bunt. Bruer Webster made a tough play sticking with a hard grounder just in time to second to finish the inning.

In the bottom of the ninth Idaho got its second hit of the game and it was a key one. Andrew Gregersen singled and stole second, then advanced to third on a fielders choice.ALWS Game 14: Idaho walks off in extras to secure title game berth

“It’s surreal,” Gregerson said. “We have a great group of guys I have been playing with since I was eight and I’m just soaking up our last games together.”

“[Christensen] has been pitching great all year and [Charboneau] started us off and gave us a chance to win and that is all you can ask of your pitchers,” Gregerson added.

Idaho Falls joins Lewiston and Pocatello as the only teams from Idaho to reach the American Legion World Series title game.

“This whole year this team has been checking boxes,” manager Ryan Alexander said. “It is the winningest team in Idaho Falls Bandits history, the first team to win a regional and now we have a chance to be the first to win a World Series.”

Idaho Falls will hope to fare better than their other Idaho counterparts. Pocatello lost, 23-6, in the first-ever World Series in 1926 against Yonkers, N.Y., in Philadelphia. Lewiston Post 13 dropped a 5-2 decision to Brooklawn, N.J., in 2001 in Yakima, Wash.

“We want to go down in the record books with our group of guys,” Gregerson said.

“These kids have worked hard,” Alexander said. “We have played a lot of baseball and these kids have had to grind and grind. We have gone from Denver to Arizona to San Diego to Shelby. We have traveled over 14,000 miles this summer and they have worked hard and they deserve the right to compete for the national title. But we are going to have to play good baseball to get it done.”