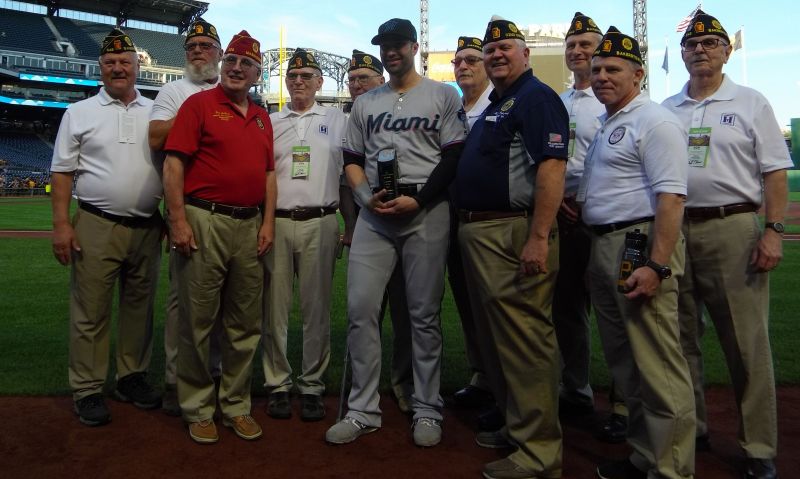 Neil Walker might not be a Pirate anymore, but Pittsburgh welcomed him home on Tuesday night to receive a prestigious award.

The Gibsonia, Pa., native and longtime Pittsburgh Pirate was honored prior to the game as the 2019 American Legion Baseball Graduate of the Year.

The award, first presented in 1958, honors a former American Legion Baseball player annually who is currently playing in the Major Leagues for his character, leadership, playing abilities and community service. Individuals are recommended by their respective post.

Walker received the award during a pregame ceremony Tuesday with Francis MacDonald, national vice commander of The American Legion, and was joined by his wife Niki, daughter Nora and parents Tom and Carolyn, as well as members of American Legion Post 548. To watch video of the ceremony, click here.

Previous award recipients include famed legends such as Ted Williams, Stan Musial, Brooks Robinson, Greg Maddux and Tony Gwynn, current stars such as Justin Verlander and Albert Pujols and even Walker's current manager, Don Mattingly, who won the award in 1987.

“It was an honor to receive this award and all it stands for,” Mattingly said of his honor. “And it great to be on the same list as a guy like Neil who has been such a leader of our young players in the clubhouse.”

Walker, formerly of American Legion Post 548 in Gibsonia, Pa., was honored for his work in the community in the Pittsburgh area.

Among his many contributions, Walker frequently is involved with the Children's Hospital of Pittsburgh, veterans’ causes and homeless shelters in the area. Additionally, he and his wife are involved in the Animal Friends Shelter. Walker is a vice president of a group called "Clint Play Ball Fund" that brings baseball to underprivileged programs in Charleston, S.C., and Western Pennsylvania.

Despite being a member of the Miami Marlins now, Walker, who played in Pittsburgh for seven seasons, saw an opportunity to be recognized in his home community and the Pirates staff happily offered to host the ceremony.

“Pittsburgh is the town where I grew up learning sports, particularly the game of baseball,” Walker told the Pittsburgh Tribune-Review. “The Pirates were the organization that gave me my first opportunity, so it only feels natural to have it be there.”

“I’ve seen the list before, and it’s humbling,” Walker continued. “American Legion Baseball is such a good program for teaching kids the right way to play and learning valuable lessons through the veteran's program. I was really excited to know that I was a part of the list.”

Walker’s father, Tom, is a former Major Leaguer, a Vietnam-era private first class, an American Legion member and was an assistant coach on Neil’s American Legion team growing up.

That team’s manager, Bob Schleiden, is now the post commander and nominated Walker for the award.

“For American Legion members, we’re all veterans and Neil now represents, to us, all the qualities and expectations that we have for each other as veterans,” Schleiden told the Tribune-Review. “We hold each other to a higher standard because of our love of country and each other, and we consider each other family. Neil now represents that, and he is the essence of that on the field. So he carries a little extra visibility for us now, and we are extremely proud that he is the one that represents us.”