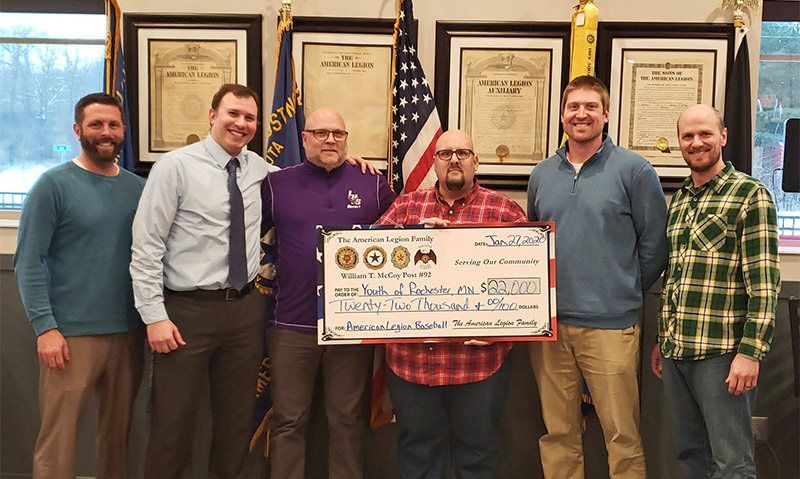 For years, WM. T. McCoy Post 92 in Rochester, Minn., has been a staunch supporter of American Legion Baseball. The post is a longtime sponsor of the Rochester A's, who won the 2003 American Legion World Series, and for nine years has sponsored the Firecracker Post 92 Legion Tournament.

But for at least a decade, that support has grown considerably. A recent $22,000 donation to local baseball teams brings Post 92’s total to more than $200,000 in the past 10 or so years alone.

Roger Vangess, a member of Post 92 for more than 50 years, said the post had been giving the Rochester A's $10,000 “for years.” But as American Legion Baseball grew in the area, the post wanted to expand its generosity.

This year, the post has awarded $5,000 each to all four American Legion Baseball teams in Rochester: the A's, the Lourdes, the Patriots and the Redhawks. Another $2,000 was donated to the Rochester Youth Baseball Association, with $1,000 of that set aside to help underprivileged youth with registration fees.

“We’ve got older fellas in here that just love baseball,” Vangess said. “We started donating (to Legion Baseball), and we just kept doing it. We figured it was a good way to help out the community.”

Vangess said the local baseball managers are very appreciative of the support, but one manager’s reaction in particular – longtime A's manager Keith Kangas, who passed away in 2019 – has really stood out to him.

Bangess said the A's were practicing on a field near an office Vangess was leaving. “(Kangas) yelled my name out and came all the way across from center field, which was quite a ways from where I was at,” Vangess said. “He came up to me, and he just wanted to shake my hand and thank (Post 92) for all the work we’d done for him. I’ve never forgotten that. It meant a lot to me.”