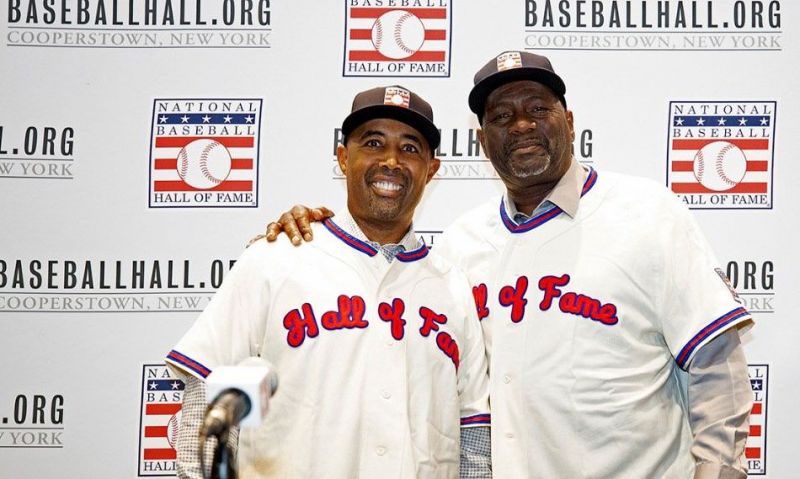 While playing American Legion Baseball was the first step toward Lee Smith eventually entering the Baseball Hall of Fame, he wasn’t always able to get on the field while growing up in Louisiana.

In a trip back to the field where he played Legion Baseball, in the summer of 2019 before his induction into the Hall of Fame, Smith recalled not being allowed to play at some schools because of his skin color.

Still, in later years after he became a star in the major leagues, “Every one of the schools, I made it my point to go back. Those things that happened back in the day, you got to let it go,” Smith said.

And Smith said that those who played alongside him became more than teammates. “It became a family,” he said.

In June 2019, Smith and Harold Baines became the 13th and 14th black Legion Baseball alumni to enter the Baseball Hall of Fame in Cooperstown, N.Y. Baines, like Smith, credited playing Legion Baseball with honing his skills. Baines told the Baltimore Sun, “You always have somebody good in a small town like I grew up in, but when you get to the other competition, it’s different. When I played American Legion, it was tougher.”

The 14 black Legion Baseball alumni in the Baseball Hall of Fame:

A 1969 Hall of Famer, Campanella played American Legion Baseball in Philadelphia before dropping out of high school on his 16th birthday to play professional baseball. The catcher starred for the Brooklyn Dodgers, won a World Series and earned three MVP awards. Known for his record-setting bat and throwing arm, he was named to eight straight All-Star teams.

Gibson was the World Series Most Valuable Player in each of the Cardinals' two titles during his tenure. The nine-time All-Star added two Cy Young Awards to his resume. He is a member of the MLB All-Century team and was inducted into the Hall of Fame on his first ballot in 1981.

A two-time World Champion, Robinson is the only player to win MVP in both leagues. The Hall of Famer also won the triple crown before becoming the first African-American manager in MLB history. He was the 1966 Graduate of the Year and the 14-time All-Star had his number retired by the Reds, Orioles and Indians and is a member of each of those teams' Halls of Fame. He played for Bill Erwin Post 237 in California.

A first ballot Hall of Famer, Stargell earned seven All-Star Game trips in his career with the Pirates. Eight years after winning his first World Series, Stargell put together his best year in 1979, winning the Most Valuable Player award, NLCS MVP and World Series MVP award in leading the Pirates to the 1979 title.

A 10-time All-Star, five-time Gold Glover and two-time Most Valuable Player, Morgan helped the Reds to back-to-back World Series wins in 1975 and 1976. He also was the 2017 recipient of the James V. Day “Good Guy” Award from The American Legion Past Department Commander’s Club for his charitable work in San Francisco and Cincinnati.

"Mr. October" made a name for himself with his exploits leading to five World Series titles and two World Series MVPs, but the outfielder also dominated the regular season with 14 All-Star appearances and a 1973 AL MVP award. He played Legion Baseball in Pennsylvania.

A 12-time All-Star, Winfield did it with his bat and his glove, winning seven Gold Gloves and six Silver Sluggers. He helped the Blue Jays to the 1992 World Series title and was inducted on the first ballot to the Hall of Fame in 2001. He played Legion Baseball for the Attucks-Brooks Post in Minnesota and led his Legion team to three straight titles. He was named 1977 American Legion Graduate of the Year.

Murray amassed 3,255 hits and 504 home runs, making him one of just six members of the 3000/500 club in Major League history. Murray’s Baltimore Orioles won the 1983 World Series and he was invited to the All-Star Game eight times. Murray played Legion Baseball in California.

Named 1998 American Legion Graduate of the Year, "Mr. Padre" led San Diego for two decades as one of the best pure hitters ever. His .338 career batting average and eight batting titles came from a model of consistency, with the Hall of Famer never hitting below .309. He added 15 All-Star appearances and five Gold Gloves. He played for Arthur L. Peterson Post 27, Long Beach, Calif.

The Anderson, S.C., native amassed 2,452 hits while hitting .298 over his long career with the Red Sox. An eight-time All-Star and 1978 AL MVP, Rice got into the Hall of Fame on his 15th and final ballot.

Larkin grew up in Cincinnati and became a local legend, helping the Reds to the 1990 World Series. A 12-time All-Star, Larkin was named the 1995 National League Most Valuable Player. He earned nine Silver Sluggers at shortstop and added three straight Gold Gloves.

Smith went 5-1 to lead Natchitoches (La.) to a District 8 title in 1973. Smith retired in 1997 as the Major League’s all-time leader in saves with 468. The seven-time All-Star led the league in saves four times and he was the Rolaids Relief Man of the Year recipient three times. In 1991, Smith set a National League record with 47 saves and was runner-up for the NL Cy Young Award.