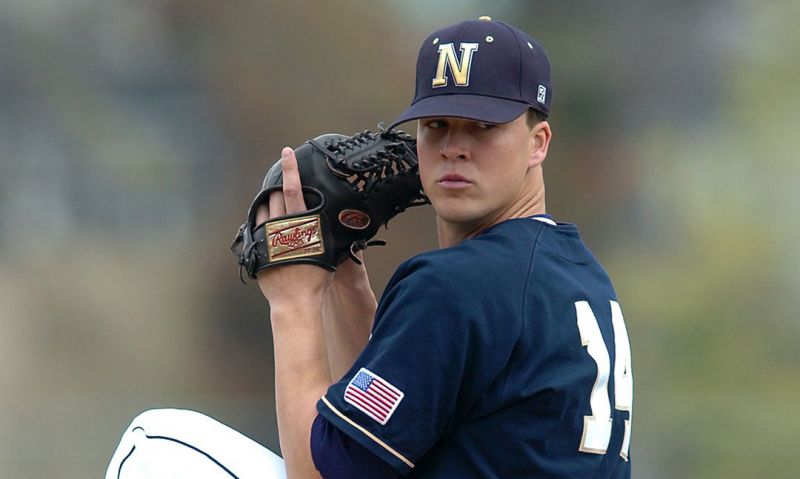 Hollywood screenwriters might reject the storyline for Mitch Harris' actual journey to major league baseball and call it unbelievable.

Harris' story involves improbable connections, unusual patience from a professional organization and the kind of individual perseverance one would expect from a military hero.

"I think more than watching his development as a player is knowing what he's done as far as his military service," said Appalachian State baseball coach Kermit Smith, who coached Harris for the Gaston Braves American Legion Post 144-266 baseball team. "The Naval Academy isn't for everybody.

"It's just really awesome to see him go through the process and handle it correctly. Then, to see him make it to the big leagues is just impossible. And he did it. His mental fortitude is just amazing."

Harris, who will turn 35 in November, set history in 2015 when he became the first Naval Academy product to play in the major leagues since 1921 and only the second overall.

By making the highest level of his sport, Harris joined a group that includes fellow Navy alumni like Roger Staubach (NFL) and David Robinson (NBA) in honoring his military commitment before turning professional.

If you ask Harris about his American Legion baseball career, he's just happy it helped give him the opportunity to play the sport after he graduated from South Point High School in Belmont, N.C., in 2004.

"It was a big learning experience for me because we had such a good group of coaches and good group of players and it really challenged me," Harris said of his two years playing for Post 144-266. "It showed me the things that I needed to get better in high school as well as to see if I had the opportunity to play collegiately."

In his first Legion season in 2002, Harris hit .263 with one home run and three RBIs while going 1-1 with two saves as a pitcher for a Braves team that went 20-13 and lost in the N.C. Area IV semifinals to eventual Area IV champion Hickory Post 48.

Smith was then the head coach at NCAA Division II Belmont Abbey and among Harris' teammates were eventual professionals Matt Camp, Jason Cline, B.J. Richmond and Matt Teague and several other future collegians. Among his opponents were eventual major league pitcher Daniel Bard of Pineville Post 337.

Harris had yet to develop into the 6-foot-4, 240-pound frame he would have as a major leaguer but was drawing attention from local colleges.

However, it was a chance visit from a football coach that changed Harris' fate.

Longtime Naval Academy assistant football coach Buddy Green was from nearby Stanley, N.C., and was recruiting some of Harris' classmates for that sport.

"It's kind of funny to look back and realize that I talked to Elon and Gardner-Webb and some smaller colleges like Blue Ridge Community College and Belmont Abbey," Harris said. "And it's even funnier to think I fell into the Naval Academy because the defensive coordinator for the Navy football team came to my high school to recruit."

Given his opportunity, Harris thrived at the Naval Academy and turned himself into a pro prospect.

In four seasons for the Midshipmen, Harris hit .295 with 16 home runs and 112 RBIs and went 20-13 in 36 starts as a pitcher with 291 strikeouts in 222 1-3 innings. He also earned Patriot League pitcher of the year honors and was twice named to the All-Patriot League team.

"At that time in 2008, they had an early release policy where you could apply for two years of active (service) and extend your reserve time," Harris said. "But then again in 2008, we were in the middle of a war (in Afghanistan) so as I graduated they put that on hold and didn't uphold it."

So, for the next four years, eight months and eight days, Harris fulfilled his commitment to the Naval Academy, rose to the rank of second lieutenant, was stationed in Norfolk, Va., and went on deployments in the Persian Gulf, Russia and on drug operations in South America.

Knowing the Cardinals had his rights and eager to get the opportunity to play pro baseball, Harris also spent considerable time making sure he would be ready once his military service was over.

"I told myself that if I could stay in shape, I felt like I could make up whatever I lacked in arm strength because I wouldn't have to worry about my body," Harris said. "So I threw on the flight deck as much as I could. There was a Dominican cook that was on our ship that I knew would throw with me."

By spring training of 2013, Harris was ready to show the Cardinals he was still worthy of their draft selection.

But it was the following season, 2014, where Harris showed he belonged in the big leagues.

"There was one bullpen session and it all just sort of clicked," said Harris, who was promoted from Class A Palm Beach, Fla., to Class AA Springfield, Ohio, to Class AAA Memphis in 2014. "I was with Randy Niemann, who was the pitching coach at the time. He was a former (New York) Mets pitcher and we just sort of looked at each other at the time and we laughed and thought, 'That's it. It just happened.'

"From that day forward, I knew there was going to be a change in how I felt and how I threw. From that point on, my arm slowly came back."

In the first month of the 2015 season, Harris was heading to the major leagues.

Promoted to the St. Louis Cardinals in late April from Class AAA Memphis, Harris made his major league debut on April 25 at Milwaukee.

Harris would go on to finish with a 2-1 record and 3.67 ERA in 26 appearances during his rookie season. He also was named the 2015 Stockton/Broeg Award winner for outstanding achievement in baseball at the St. Louis Baseball Writers Dinner.

"It was really cool to learn the history of it," Harris said. "I had no idea. Nemo Gaines had come right out of the (Naval) academy (in 1921) and pitched for the (Washington) Senators and then went on to active duty.

"It was just special to learn about - no pun intended - the boat that I had gotten on and that piece of history for my journey to the big leagues."

"People ask me all the time if I was heartbroken that I didn't get to play longer," Harris said. "I'd be lying if I said no. But I knew my playing career wasn't going to be as long as others because my path was different. And the percentages for me were minute in the first place.

"So, for me, to make it for a day or a week or seven years or 15 years didn't matter. I knew I was going to be happy and proud because we did it the right way.

"From not even knowing if I'd ever get an opportunity to play college baseball out of Mount Holly and Belmont to just getting a chance to play professionally to even having a shot of playing in the big leagues and realizing a childhood dream is really special.

"What an opportunity it was and how blessed and fortunate am I to have the opportunity to do it."