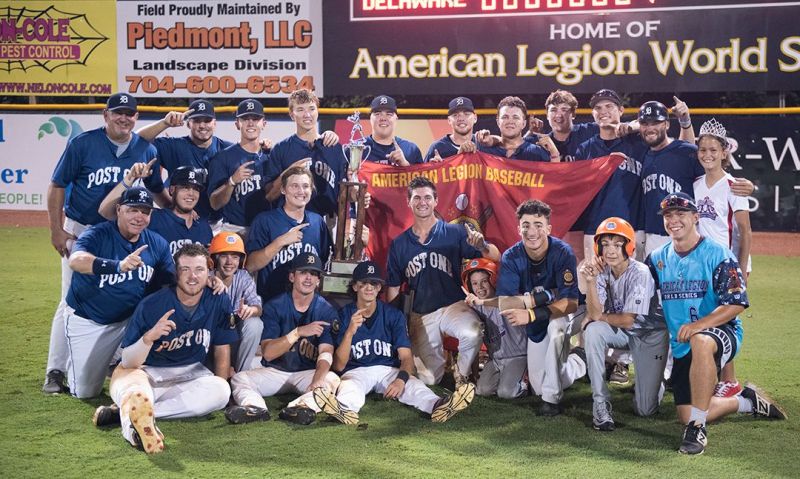 And while Brent Treml is no longer Post 1’s head coach, he says the memories he and his players have from becoming the first Delaware team to win the ALWS, with a walkoff 1-0 win over Las Vegas, remain vivid today.

“It sounds crazy but the further we got, the easier it became,” said Treml, who now works for a technology company in Delaware. “There was some pressure on us in the state (tournament) because we knew we had a good team.

“But we had the confidence that we deserved to be there and we were just going to see how far we could take this.”

Treml thinks his team was so confident because of the steps it took in the three years leading up to its advance to the World Series.

After going 1-2 in the 2017 Mid-Atlantic Legion Regional won by Hopewell, N.J., Wilmington entered 2018 knowing it could dream big.

“It's like when I came back home and was talking with my friends,” Treml said. “They were saying, ‘Were you nervous?’ And I'd say we had more pressure trying to win the state because the expectations were high after we’d won in 2017. If we hadn't have won the state tournament it, would've been a disappointment.”

But Post 1 managed that pressure, going 4-1 in the regional — downing Leesburg, Va., 10-0 in five innings in the title game — before arriving in Shelby for the 2018 World Series.

Only a 5-4 loss to “Stripes” division champion Gonzales, La., kept Post 1 from an unbeaten title run.

Perhaps that close shave helped Wilmington more than they realized as Wilmington edged Braintree, Mass., 4-3, to advance to the single-elimination semifinals, then took two more one-run victories to take their title.

Post 1 edged tournament unbeaten Midland, Mich., 5-4 in the semifinals, then won their championship with the dramatic 1-0, eight-inning win over Las Vegas.

World Series MVP Chris Ludman, who had a three-hit shutout of Dubuque County, Iowa, 3-0, on the first day of the tournament, starred on the mound and at the plate in the title game. He threw a four-hitter on the mound and had a sacrifice bunt that moved eventual winning run Michael Cautillo into scoring position.

Austin Colmery then followed with a game-winning single that brought Cautillo in with the winning run as the overflow capacity crowd of 8,350 at Veterans Field at Keeter Stadium roared its approval. The base hit also gave Colmery the Rawlings Big Stick Award with his 20th total base in regional and World Series competition.

The celebration and a defensive gem by shortstop Nate Thomas in the top of the eighth inning were two of the top 10 plays on ESPN's SportsCenter later that night.

“The further we got, the less pressure we felt,” Treml said. “And the kids made it feel that way. They were very mature for their age. They didn't put added pressure on themselves. They approached World Series games the same as they approached a state tournament game or a regular season game. They had the same mindset all season long.”

Since winning the title, many players and coaches have gone in different directions. But, as Treml says, they have stayed connected — both figuratively and literally.

Treml became pitching coach at NCAA Division II University of the Sciences in Philadelphia for the 2019 season before taking a job at Endevor, which creates technology systems for nuclear power plants and utility companies.

Treml, who turned 32 in March, was replaced by his former assistant Mark Wilhelm as Post 1 head coach.

“I talk to Nate Thomas a couple of times a month - and Marshall Awtry and Michael Cautillo,” Treml said. “And it's nice that so many guys went to Delaware so I can go see them play. St. Joe's plays Delaware every year. It's kind of neat to see Nate Thomas face (pitchers) Chris Ludman and Jack Debecq. And the college I coached at last year was in the same conference as Wilmington College and Goldey Beacom so it was fun to coach against some of those guys.”

Treml, who played for Post 1 in 2007, is a legacy player in that his father Bob Treml played for Wilmington Post 1 in the late 1960s.

It meant Treml knew the long odds Post 1 faced when it got to Shelby in the 2018 World Series.

“When we got to Shelby, the atmosphere was amazing,” Treml said. “You feel like a rock star for a week. We were confident we could win and we did. It's a memory that our coaches and players will take away forever.”