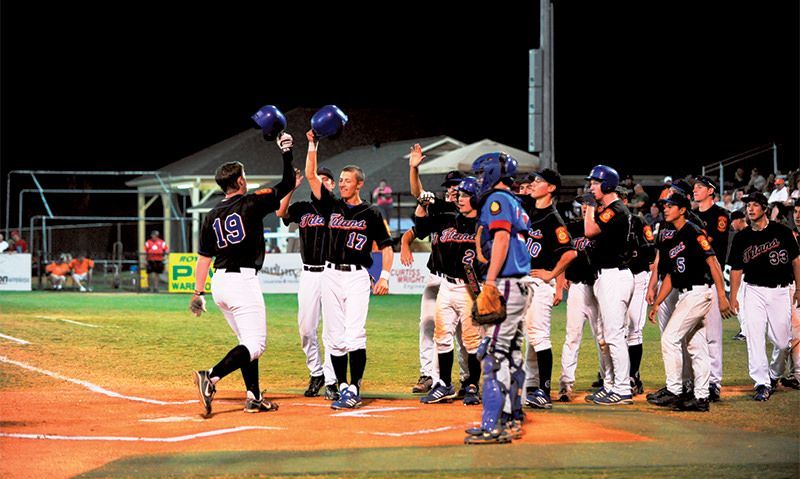 And if you ask former longtime high school coach Tom Wright, the answer is quite simple: Baseball has always been big in Shelby and Cleveland County.

"You know those old sayings about baseball being the king and all that," said Wright, who played for Shelby Post 82 when it hosted the 1957 and 1958 regionals. "In Shelby, that was true. Back then, baseball was what we had here in Shelby. And several thousand people would come to the games. They were packed in there everywhere."

But Wright, the son of a Shelby major leaguer by the same name, says baseball was the first sport that gained the area's attention — and still does so today.

"Having the (American) Legion World Series here has made baseball a main attraction," he said. "But it's always been big in this community and still is based on all the support the World Series gets here."

Wright played when the old Sumter Street stadium that is still used by Shelby Middle School was the city's football and baseball stadium. It hosted national American Legion events in 1940, 1946, 1957 and 1958. The current Shelby stadium — Veterans Field at Keeter Stadium — is a baseball-only facility that has hosted national events since 2002.

Here's a look at the American Legion events Shelby hosted before the city became permanent World Series host in 2011:

San Diego swept St. Louis two games to none in a semifinal series that sent the winner to the American Legion World Series against Albemarle, N.C.; Albemarle would beat San Diego three games to two in a best-of-five series for the championship.

The biggest eventual star to play in the tournament was Norfolk, Va., pitcher Chuck Stobbs.

A three-sport star in Norfolk, Stobbs would go on to play 15 years in the major leagues and is most remembered for yielding a 565-foot home run to New York Yankees' slugger Mickey Mantle that flew completely out of old Griffith Stadium in Washington, D.C.

Memphis, Tenn., won a four-team event before losing the next week in a sectional tournament.

Memphis also again had McCarver and Gagliano for a team that edged host Shelby 4-0 in front of 4,238 fans in the title game.

Third-place Richmond, Va., featured one of the top two-sport athletes of the era in football running back-baseball outfielder Ken Willard.

Willard, who was named honorable mention all-tournament, would go on to play football and baseball at the University of North Carolina before being a 1965 first-round NFL draft pick (No. 2 overall selection) of the San Francisco 49ers. Willard would go on to rush for 6,105 yards in 10 NFL seasons with the 49ers and St. Louis Cardinals.

Dothan, Ala., took the eight-team event by knocking off pre-tournament favorite Rowan County and host Shelby on back-to-back nights in single-elimination semifinals and finals, respectively.

Dothan, which would lose in the semifinals of the American Legion World Series hosted in Danville, Va., was led by eventual Birmingham Southern standout Ronny Woods.

The tournament is most remembered for what happened months later as champion Garner Post 232 had its title vacated for using an ineligible player.

Runner-up Caldwell County had several eventual college players on its roster and one future major leaguer in then-14-year-old Madison Bumgarner. Bumgarner was a 2007 first-round draft pick of San Francisco who led the Giants to three World Series titles before signing a free agent contract with the Arizona Diamondbacks before the 2020 season.

Price also was a member of the University of South Carolina's back-to-back College World Series champions in 2010 and 2011.

A fifth-round pick of the Tampa Bay Rays in 2009, Malm would play nine years professionally and spent all or parts of two seasons at the Class AA level.