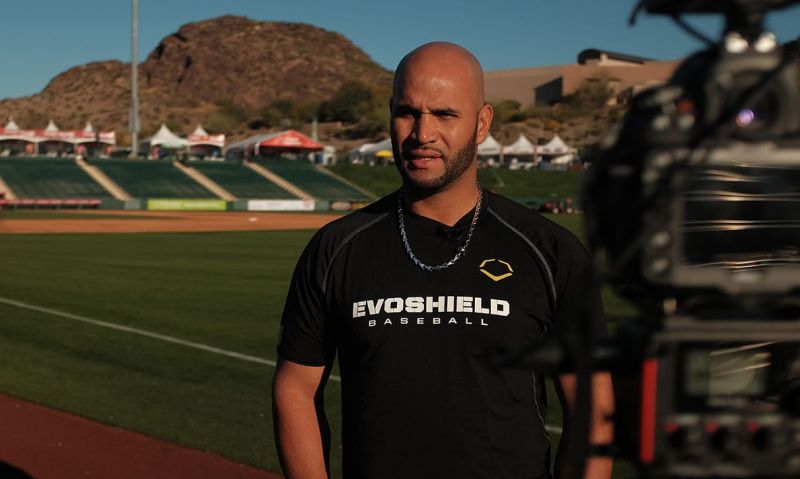 Albert Pujols of the Los Angeles Angels shares his stories about his experience with Legion Baseball as he is interviewed during spring training in Phoenix, Ariz. on Friday, Mar. 6. Photo by Lucas Carter/The American Legion.

Pujols homered twice in the Los Angeles Angels' 6-2 win over the Texas Rangers. Pujols' first home run of the night, his 661st career home run, broke his tie with Hall of Famer Willie Mays for fifth-place on the all-time MLB home run list. Pujols had tied Mays earlier in the week.

Pujols homered again in his next at-bat.

Last month, Pujols — the oldest active player in the major leagues — moved into second place on the official career RBI list with an RBI single against the Houston Astros on Aug. 24. Pujols has 2,097 career RBI; Hank Aaron leads the list with 2,297. While Babe Ruth has 2,281 RBI recognized by Baseball Reference, Major League Baseball only counts 1,989 as MLB does not count career RBI before 1920 because it was not an official statistic.

Pujols spent 11 seasons with the St. Louis Cardinals, where he was a three-time National League MVP and nine-time All-Star. And he played American Legion Baseball for Post 340 in Independence, Mo., after immigrating to the U.S. from his hometown of Santo Domingo, Dominican Republic.

In a 2015 interview with The American Legion, Pujols talked about his experience in American Legion Baseball. “It was a great experience. It was something that helped me out with my game later on. … You play with the best competition around the area.”