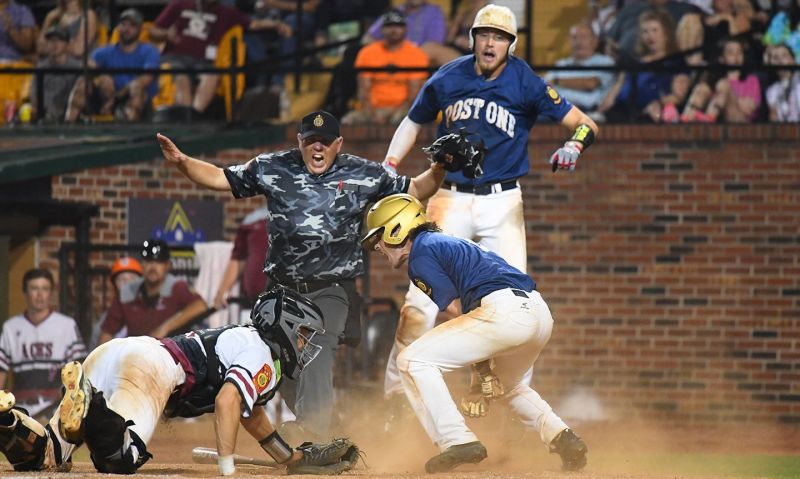 The American Legion World Series has called Shelby, N.C., home every year since 2011.

In the spirit of ESPN SportsCenter's daily top 10, here's the moments that we most remember.

The stadium itself has changed over the years as more than $6 million, mostly through donations, has renovated the Veterans Field at Keeter Stadium complex virtually every year since 2002.

No one has been more impressed than Chad Holbrook, who played at the stadium during his Shelby High and Shelby Post 82 career from 1987 to 1989.

Chad Holbrook is currently the head coach at College of Charleston and a former head coach at the University of South Carolina. He's also the son of American Legion World Series chairman Eddie Holbrook.

"Every time I drive by that stadium, I just can't believe my eyes," Chad Holbrook said. "And I'm proud because I know it's taken a lot of work from a lot of people."

When the facility opened, it had 1,000 seats (most of them on concrete pavement) with no covered seats and a tiny press box. The facility now has a seating capacity of 5,500 with canopies over much of the seats and a spacious Lowe's World Series headquarters down the right field line.

Hosting an event in August in the piedmont of North Carolina means it’s virtually impossible not to see torrential rain and powerful lightning.

And Shelby has endured postponements and/or significant delays in five of the last nine years.

No storm was more powerful than the one that moved the 2019 title game from a Tuesday late afternoon start to a Wednesday morning, 10 a.m. restart.

"You know, we come from an area of the country where our spring seasons have crazy weather," Alexander said. "We usually start our spring season with snow on the ground and a shovel in our hands. So we have a lot of early-season weather situations and the kids are kind of used to that.

"But I'll tell you this: That Shelby rain was like nothing that we had ever witnessed. I don't think I've ever seen rain that hard. The grounds crew at the Shelby stadium did a phenomenal job in getting that field ready."

In 2012, they picked up another championship after taking three dramatic victories on the first three days of the tournament and when their star pitcher fired a rare shutout in the title game.

New Orleans edged Milford, Conn., 5-3 in 11 innings in their opener; Omaha, Neb., 8-7 in the second game; and Brooklawn, N.J., 6-5 in their third game. The win over Omaha ended in dramatic fashion as New Orleans catcher Matthieu Robert tagged out the would-be tying run on a perfect throw from rightfielder Mitch Alexander.

After Post 125 lost 10-6 to Bellevue, Wash., in the next-to-last day of the double-elimination tournament, Emerson Gibbs fired a three-hit 4-0 victory for New Orleans over Brooklawn in the finals. The effort earned Gibbs, a Tulane University recruit, most valuable player honors in a tournament in which overall American Legion World Series attendance surpassed 100,000 for the first time with 101,925 total fans.

The schedule of the third day of the tournament was altered twice by weather and saw three games limited from nine innings to seven innings.

When the tournament format changed to pool play in 2014, it meant teams could possibly lose two of their three games, win a tiebreaker and advance on to win a title.

Henderson, Nev., became the first and so far only team to do so in 2017 when they advanced out of the "Stripes" division to top "Stars" division champion Bryant, Ark., 7-3 in the semifinals and beat previously unbeaten "Stripes" champion Omaha, Neb., 2-1 in the final.

Henderson's final victory avenged a 9-1 loss to Omaha on the opening day in which it allowed 21 hits (one off a tournament record). Henderson then edged Shrewsbury, Mass., 1-0 and lost 1-0 to Midland, Mich., before advancing by tiebreaker rules.

Shane Spencer fired a three-hitter against the same Omaha team that battered Henderson pitching on the first day of the tournament to earn MVP honors. The winning run came on Nick Thompson's sixth-inning sacrifice fly in a tournament in which overall attendance of 120,924 is currently fourth all-time for the event.

As much as Henderson's feat of coming out of pool play with a losing record remains unprecedented, perhaps the development with the biggest lasting impact was caused by the threat of rain. The national office chose to switch from the nine-inning games that have been played since American Legion Baseball began in 1926 to seven-inning games on the second day of the six-day tournament. Now with pitch count rules that make it hard for most pitchers to last nine innings, the rule have been adopted for national tournaments and by virtually every state since then.

Three days after losing its only game of the 2015 season, Chapin-Newberry, S.C., ended a 79-year title drought for its state.

Spartanburg in 1936 had been the last South Carolina team to win a World Series title.

To do so, Chapin-Newberry came from behind in three of its victories.

In the championship game, tournament MVP Justin Hawkins’ two-run first-inning home run — his third home run of the tournament — gave Chapin-Newberry a lead it would never lose in a 9-2 victory over New Orleans, La.

The contest was played in front of the largest championship game record crowd (8,826) since 1949 and capped an American Legion World Series with then-record overall attendance of 117,072.

New Orleans had advanced to the finals by scoring twice in the bottom of the 10th inning to eliminate two-time defending champion Brooklawn, N.J., 4-3.

But 2013 and 2014 — his first two seasons not managing the team — became Brooklawn's opportunity to pay the coach back for all of his success.

Barth Sr., who was unable to attend the 2013 American Legion World Series and died at 93 on March 1, 2014, would've been the proudest of anyone as his team won back-to-back titles under the direction of his son Dennis Barth.

With a rain suspension and pitch-count rule costing it a top pitcher, Idaho Falls, Idaho, still had enough to set history.

Post 56 completed a 5-0 run through the six-day tournament with a 5-3 victory over Fargo, N.D., to become Idaho's first-ever American Legion World Series champion.

Idaho Falls trailed 2-1 after one inning before torrential rain suspended the title game to the next morning at 8 a.m. local time for Post 56.

It also meant Randon Hostert, a major league draft pick bound for the University of Utah, wouldn't be able to return the next day.

No matter for Idaho Falls as Andrew Gregersen relieved and limited Fargo to one run over the final six innings and Post 56 rallied for the victory.

Despite a light crowd for the morning finale, the tickets sold number of 127,798 is second all-time.

Eden Prairie was routed 14-3 in eight innings by the 10-run "mercy rule" on the tournament's first day before winning five straight games to take the title.

That included a rally for a 5-4, 13-inning victory over Tupelo, Miss., in the championship game. That contest came just hours after Eden Prairie, Minn., had edged Las Vegas, Nev., 2-1 in an elimination game, meaning Eden Prairie survived 22 innings of action on the tournament's final day.

In the title game, Tupelo scored four in the bottom of the first innings before Eden Prairie pitchers held Post 49 scoreless for the next 12 innings.

Tournament MVP Blake Schmit hit a home run to aid the comeback that forced extra innings and the shortstop also was involved in a game-determining play when his tag on a pickoff play all but ended Tupelo's dreams of a comeback.

The tournament was making its second visit to Shelby and a new overall attendance record was set with 86,162 fans. That broke the previous record of the estimated 60,000 who attended a three games to two series victory by Spartanburg, S.C., over Los Angeles at Spartanburg's Duncan Park.

After excessive rain in the Mid-South Regional, Texarkana, Ark., advanced to the 2016 American Legion World Series on tiebreakers after their title game was rained out.

Once in Shelby, Texarkana again lost their tournament opener before rallying to win the next four games to take the title.

In that championship game played in front of 8,496 fans, most of whom were cheering for Rowan County, N.C., Texarkana trailed 4-0 after four innings before rallying to force extra innings.

Then after scoring four times in the top of the 12th, Texarkana held off a furious Rowan County rally to win 8-6.

The game ended with the bases loaded.

With an overall attendance of 121,197, a new record was set for the sixth straight year.

In a game that produced two actual SportsCenter top 10 plays, Wilmington, Del., set history in multiple ways in 2018 with the most dramatic finish to a title game in American Legion World Series history.

An overall attendance record of 128,307 was set while Wilmington's 1-0 win over Las Vegas, Nev., gave Delaware its first-ever American Legion World Series title and one of the major awards was won by virtue of the game's final play.

Wilmington shortstop Nate Thomas turned in the first gem when he went head over heels to field a grounder, then tossed a high arc throw to first baseman Eric Ludman to end the top of the seventh with the game still scoreless.

The play seemed to generate momentum as Wilmington scored in the bottom of seventh, Michael Cautillo drew a walk, advanced to second on Chris Ludman's sacrifice bunt and scored on Austin Colmery's single.