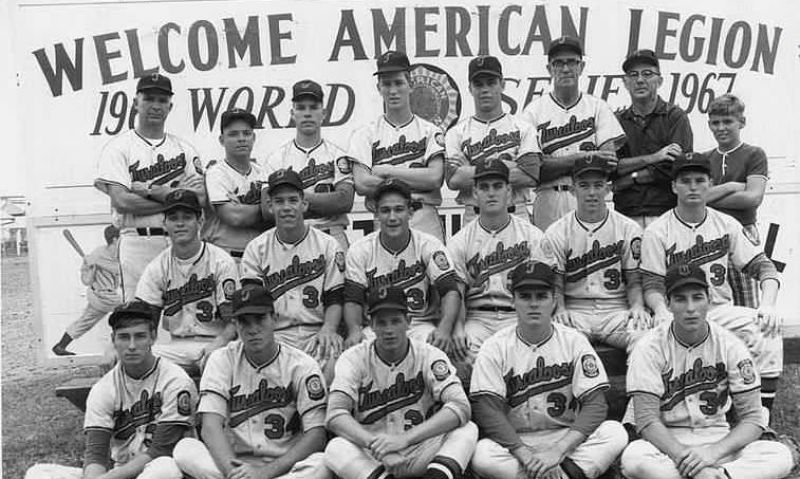 When most folks think of Tuscaloosa, Ala., they think of the national championship-winning University of Alabama football program, three Super Bowl-winning quarterbacks who played for the Crimson Tide and the iconic coaches that have led the program to its greatness.

But the town also is home to a historic American Legion World Series champion.

That would be the 1967 Tuscaloosa Post 34 team that also finished runner-up the year before.

Post 34 has won an Alabama-record 26 state titles, with nine of those coming with the help of the Rushing family — father Johnny Rushing and son John Rushing.

The first of those is the historic 1967 title as surprise starter Johnny Rushing threw a one-hitter in a 1-0 championship game victory over Northbrook, Ill., in the American Legion World Series held in Memphis, Tenn.

Just a year earlier, many players on the Post 34 team had endured the heartbreak of a 4-1 loss in the 1966 ALWS title game played in Orangeburg, S.C.

Johnny Rushing was not on the 1966 team. In fact, he was one of the last players on the 16-player 1967 team, so much so that he considered leaving the team in the middle of the season — or before he made two of the best pitching performances in ALWS history to lead Post 34 to its title.

"I had thought about quitting and talked to my dad at the time," Johnny Rushing said of his discussion with James Rushing. "I said, 'I think I can play with this bunch but I'm not getting the opportunity.'

"He said, 'Well, this is your choice: You can stick it out or you can quit and I'll have plenty of work for you to do in the garden.' So my choice of playing baseball or working in the garden was an easy choice."

Another factor working in Post 34's favor was that its pitching coach, Mike Griffin, had coached Little League and Babe Ruth League baseball with James Rushing a few years earlier.

After losing 5-1 to Greensboro, N.C., in Post 34's second game, workhorse left-hander Marlin Homan saved a 4-3 win over College Park, Ga., then started and won back-to-back victories over Staunton, Va., and Timmonsville, S.C., to send Tuscaloosa to the ALWS.

"We struggled some there," Johnny Rushing said of the regional that was played 120 miles away from Tuscaloosa in the eastern part of the state. "What I remember is that it rained so much that they would pour gas on the infield and burn the infield off and pull a helicopter in there to dry it off. They about burned up the entire infield grass just to give us a chance to play."

Homan picked up three wins and a save during 23 innings of work with 23 strikeouts and one run and 18 hits allowed in the regional.

Homan was again the starter when Tuscaloosa opened the ALWS in Memphis, Tenn., with a 3-0 victory over Northbrook, Ill.

Instead, Wright came down with an illness and Johnny Rushing started instead.

The late notice apparently was no problem for Johnny Rushing as he fired a three-hitter with 10 strikeouts in a 3-1 victory.

After Post 34 outlasted Wilmington Manor, Del., 3-1 in 12 innings, then lost 5-0 to Northbrook, Ill., manager Jerry Belk had a decision to make for a winner-take-all finale against Northbrook.

"Actually, I was the No. 4 pitcher on the team," Johnny Rushing said. "I was more of a mop-up pitcher throughout the season. And when our right-handed pitcher (Wright) ended up getting sick and wasn't able to make the start against Klamath Falls, I ended up getting the start.

"I guess I did good enough that when it came time again, they gave me another shot."

Johnny Rushing still recalls the confidence he felt while warming up pregame alongside Griffin.

He came mighty close as he limited Northbrook to three hits, faced 28 batters and never let a runner get past first base in the 1-0 victory.

"Anyhow, when it was all over, (coach Griffin) said, 'You missed it: You faced 28 batters,'" Johnny Rushing said with a chuckle. "They got three hits and we ended the game on a double play. (Catcher) Randy Ryan threw one out trying to steal. So they never reached second base on us."

Tuscaloosa scored in the seventh inning when Bo Baughman doubled, advanced to third on a wild pitch and scored on pinch-hitter Woody Sexton's RBI infield single.

When the Post 34 team returned home, they returned to a city that had just observed legendary coach Paul "Bear" Bryant lead the Crimson Tide to three national titles (1961, 1964 and 1965) in the previous six seasons and an 11-0 record in 1966 that many Alabama fans deserved possibly another title instead of the Crimson Tide's final No. 3 ranking.

On Oct. 4, 1967, Johnny Rushing and his teammates were among the 34,796 at Boston's Fenway Park — U.S. senators Robert F. Kennedy and Ted Kennedy also were among those in attendance — to see the St. Louis Cardinals edge the Boston Red Sox 2-1 in the first game of the World Series. St. Louis would win four games to three in one of the most dramatic World Series of all-time.

"I remember seeing (former Omaha, Neb., American Legion Baseball standout) Bob Gibson of the Cardinals go when he was in his prime," Johnny Rushing said. "It was all big and exciting for us. I had never seen a World Series game so it was a big thrill for us to be close to the major leaguers like that."

Innes was a two-time All-Southeastern Conference pitcher who still holds school career records for ERA (1.98) and shutouts (seven) and played on the Crimson Tide's 1968 SEC championship team that lost to N.C. State and Florida State in the district tournament held in Gastonia, N.C.

Woodruff, an All-SEC catcher in 1972, eventually became the only professional on the 1967 Post 34 team. Woodruff was a free agent signee of the Cleveland Indians in 1972 and he hit .282 with 22 home runs and 130 RBI in 221 games in four seasons in the minor leagues at the rookie, Class A and Class AA levels.

Yet, while Tuscaloosa was 1967 ALWS champion, the players and coaches had never received championship rings — until 40 years later.

That's when then-Post 34 coach John Rushing, the son of Johnny Rushing, surprised his father and his teammates after holding a secret fundraiser.

"It was very important to us," said John Rushing, now assistant athletic director at Chipola, Fla., College and a former director of baseball operations at Troy University in Alabama who was a 10-time Alabama state champion American Legion Baseball coach. "They didn't get rings back then so our Post 34 team in 2007 raised money for them to get those rings. That was important to me to get to do that for my dad and his teammates.

"And tied in with that, (rival) Dothan Post 12 made a donation to get coach Belk his ring. So it was a cool experience all the way around."

Johnny Rushing, who was head coach for Tuscaloosa Post 34's 1989 state title team, said he and his 1967 teammates were delighted by the July 2007 ring ceremony that coincided with a 40-year reunion of the team.

"That was a big surprise for all of us," Johnny Rushing said. "You know, my son headed that up and it meant a lot. That was one of the best things I remember. I can always say now that I've got a national championship ring."

In John Rushing's last season at Tuscaloosa, he also gave his post and his father another memorable moment.

During a long trip that included games in Tennessee, Kentucky, Indiana and Illinois, Tuscaloosa played in a tournament in the Chicago suburb of Northbrook — and against the team Post 34 had beaten twice in three meetings in the 1967 ALWS that included the title game.

Johnny Rushing made that trip and was honored by Northbrook.

"We went to Illinois and they people there were real nice," Johnny Rushing said. "They introduced me to the crowd and I got to throw out the first pitch."

In the 2000s, Dothan, Ala., joined Tuscaloosa as the only other Alabama team to advance to the ALWS; Post 12 won the 2002 Southeastern Regional over host Shelby, N.C., and won the Southeastern regional again in 2005 in an event it hosted. (Dothan finished third in the 2002 ALWS in Danville, Va., and finished eighth in the 2005 ALWS in Rapid City, S.D.)

"I've worked so hard as a coach to try and have another Alabama (ALWS) championship team," John Rushing said. "I remember meeting with members of the Legion post, especially in the mid-2000s, and every time I would get introduced, they would say, 'He's the son of the guy who pitched for Tuscaloosa on the 1967 World Series championship team.'

"And I used to tell my team, 'Can we get to a point where we win one of those things so I can get to the point when he's the dad of the guy who coached the World Series champion?'

"So we're very proud of that 1967 team but getting back there has always been something that we've wanted to do and accomplish."