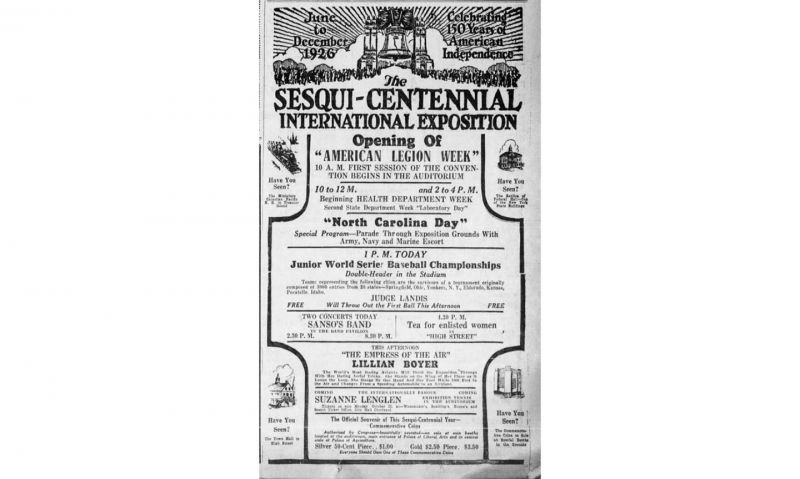 When the American Legion World Series returns to Shelby, N.C., this August, it'll mark the 94th time the event has been held.

Few startup events could've had more fanfare and attention than the first American Legion World Series in 1926. (There was no ALWS in 1927 or 2020).

Held Oct. 11-13 to coincide with the annual American Legion convention held in Philadelphia, the event took place at a historic stadium.

The field of four teams came after 16 states competed in stadiums across the country to advance to the first ALWS.

Yonkers, N.Y., was the first champion — and its team of 13 players had to play the most national tournament games of any team in the field.

Not all states with teams competed in national tournaments but those that did knew they would be playing for the country's first youth baseball national championship.

With its roster of 13 players, Yonkers had to navigate two games against regional competition just to advance to the Eastern sectional held at Pelton Field in its home city.

Called the "Yonkers Recreation Nine" in newspaper stories of the day, the team defeated Passaic 11-5 in Belmar, N.J., and Central Falls, R.I., to advance to the Eastern sectional. There, Yonkers knocked off Rutland, Mass., 12-11 in 10 innings to advance to the first ALWS.

The site of the first American Legion World Series was the brand new Sesquicentennial Stadium.

Opened on April 15, 1926, as part of the Sesquicentennial International Exposition, it was later renamed Philadelphia Municipal Stadium and John F. Kennedy Stadium before it was demolished in 1992. The Wells Fargo Center that is home to the Philadelphia 76ers and Philadelphia Flyers now stands on the site, which is part of a complex that also includes the Philadelphia Eagles' Lincoln Financial Field and the Philadelphia Phillies' Citizens Bank Park.

A regular home of the Army-Navy football game from 1936 to 1979, the old stadium was home to the NFL, world class track events, Temple University football, the first five Liberty Bowl contests, championship boxing matches and hundreds of concerts among its many events.

Less than a month before the first ALWS, a crowd of 120,557 watched Gene Tunney capture the world heavyweight boxing title from Jack Dempsey during a rainstorm.

Yonkers Mayor William A. Walsh created much of the fanfare for his team's journey to play in the 1926 ALWS.

A former Notre Dame football standout, Walsh attended the team's games and sat in a box occupied by then-Philadelphia Athletics manager Connie Mack and president Tom Shibe. Mack would in 1937 be voted for induction into the Baseball Hall of Fame as part of the inaugural class.

He wasn't the only celebrity to attend the 1926 ALWS.

In the first ALWS games, Pocatello beat El Dorado 7-5 and Yonkers beat Springfield 8-2 on opening day in front of 1,100 fans.

On the second day, the crowd grew to 2,500 as Pocatello eliminated Springfield 8-7 and Yonkers eliminated El Dorado 18-1 in five innings.

In the championship game, in front of a crowd of 3,000, Yonkers defeated Pocatello 23-6.

Yonkers' offense was the story of the first ALWS as it banged out 56 hits and scored 49 runs in three days. Yonkers scored at least one run in 16 of the 21 innings in which it batted.

But McCormick, who had seven hits in the ALWS, was hardly alone.

Ray House, Joseph Fitzgerald and O'Brien were the starting and winning pitchers in the three ALWS games for Yonkers. First baseman Jeff McDonald and right fielder Arthur Brill were the other starters for Yonkers. Other team members were Patrick Leahy and John Ferris.

According to the Sept. 10, 1926 Yonkers Herald, "by virtue of a forfeit game from Manhattan, the local (Yonkers) team has the distinction of representing the entire Empire State (of New York) in this tournament."