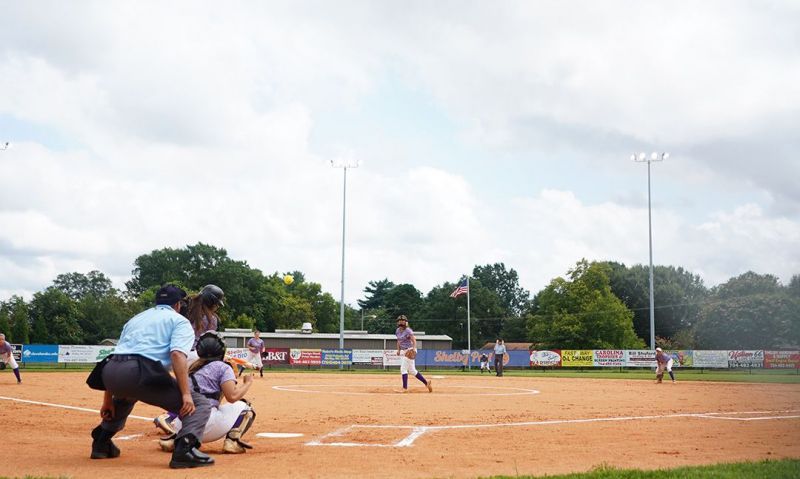 And his passion led him to start the North Carolina American Legion Lady Fastpitch Softball League.

"It's just a passion I've had and a dream I've had for a long time," Hasson said. "When I told the (American) Legion guys that I would run it and that I had the passion to do it, I think that gave them the confidence to know that they had somebody to do it."

Hasson and his son Wesley's pursuit of a summertime program for girls softball began shortly after Hasson coached his daughter's team to the Big League Softball World Series in Delaware.

"I have always had a passion for fastpitch softball and knew the girls needed a competitive summertime program, especially after Little League discontinued their Big League program," Hasson said. "And I started thinking, what better honorable organization than American Legion to get the girls involved in. And I'm part of it. And so we got started with the process."

North Carolina started with an unsanctioned softball league in 2017 with 11 teams.

The program kept growing after it was sanctioned by the Department of North Carolina, growing to 60 teams in 2019. The 2020 season was canceled due to the COVID-19 pandemic.

"Our motto is American Legion fastpitch: Putting softball back into the community," Hasson said. "I've done it for 30 years — travel, recreation and high school baseball and softball. Girls have never had the opportunity to represent their communities on a platform like American Legion Baseball had and I thought this was a great opportunity for them to do that."

Concord won the first two state titles in 2017 and 2018 that were hosted at Morganton's Catawba Meadows Park, then Cumberland County won the 2019 championship in Shelby.

"The interest in it is off the chain," Hasson said. "We have gone from 11 teams in that first year to potentially 91 teams last year with interest in playing."

A military veteran himself, Hasson worked and retired as the parks superintendent for several years for the city of Morganton, N.C.

One of his duties? Maintaining Shuey Field that is home to Burke County Post 21 American Legion Baseball.

"I talked to Ronnie several times because he was on the baseball committee," said Hasson, whose younger son Ryan played for Post 21 when Swink was the coach. "I kept telling him, 'We need to do this and we need to take it to the state.'"

When Hasson retired from coaching high school softball after the 2016 season, he had more time to devote to American Legion softball along with his son Wesley, who is Burke County Parks and Recreation athletic director. Wesley also is an SAL member at Hickory Post 48.

"My son Wesley and I presented it to the Legion (in the fall of 2017) and we tried to get it sanctioned," Hasson said. "We knew several coaches around the area. Richie Canipe in Shelby is someone who I'd talked to about my idea for several years. So he supported me and he helped me get teams and coaches from around western and central North Carolina and we had 11 teams.

"That first core group of coaches all really believed in my vision. They knew we weren't sanctioned but we knew that season's success would determine the future of the program. And so we got it sanctioned to start play for 2018."

Keener and Boyles made a motion to forward the proposal for a sanctioned softball league to the Department Americanism Commission (DAC) and its chairman David Shore. Shore's committee approved the motion and forwarded it to the Department Executive Committee (DEC) who then voted to sanction the program in the fall of 2017.

"Normally, it takes more than one meeting to get something approved," Hasson said. "But because Gaither Keener, Terry Boyles and the department saw the benefit in what we were doing and the concept of the program, Gaither directed it through the proper committees and we were able to get it sanctioned at that conference."

Hasson looks forward to the continued success of the program at the department level.

"My goal from all of this is to hopefully have a program that's thriving for these girls and enjoy the same longevity (100 years), success and recognition as American Legion Baseball continues to have."